The Jackson is an excellent smallmouth bass, rock bass, rainbow trout, and brown trout fishery above Lake Moomaw. Below Gathright Dam, six public areas provide access to 18 miles of legally navigable water to Covington. Riverfront land owners have brought successful civil trespass claims against anglers fishing in the two portions of the river highlighted on the map (see the Maps section). In light of these court actions, anglers may find it advisable to seek the permission of the riverfront property owners.

Wild rainbow trout, wild brown trout, smallmouth bass, rock bass (redeye), and redbreast sunfish populate the tailwater below the dam. All rainbow trout between 12 and 16 inches and all brown trout less than 20 inches must be released immediately. Four trout (combined rainbow and brown) limit per angler daily, only one of four can be a brown trout. Also, there are no fishing gear restrictions between Gathright Dam and the water treatment plant in Covington.

Large, lake-run rainbow trout can be caught in the Jackson River above Lake Moomaw during the winter and spring. Much of this stretch is privately owned, so be sure you are fishing on National Forest property or have landowner permission. The Jackson River, through Hidden Valley, provides ample trout fishing opportunities, especially a three-mile reach of special regulation water above the Muddy Run swinging bridge. 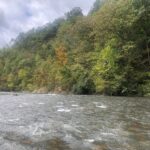 The Jackson River tailwater is considered by many to be the premier wild trout tailwater in Virginia. 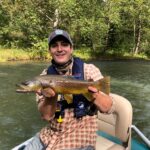 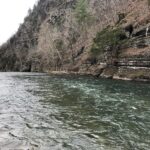 Deep riffles and rock bluffs are a common sight on the Jackson River tailwater. 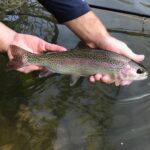 Wild rainbow trout are plentiful in the tailwater downstream of Gathright Dam on the Jackson River. 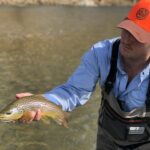 There are 6 public access points on the Jackson River below Gathright Dam. Brown trout like this are relatively abundant in the tailwater.