The Rivanna, which is an abbreviation for “River Anna”, was named after the Queen of England. It’s an appropriate moniker for one of Virginia’s prettiest small rivers that has a regal history, including the honor of being the State’s first governmentally-designated Scenic River.

The headwaters of the Rivanna lie in the foothills and mountains west of Charlottesville, actually reaching the Eastern border of Shenandoah National Park. Its importance as a transportation artery in the 1700s and 1800s is well known, and remnants of the aqueducts, canal, locks, and tow paths that facilitated this use can still be seen today. Because of its natural beauty, history, and location near Charlottesville, the Rivanna has attracted a lot of attention from conservationist groups and the public, in general.

In fact, The Rivanna Conservation Society was formed by concerned members of the public to help protect this priceless resource. It’s a valuable source of information for anyone interested in learning more about the River and/or getting involved in its conservation. Among other things, it sponsors a program that monitors water quality and general stream health along the entire length of the Rivanna to its confluence with the James River at Columbia. Additional information regarding the Rivanna can be found at the Rivanna Conservation Alliance website.

Darden Towe Park off of Route 20 in Charlottesville has a fair canoe launch that consists of a sandy bank. The take-out at Riverview Park on Chesapeake Street in Charlottesville consists of a wooden staircase up the bank. Parking is good, but Park regulations prohibit overnight parking at both locations. This is a relatively short canoe trip that is fairly scenic, but provides no rapids and can be negotiated by canoeists and kayakers of all skill levels.

Put-in at Riverview Park consists of a wooden staircase up the bank and take-out off of Randolph’s Mill Road near Milton is poor and consists of a mud bank. Parking is good at both locations, but is prohibited overnight at Riverview Park. This is a very scenic section of the river that has several Class II and III rapids.

The put-in near Randolph’s Mill Road at Milton is relatively poor and consists of a mud bank. The take-out, however, is a well-designed concrete boat landing provided by the Virginia Department of Game & Inland Fisheries. Parking is good at both locations and is not prohibited overnight. This is a very long, but easy float that can be handled by novices. There is only one Class I-II set of rapids. If done in a single day, this float does not allow for much fishing time.

Both the put-in (Route 600 crossing at Crofton) and take-out (Route 15 crossing near Palmyra) are well designed concrete or gravel boat landings owned and maintained by the Virginia Department of Game & Inland Fisheries. Parking is good at both facilities. This is a very scenic section of the River that has only one Class I-II rapid, and so is easily navigable by novices. The distance makes for a nice day of relaxed paddling and fishing.

Once again, both the put-in at Palmyra (Route 15 crossing) and the take-out at Columbia on the James River (off Columbia Road, aka Rt. 690, near the Town of Columbia) consist of excellent gravel or concrete boat landings owned by the Department of Games & Inland Fisheries. Once again, the scenery makes for an enjoyable day. This float is spiced up with several Class I-II rapids and one Class II-III drop, so be sure to have someone of an intermediate skill level along. This is the longest float and care should be taken to avoid getting stuck on the water after dark.

Fishing can be excellent along any stretch of the Rivanna River, and the river contains a nice diversity of species for its small size. More than anything, river flows, water temperature, and your abilities to read the water and evaluate habitat will determine your fishing success. Smallmouth bass is, by far, the most highly sought-after species in the Rivanna. Although fish up to several pounds do occur, most of the fish in your catch will be in the ten-inch-class, with a 12-incher showing up here and there. Largemouth bass can be found in some of the quiet backwaters of the River. Redbreast sunfish are abundant in the River and can provide excellent ultralight-tackle action. Other species likely to be encountered by anglers include bluegill, fallfish, rock bass, green sunfish, and black crappie. As with redbreast, the fish are generally of small to moderate size, but they can provide a lot of action over the course of a day’s fishing. Fishing for channel catfish can be outstanding in the Rivanna River, especially at night or when the river runs turbid after a soaking rain. Most catfish are eater-sized fish (10-20 inches), with the occasional lunker (8lb+) lurking in the river. While floating the river angler will occasional see large common carp, longnose gar, schools of gizzard shad, and some large suckers of various species.

Fishing can be good most any time of year, and of course, is dependent on recent weather patterns. However, weather and river flows generally yield the best fishing conditions from March through October. Spring can be a great time to fish the Rivanna if recent rains haven’t muddied the water. Summer is great as well when adequate rainfall keeps the river from falling too low. Although the river can be floated under low-flow conditions, navigation can be difficult, and it can be tough to complete a day-trip through some of the longer stretches between access points. Current flow data for the Rivanna can be found on the internet at the following link: USGS. Additional information regarding the Rivanna can be found at the Rivanna Conservation Alliance website.

The Rivanna River first becomes navigable for canoes and kayaks as its two main tributaries, the South and North forks, approach Charlottesville.

A short distance downstream from their confluence, the Rivanna can be accessed in the City of Charlottesville at Darden Towe Park, operated by Albemarle County. This park contains a canoe launch and a variety of other facilities, such as playgrounds and a picnic shelter.

It’s a relatively short float of a couple of miles down to the next public access at Milton, just south of the I-64 Bridge crossing. Specifically, it’s located where State Route (SR) 22 crosses the River just west of its intersection with SR 250. This is simply an old roadbed that was retained by the County to provide access to the River. Parking is limited, and canoes and kayaks must be carried or dragged approximately 50 yards to reach the River.

The next access point downstream is at Crofton Bridge, and this is owned and operated by the Virginia Department of Wildlife Resources (DWR). The stretch of the Rivanna between Milton and Crofton Bridge measures approximately 11 river miles. With strong river flows, this can be covered in five hours or so. But, this is a lot of water to cover in one day if fishing is planned. Be sure to start early and space your fishing out so that you’ll have time to hit a lot of the best looking spots.

The next access point at Palmyra is also owned by the DWR. The Crofton Bridge to Palmyra float covers approximately seven river miles and makes for a nice day’s trip, including fishing. Because this is the easiest section to float in a day, it gets the most fishing pressure. From Palmyra downstream to its confluence with the James River, the Rivanna travels around 16 miles.

The closest public access at the end of that float is just across the James at Columbia. Given the length of this float, you’ll have to limit your fishing to prime water. Although these are the only formal access points for the Rivanna, there are many road crossings that can facilitate access for a limited number of vehicles. Anglers using the road crossings as access point must be very careful that they are well off the road shoulder as not to impede traffic and must be sure they are not trespassing across private property to access the river. 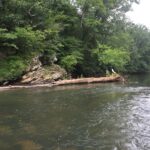 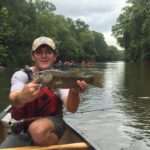