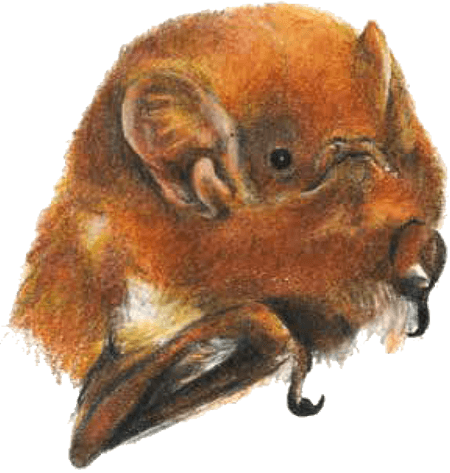 Few people realize that through the study of bats scientists have gained valuable knowledge on sonar, coagulation in blood, vaccine development, and artificial insemination.

The fruit bats of the tropics play an important role in pollination and seed dispersal of many fruits and nuts we eat on a daily basis. The insect-eating bats of temperate zones are major predators of night-flying insects and help keep insect populations in check.

Like people, bats belong to the Class Mammalia, meaning they bear their young live, feed their young milk, and grow hair. Bats, however, are unique in that they are the only mammals capable of sustained flight.

Because they can fly, they have been placed in their own Order, Chiroptera, which means “hand wing.” This makes sense when you look closely at a bat wing and see that it is half arm and half hand. The upper arm and forearm are relatively proportional to the bat’s body, but the fingers are greatly elongated. Because a bat can move each finger independently, their flying skills rival those of birds. A bat can hover in place, fly backwards, stoop, dive, and roll as needed. All of these maneuvers may be necessary when pursuing a highly evasive moth. 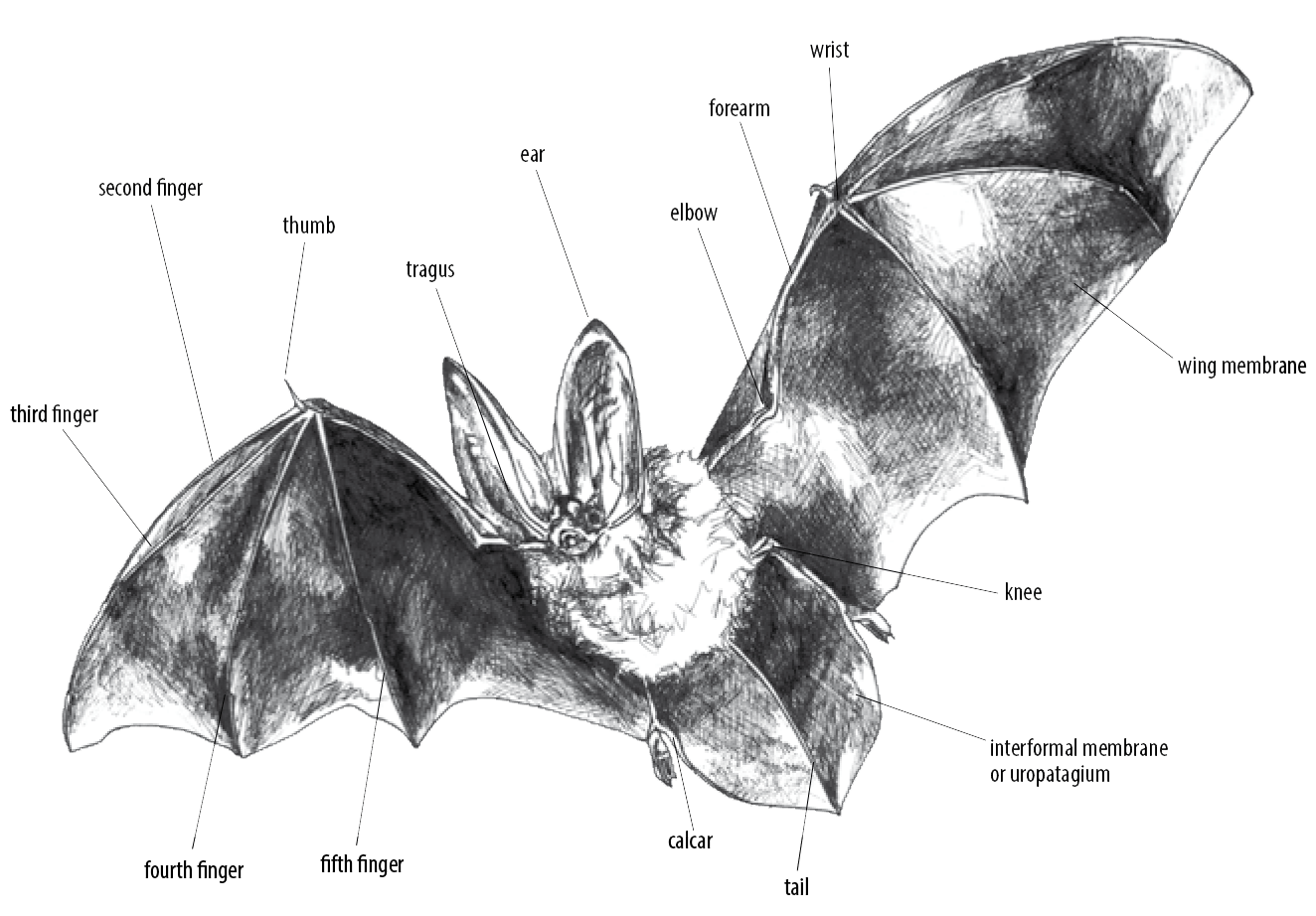 Basic structure of a bat.

Whether from a global or local perspective, bats are a truly unique group of mammals. There are over 1,000 species of bats worldwide, most of which are found in the tropics. Bats are second only to rodents in their number of species, and they comprise almost 25% of all species of mammals. Forty-five species of bats are found in North America, of which 19 occur in the eastern U.S., and 17 have been documented in Virginia. Scientists place bats in two major groups, the Megachiroptera and the Microchiroptera. The Megachiroptera are often referred to as the fruit-eating bats or flying foxes. These bats are generally found in southeast Asia, Australia, and the southwest Pacific. They have big eyes, smaller ears in proportion to their head, dog-like faces, and are rather large bats, some with wingspans up to six feet. Most of these bats feed on fruit and use their sense of smell and sight rather than echolocation to find food. Megachiroptera play an important role in fertilizing and disseminating seeds of many plants and trees. Some of the trees that benefit from the Megachiroptera include cashew, breadfruit, plantain, guava, fig, clove, mango, balsa wood, banana, and peach.

The Microchiroptera are often referred to as the insect-eating bats, and they make up the majority of the bats in North America. They have small eyes, large ears in proportion to their heads, pug-like faces and are generally small, with wingspans less than two feet. Most of these bats feed on insects and use echolocation to find their prey. These bats are major predators of night flying insects and make a great “natural insecticide.” Some Microchiroptera can eat up to 3,000 insects in one night. If you picture several of these bats feeding in your backyard, you can imagine your insect problem being “gobbled up” rather quickly.

Tree bats typically spend the winter months hibernating in cavities in trees. In addition, they can be found in woodpiles, under loose rock, in rock crevices, and occasionally in caves.

Cave bats, as the name implies, hibernate in caves and, depending on the species, will either form large clusters or hibernate individually or in small groups.

There are a couple of other features that distinguish tree bats from cave bats.

Tree bats tend to have a fully furred tail while cave bats have a naked tail. Having a furred tail makes sense if you’re going to hang around in a tree where it might get windy and cold. Tree bats will use their furred tail as a coat when temperatures drop. Tree bats are typically solitary roosting bats during both the hibernation and maternity seasons, while cave bats often form large clusters during winter hibernation.

In summer, female cave bats form small maternity colonies, raising their young under the loose bark of a tree or in a tree cavity. Female tree bats, on the other hand, generally raise their young independently, hanging in dense foliage in trees.

Finally, tree bats typically bear twins while cave bats generally produce only one young per year. Some tree bats like the red bat have been known to produce litters of up to four young. 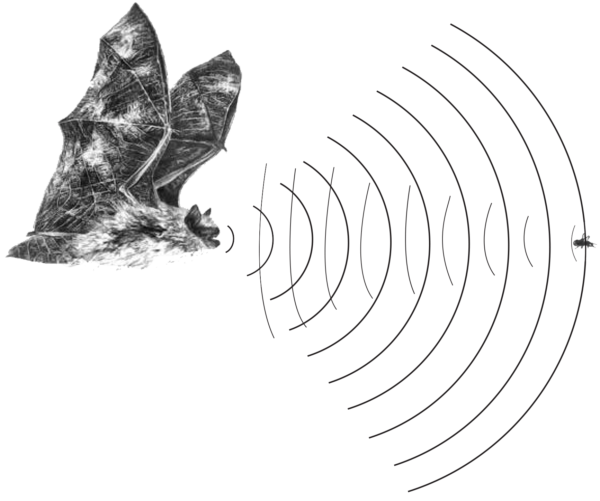 All Virginia bats navigate by echolocation to find food. By emitting a high frequency pulse that travels out and bounces off an object and then returns to the bat, they are able to determine distance, size, and direction of the object.

Most of the sounds are emitted through their mouth, but bats can emit sounds through their nose. Their ears are sensitive enough to detect slight differences in the time required for an acoustic pulse to return to each ear: this difference tells the bat the direction of the object. Similarly, the time required for an echolocation pulse to return tells the bat how far away the object is. Bats vary the frequency of echolocation pulses they emit depending on their activity.

If they are chasing a moth for dinner, they will increase the number of pulses emitted as they get closer to their prey. This provides the bat with detailed information on direction and distance to the prey. This is very important when a bat is chasing a moth that is in an evasive maneuver, not wanting to become dinner!