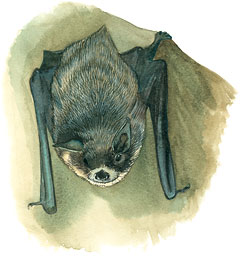 Another winter has come and gone and the negative impact of white-nose syndrome (WNS) on Virginia bat populations continues. While few surveys of hibernating bats were conducted this past year in order to minimize disturbance to already declining bat populations, new evidence of the spread of WNS was documented. Scott County was added to our list of WNS confirmed counties and additional WNS positive caves were added to counties already known to house the deadly disease. It now appears that Lee County is the only county in the mountain region of the state where WNS has not been documented. Because the WNS fungal spores are typically not present during the warm seasons Virginia has few records of bats with WNS symptoms outside the mountain region. Of the eight species of bats that hibernate in Virginia, only the Virginia big-eared bat has not been confirmed to contract the WNS disease.

Other research in Virginia designed to understand the spread of WNS has confirmed the continued decline of the two most common cave hibernating bat species, the little brown bat and tri-colored bat. Virginia is assisting the USGS National Wildlife Health Center with a study to look at the persistence of WNS fungal spores in caves and mines in the eastern United States. As part of this effort bat counts were conducted at the survey sites, documenting the continued declines in little brown and tri-colored bats. At these sites little brown bats declined from a combined high of just over 5,000 individuals in 2009 to 1,266 in 2011, to just 125 individuals in 2012, a decline of over 95% in four years. Tri-colored bats showed a similar decline from a high of 388 individuals in 2009 to 42 in 2012, a decline of almost 90%.

A sick bat found in Pocahontas State Park has tested positive for a fungus indicating White-Nose Syndrome (WNS), the disease killing bats from New Hampshire to Virginia and Tennessee. This is the first occurrence of the fungus detected in this bat species (southeastern myotis) which is found in only a few counties in southeast Virginia. The U.S. Geological Survey’s National Wildlife Health Center in Madison, Wisconsin, found the bat to be positive for the fungus but was unable to confirm WNS, calling it “likely” to be infected.

In addition to probably adding to the growing list of bat species known to have WNS – including Indiana and gray bats – this discovery extends the potential spread of the disease. The southeastern myotis bat extends from Virginia south to Florida, west to eastern Texas, and north to Indiana and Illinois. Despite the extent of the range, the bat does not occur across these states and is considered a species in decline. The discovery of the fungus in the southeastern myotis bat now brings concerns for the spread of WNS through the South, potentially affecting other species during hibernation.

Although the Department is reaffirming the request that recreational cavers and cave owners help Virginia’s bat populations by reducing cave traffic until more is learned about this syndrome, VDGIF, the Virginia Department of Conservation and Recreation (DCR), the Virginia Cave Board, and cooperators have adopted the following guidelines and recommendations to reduce the spread of white-nose syndrome in Virginia.

The Virginia Department of Game and Inland Fisheries reports white-nose syndrome (WNS) is now suspected to be in three more counties in the Commonwealth. Once confirmed, this will bring the total number of counties with WNS in Virginia to five. The three new counties are Cumberland, Bland, and Rockingham. Specimens from all three localities have been sent to the U.S. Geological Survey National Wildlife Health Center in Madison, Wisconsin. The center had previously confirmed WNS in bats from two caves in Bath and Giles counties.

The Cumberland County bat was found by an individual who contacted the Department to identify the species. The photograph revealed that bat had signs of the fungus associated with WNS. The Bland and Rockingham bats were found in caves in those counties.

Department biologists are working with other state and federal agencies to determine what steps to take to address this issue. The Department is also working with cave owners and caving groups to contain the spread of the fungus and to educate the public about what is known about white-nose syndrome.

To learn more about white-nose syndrome, visit the following resources: