Hunters reported harvesting 2,988 bears during the 2021–2022 bear hunting seasons in Virginia. The 2021–2022 bear harvest was approximately 14% lower than the harvest the previous year and 16% lower than the statewide harvest reported during the 2019-20 record season; however, it was only 1% lower than the previous 5-year average during 2016–2020. A lower proportion of the 2021-22 season harvest consisted of female bears (44%) than the previous year (47%). Significant harvest decreases during the 3-day early firearms season (35%) and archery season (35%) were the main contributors to the overall decline in the 2021-22 statewide bear harvest. The youth/apprentice weekend harvest decreased by 13% and the firearms season decreased by less than 1% from the 2020-21 season. The muzzleloader season actually increased by 2% from the previous season (see table).

The decrease in bear harvest during the 2021–2022 season could have resulted from several factors, including the unusually warm and relatively dry weather throughout the season (especially during the early and archery seasons) and spotty acorn crops that may have contributed to decreased bear movements early in the seasons and reduced vulnerability to hunters. In addition, recent firearms season expansions (2017 and 2019) as well as the 3-day early firearms season (established during 2017) were designed to reduce bear populations in much of western and northern Virginia. As bear populations decline, harvests are expected to decline within subsequent years. Lastly, notable drops in harvest in certain northwestern counties could be related to sarcoptic mange, a parasitic skin disease in bears. There is currently no evidence, in Virginia or elsewhere, that the disease limits bear populations over the long term; however, other states have observed cyclic outbreaks of mange that can impact local bear populations for several years. Harvest may also be decreased if hunters avoid hunting or taking bears in areas where mange is more prevalent. The Department considers mange and its potential implications on black bears an important issue and continues to gather reports, conduct investigations, and collaborate with other states to develop potential long-term management strategies and assess possible impacts on bear populations.

The 2021–2022 season was the first during which hunters could only check bears through the DWR electronic checking systems using phone, internet, or mobile applications. The majority (62%) of hunters reported their bear harvest using the mobile application, 31% called in their harvest by phone, and 7% reported their harvest using the internet. The quality of harvest data received during the last three seasons indicate that the electronic reporting system is an effective method of data collection, including submission of teeth for aging bears.

Summary of 2021–2022 Black Bear Harvest by Season in Virginia 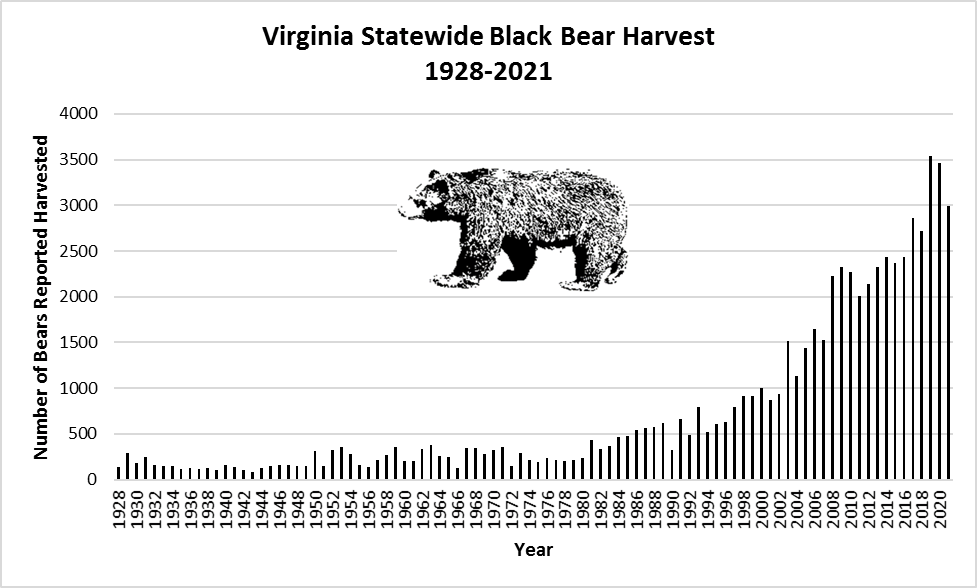