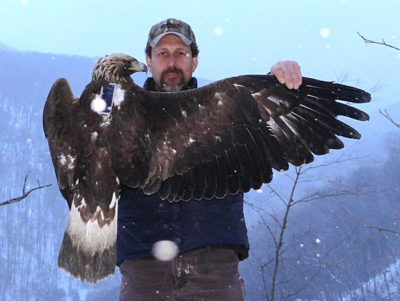 Although segments of the golden eagle population in the western United States have been extensively studied, relatively little is known about golden eagles east of the Mississippi. This small and potentially vulnerable population has largely “flown under the radar” of both the birding public and the research community. Increasing awareness of the significance of this population is one of the goals of the Eastern Golden Eagle Working Group, an international partnership founded in 2010 in order to address research gaps and gather basic information on the distribution and ecology of this magnificent raptor. As a prominent and active member of the Group, the Virginia Department of Game and Inland Fisheries (DGIF) is engaging in golden eagle research in the mountains of Virginia.

Golden eagles may be confused with immature bald eagles due to similarities in size and coloration. Both species undergo a sequence of molts in their first four years that allow for identification of individual birds to age class. These immature birds are dark brown, with white areas on the wings and tail. Adult birds are entirely dark brown except for the rear crown, nape and sides of the neck, which are of the golden color which gives the bird its name; there are also gray bars on the tail and pale areas on the wings and the rear underparts.

The golden eagle occurs throughout Europe, Asia, northern Africa and North America. Within North America, the species breeds primarily in the western half of the continent, from Alaska south to Central Mexico. A smaller, geographically isolated and potentially distinct population breeds in northeastern Canada, and is thought to migrate through the central Appalachians of New York and Pennsylvania and winter in Virginia, West Virginia and neighboring states. Its winter range in Virginia is primarily associated with the Appalachians, although some birds may also be found in the Coastal Plain and records exist for the Piedmont. 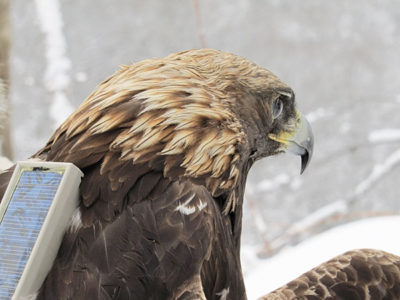 Eastern golden eagle migration is strongly associated with the Appalachian ridgelines, and the majority of golden eagle records during this period are generated through fall hawk-watch stations. In Virginia the birds can be seen migrating southward between October and early December, and northward during April and May. Wintering eagles spend the months of December through March in the Commonwealth. Although Highland County is arguably the most popular Virginia destination for viewing golden eagles during the winter, the birds are likely distributed across suitable sites along the entire Ridge and Valley.

Within Virginia and the broader Appalachian range, wintering golden eagles are primarily associated with small forest openings along ridgelines, although they may also be seen soaring over the valleys between ridges. During the winter months they feed on medium-sized mammals such as rabbits and scavenge on carcasses. Very little is known about their movements during this period, and basic data is needed relating to habitat use, winter range size and other aspects of their ecology.

Since 2010 DGIF researchers have partnered in a collaborative project that uses cutting-edge cellular GPS-GSM transmitters to track the movements of individual birds throughout the year. Within Virginia, the primary goals of this project are to 1) determine winter habitat associations, landscape use and ranging behavior of golden eagles; determine migratory pathways throughout the Ridge and Valley; and evaluate the potential impacts of wind energy development on Golden eagles during the winter and migration periods. 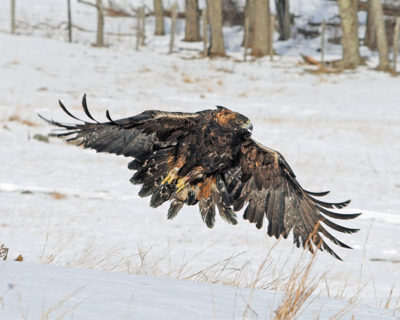 Golden eagles are trapped using rocket nets at sites baited with road killed deer. Birds are weighed, measured and banded, and outfitted with a GSM telemetry unit affixed to a backpack harness. The devices collect data on the location of individual birds at 15-minute intervals during the winter and summer months. This will allow researchers to calculate the size of individual winter home ranges and breeding territories and to characterize habitat use patterns. During migration the backpack units collect data points every 30 seconds. Researchers will use this more intensive data set to model the flight characteristics and patterns of individual birds during this period, which sees the birds spending the greatest proportion of their time in the air. It is during migration that golden eagles may be most vulnerable to potential collisions with wind energy structures.

The research in Virginia is part of a broader project examining the ecology of golden eagles throughout their annual cycle. Project partners are studying the winter ecology of the species in other parts of their central and southern Appalachian range; examining migration ecology of golden eagles in the central Appalachians of Pennsylvania and New York; and collaborating with colleagues studying the breeding biology of the bird in southern Quebec. Project partners include an array of state and federal agencies, universities and non-governmental organizations within the United States and Canada (primary partners for the Virginia portion of the study include West Virginia University, Penn State University, Conservation Management Institute at Virginia Tech, US Forest Service [George Washington National Forest] and National Park Service [Shenandoah National Park]). These diverse partners together comprise the Eastern Golden Eagle Working Group, whose work is designed to broaden our knowledge of the small golden eagle population in the eastern United States and to increase awareness of its conservation needs.

A golden eagle is flying free again after being injured. View this video showing its first flight—on February 16, 2011—after a month of rehabilitation. 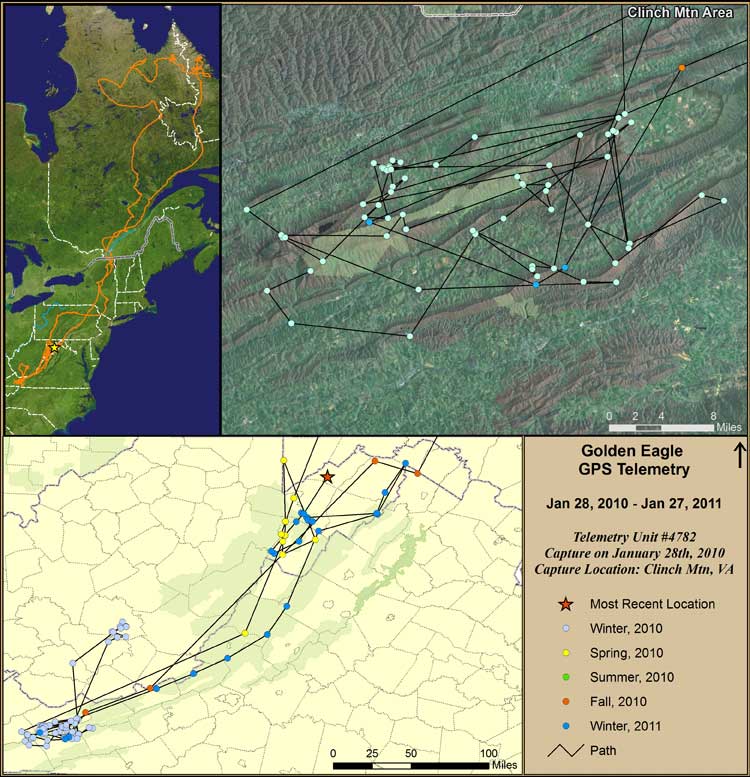