What DWR is Doing for Seabird Conservation in Hampton Roads

The Commonwealth of Virginia, through the VDOT, is undertaking one of the largest projects in its history — the expansion of the Hampton Roads Bridge-Tunnel. The boring of new tunnels and corresponding expansion of South Island has necessitated that many changes occur on the island to accommodate construction activities and equipment. Due to these efforts, the areas of the island previously used by the seabird colony are no longer suitable or safe for the birds. 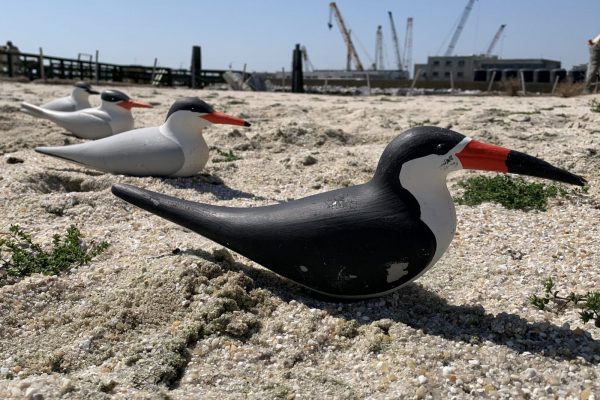 The DWR has created new habitat for the displaced colony. In the short-term, the DWR converted the parade ground on Rip Raps Island (adjacent to South Island) from grass to a sand/gravel substrate. Using barges covered with a sand/gravel mix, an artificial island is annually anchored in the embayment between South Island and Rip Raps Island. Biologists use “social attraction” techniques to lure the birds to these new locations. The DWR is also working with the U.S. Army Corps of Engineers to explore the feasibility of using spoils from dredging operations to create a brand new, permanent, artificial island near the current nesting area.

The complex of bird species within the colony is indeed impressive and the result of a combination of factors, including an absence of predators, an abundance of forage in the surrounding waters and the availability of suitable habitat resulting from management efforts carried out by the Virginia Department of Transportation (VDOT) under careful guidance from the late Ruth Beck, Professor Emeritus, at the College of William and Mary and more recently from the Virginia Department of Wildlife Resources (DWR).