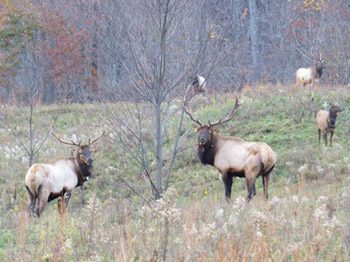 Feeding wildlife, particularly herd animals such as elk, can have serious negative consequences for the health of the population. Supplemental feeding of herd animals artificially concentrates animals in a small area, increases opportunity for disease transmission, and reduces their natural fear of humans.

It is illegal to distribute food, salt, or minerals to feed or attract deer or elk year-round in Wise, Dickenson, and Buchanan Counties, as well as in the counties (including the cities and towns within) listed on this page.

In the remainder of the state, it is illegal to place or distribute food, salt, or minerals to feed or attract deer or elk from September 1 through the first Saturday in January. It is also illegal to put out these substances to attract deer or elk during any deer or elk season within any county, city, or town that allows deer or elk hunting. This prohibition does not include the planting of agronomic crops or wildlife food plots.

Regular feeding or baiting of elk can increase a population beyond the habitat’s normal carrying capacity. The artificial population increase can lead to habitat damage, including over browsing of vegetation and suppression of plant regeneration. Heavy browse damage caused by elk can lead to negative impacts on both habitat and other wildlife species using the area.  Also, exotic plants that are less preferred by elk may eventually out-compete more valuable native plant species that elk prefer.

Feeding elk can cause abnormal behaviors that put them and/or humans at risk. Risks include:

Feeding or baiting can unintentionally expose elk to toxic substances.  Of particular concern: