Good Fire How DWR Uses Fire to Restore the Wild 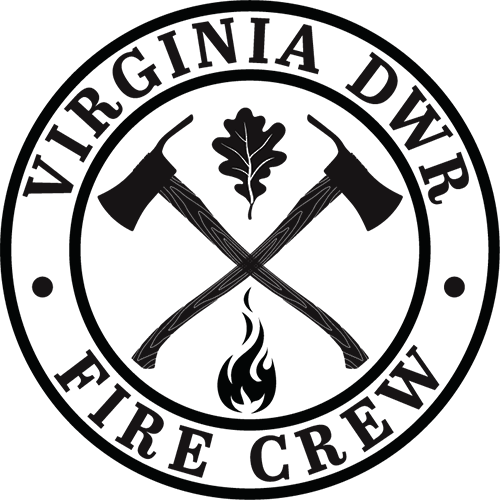 Prescribed fire is a lot of work, from the burn planning and preparing the burn site by constructing fire lines prior to the burn, to the coordinated effort on the day of the burn, to debriefing and site monitoring after the burn. You might be surprised to learn that the Virginia Department of Wildlife Resources’ prescribed fire crew doesn’t include any full-time fire professionals. Instead, specialists from all divisions of DWR join forces on the burn crew, including fisheries biologists, wildlife biologists, Wildlife Management Area supervisors, Conservation Police Officers, and others! They make time for #GoodFire assignments in between their “real” jobs. 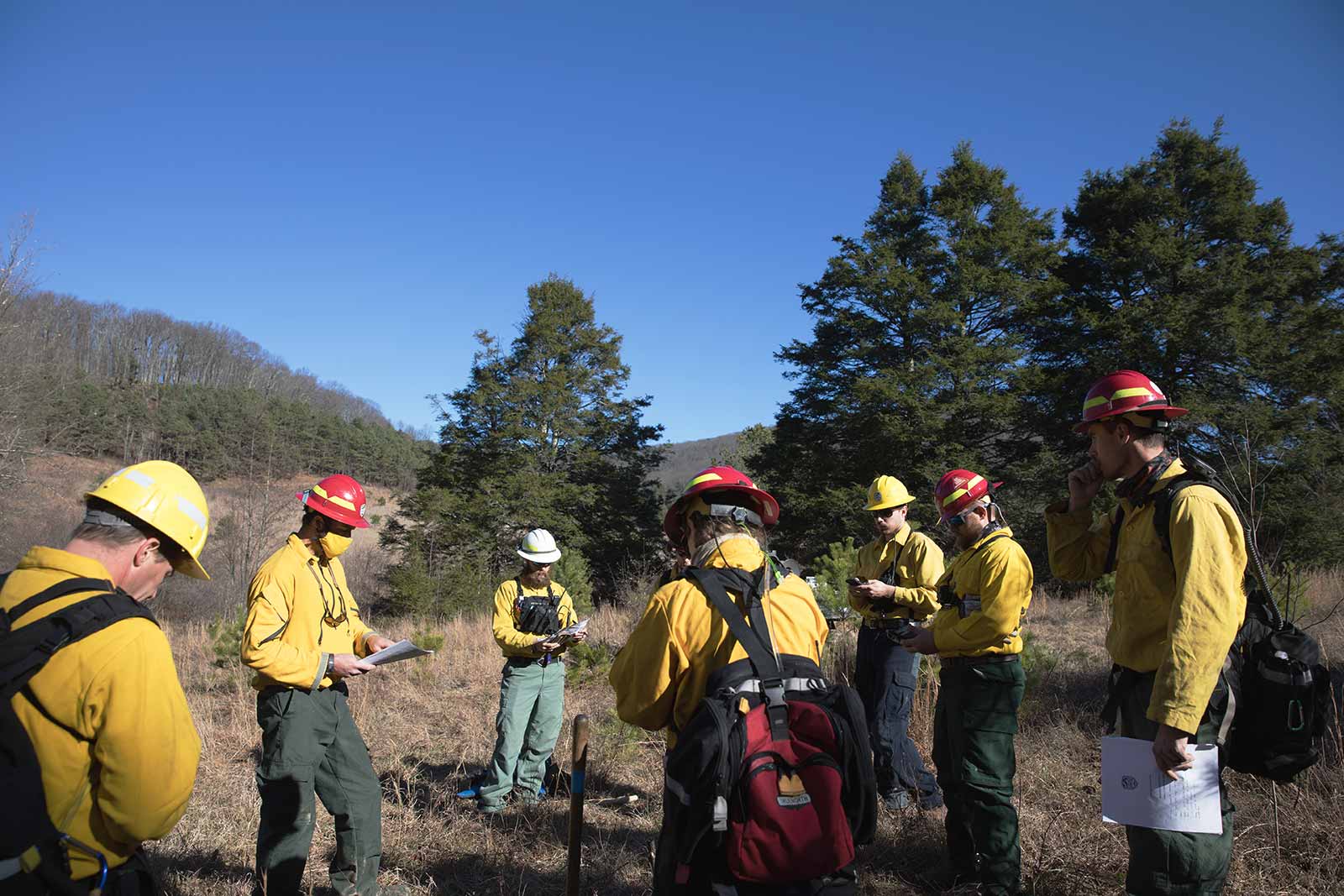 “It’s actually fairly common in the prescribed fire community to have people that are not necessarily what you would traditionally think of as a fire-oriented person,” said Mike Dye, a DWR district wildlife biologist who has served on the DWR prescribed fire team for 13 years. If a DWR staff member expresses interest in joining the fire crew and is willing to go through the training, they’re welcome to burn.

“If we have folks from our traditional game programs working in burning alongside next to folks with a non-game emphasis, that helps us all have a broader perspective,” said Stephen Living, the DWR Region 1 Lands and Access Manager who is a burn boss for DWR. 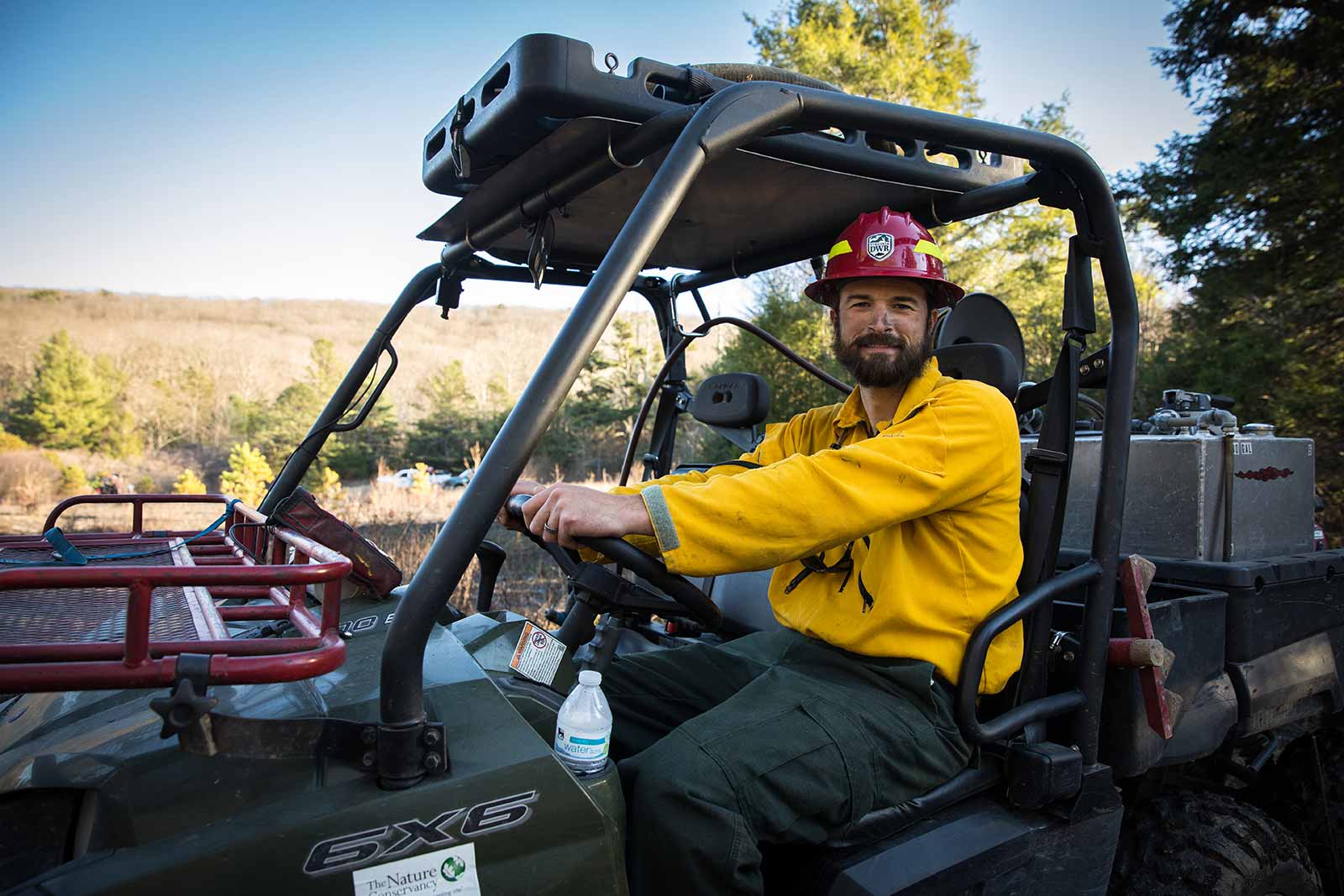 “There’s a certain type of person who finds burning interesting because it’s a really dynamic habitat management tool,” said Living. “It requires a lot of focus and manual labor. It’s usually a long day, and it’s hot or cold and really smoky. Our staff are required to pass what we call the moderate work capacity test, but we encourage them to qualify at what we call the arduous level. That just ensures that that folks have the conditioning that they can go through a really long hard day of very physically demanding work in challenging conditions.”

The agency has a prescribed fire policy book that outlines the training process. In the last 10 years, the training procedures have become more formalized. “In 2012, we formed a committee to look at qualifications from other agencies and organizations such as the U.S. Forest Service, other state agencies, and The Nature Conservancy. We put together a plan for the skill sets and the training that we needed in order to get our staff to where they needed to be,” said Dye. DWR prescribed fire staff train through modules created by the National Wildfire Coordinating Group, a national organization dedicated to enabling and training wildland fire teams.

“That training is really the cornerstone of our safety procedures,” said Dye. Prescribed fire crew wear specialized clothing and equipment, are trained to deal with a variety of situations, and attend thorough pre- and post-burn briefings. 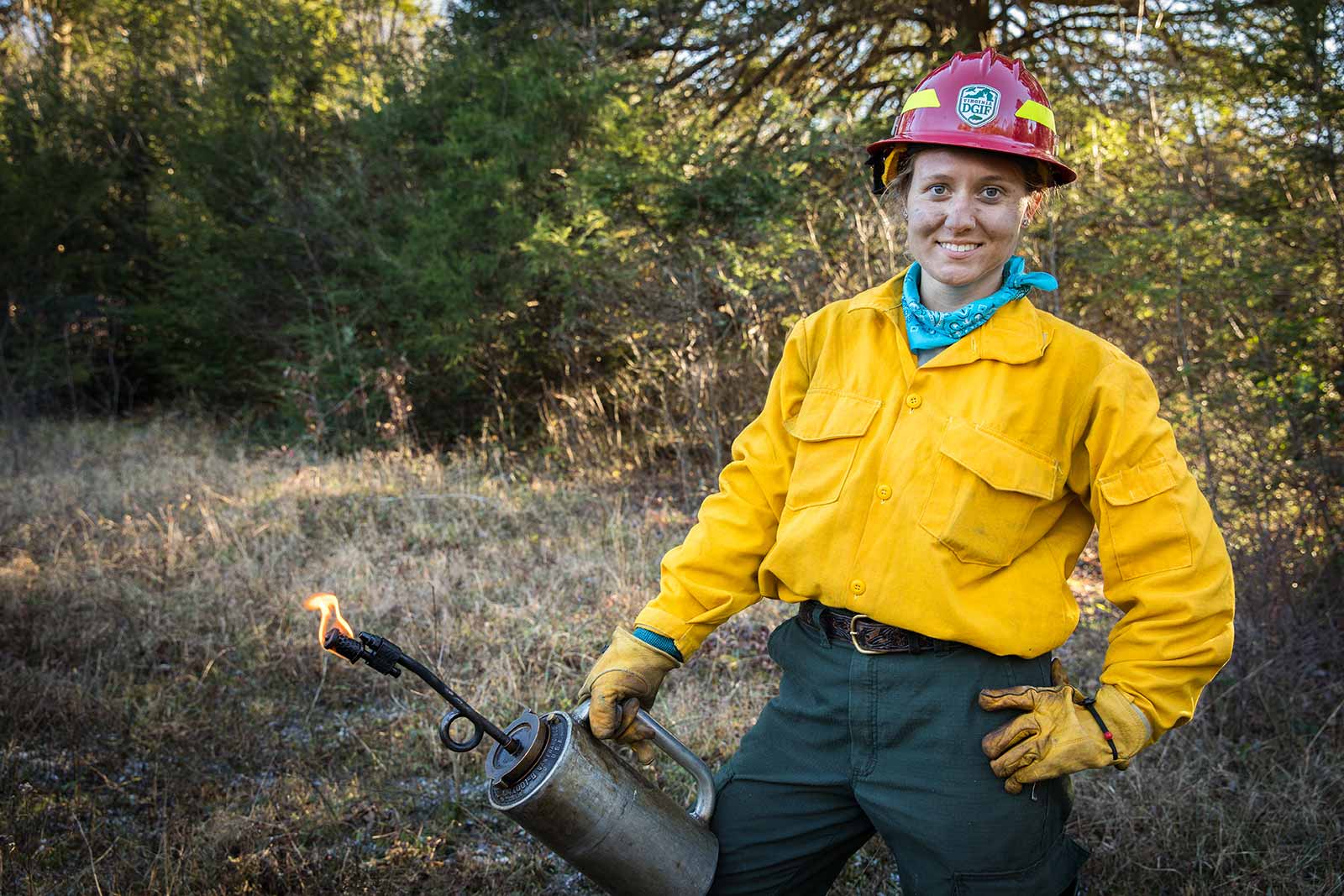 “The briefing beforehand is used to explain any type of danger situations and anything that may come up in the fire that may be unexpected,” Dye said. Then a briefing at the end of the day covers what happened during that day’s burn. We go over what we intended to do, whether we actually achieved our objectives, and discuss what might have gone differently than expected. We ask everyone if there was ever a time that they felt unsafe or if there was a time where you felt something could have been done differently. They’re a learning tool we use every time we burn.”

Each prescribed fire has an assigned Burn Boss, who develops the prescribed burn plan and leads the entire work crew during the burn. The burn boss is responsible for all aspects of the burn. Larger burns will also include line bosses for responding to critical situations and monitoring crew and a weather/smoke monitor who communicates with the burn boss about smoke behavior and changes in fire weather.

Working together on #GoodFire crews helps agency staff who might not otherwise collaborate get to know each other and build camaraderie. Samantha Lopez, a DWR Wildlife Management Area supervisor, burns with the DWR fire crew. “With burning, you’re always learning,” she said. “You’re never going to be bored.” 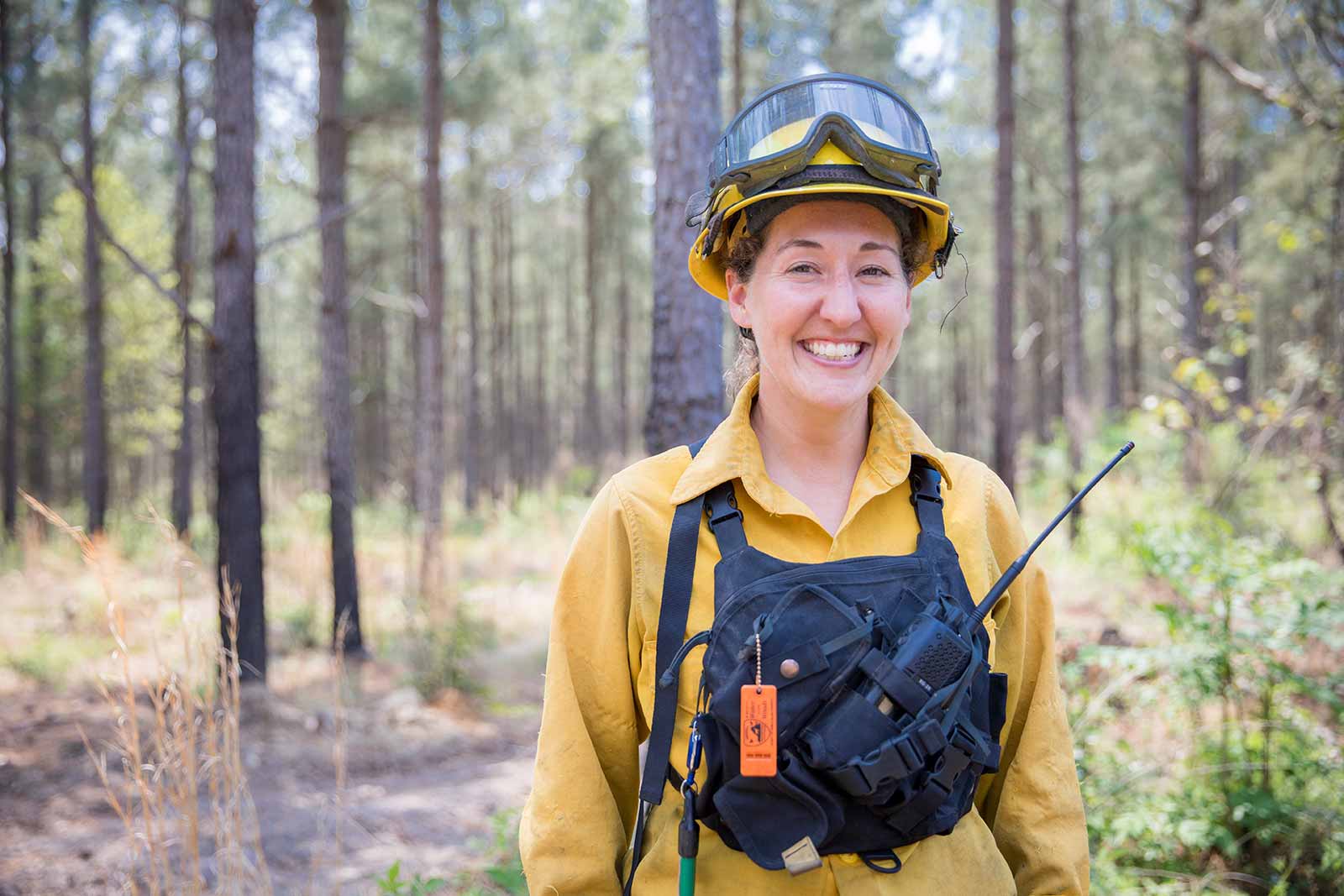 Lopez notes that site preparation for a burn is a great time for getting to know her coworkers. “We’ll go out and spend two or three days dropping trees that are hazardous or dangerous or spending a lot of time digging fire containment line together,” Lopez said. “You end up learning more about these people than you ever thought you would. I learned one of the other firefighters is teaching himself Japanese so that he can be a translator. You learn all these really cool things about your coworkers and what makes them tick that you never would have realized before.”

Lopez is one of just a few women within DWR who work on the prescribed fire crew, but there are a number of females in fire crews across other agencies as well. She notes that on the fire line, there’s no distinction between genders as long as you can do the work needed. “It’s really hard to find fire boots to fit because we’re not wearing men’s sizes,” she said. “So little things like that come up, but if you’re on a crew, you’ve earned that position, and people don’t really say anything about it on the fire itself.” 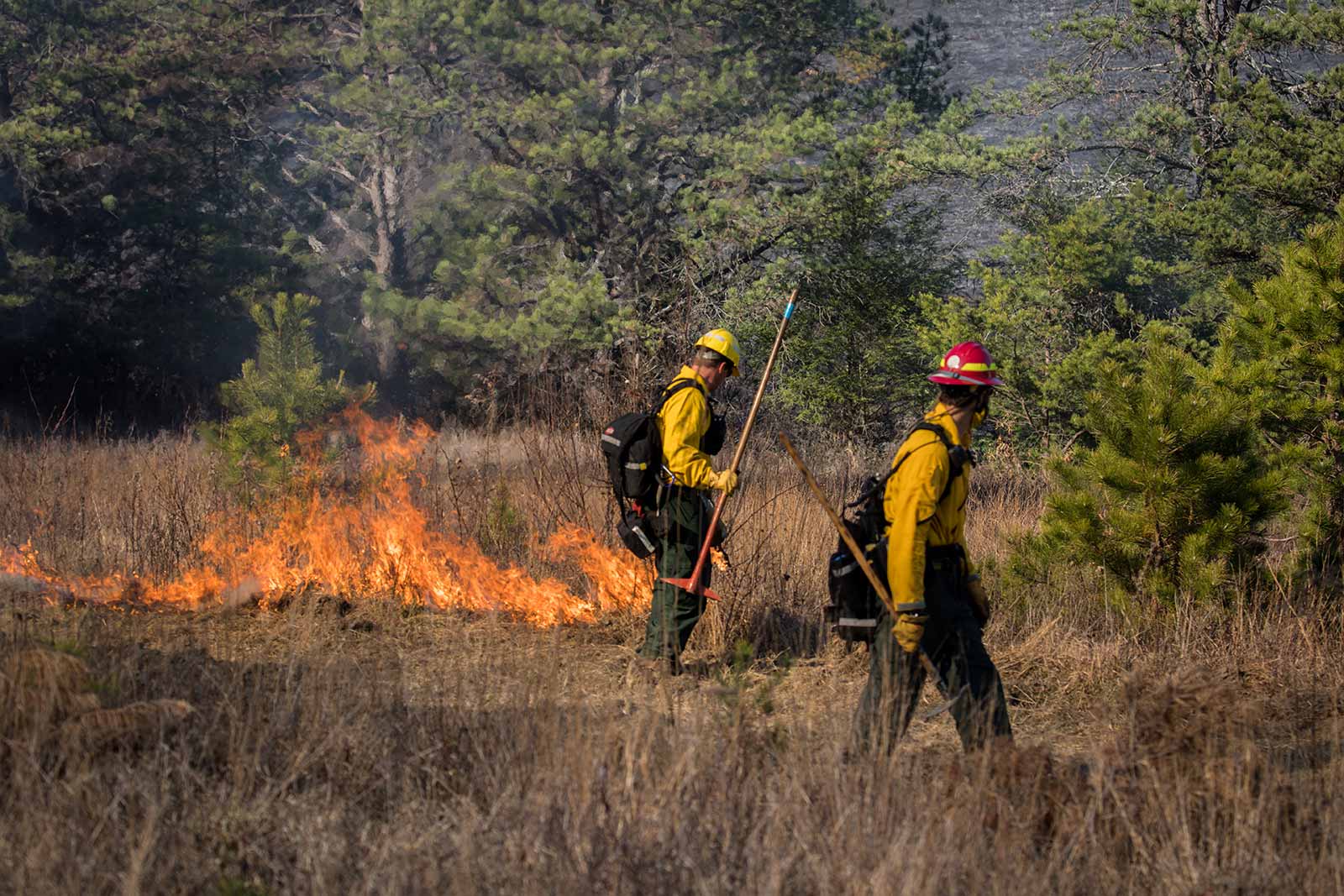 We’ve been conditioned to think of fire as solely a destructive force, but for wildlife, forests, and meadows, fire can also be restorative and a force for good. Prescribed fire is #GoodFire.