Habitat: The big brown bat is found across the entire state and is one of the most common bats in the United States. It often hibernates in manmade structures including old buildings and churches but will use caves and rock shelters. It is a solitary hibernator but can occasionally be found in small clusters. During the summer, this bat is often found in barns, sheds, and old buildings. Females form maternity colonies under loose bark or in manmade structures. Occasionally, males may roost near the females but they typically are solitary.

Diet: They often emerge before dusk to feed and most foraging occurs within 1.2 miles of the roost site. Big brown bats can eat up to ⅓ their body weight in insects every night, frequently feeding on agricultural pests.

Distribution: The big brown bat inhabits a wide variety of habitats and is locally abundant. 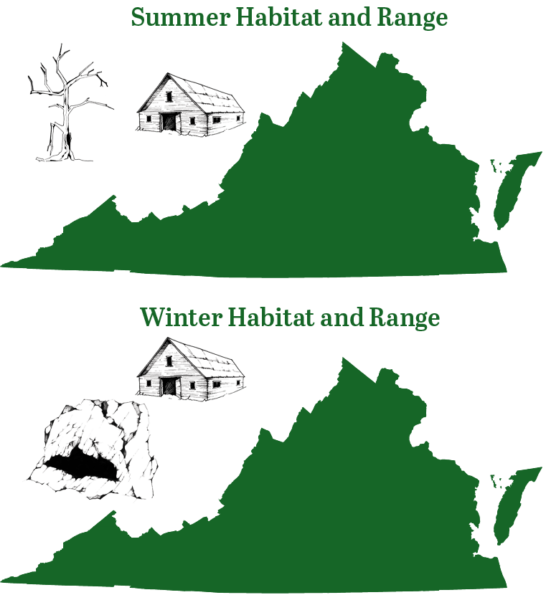 The big brown bat is one of the largest bats in the state, measuring 4.0–5.1 inches in length and weighing between 0.5–0.75 ounces. Their large size and uniformly brown fur color make them one of Virginia’s easiest bats to identify. The big brown bat has a large head, short rounded ears, and a naked muzzle.

Maternity colonies are often found in old structures like church steeples, old houses, and barns and may consist of several hundred individuals including both males and females. The females will congregate in the higher, warmer areas while the males remain isolated individually in the lower regions of the structure.