Habitat: In the south, this species is found roosting in buildings, bridges, schools, and other man-made structures, but in the west it is associated with caves where it forms huge colonies.

Distribution: This is a bat of the extreme south and western states with the range extending into Central and South America. Until recently, there were two records for this species in Virginia. Two individuals were netted at a site in the mountains of Virginia west of Blacksburg. A single individual was identified from a specimen submitted to the Health Department from southeast Virginia. In July 2014, a pup was rescued from an apartment complex in Charlottesville and sent to a wildlife rehabilitator. The presence of a maternity colony this far north suggests the species may be expanding its range. 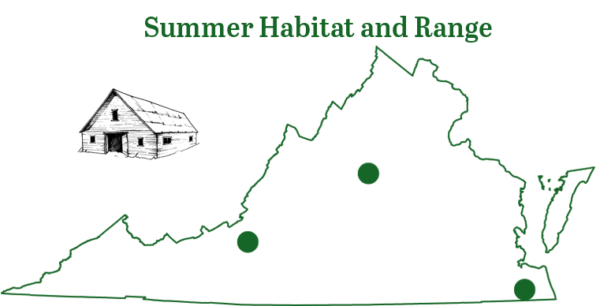 The Brazilian free-tailed bat, also known as the Mexican free-tailed bat, is easily distinguished by its tail that extends for about half its length beyond the tail membrane. Adults measure 3.5–4.0 inches in length and weigh 0.4–0.5 ounces. The fur is short, velvety, and colored a brownish gray or dark brown. Some individuals have patches of white scattered throughout their fur. The ears are short, wide, thick, leathery, and separated in the middle of the forehead by a narrow gap. The wings are long and narrow, and the hairs on the toes extend beyond the claws. This species has a distinct musk odor that can reveal their roost site.

A single young is usually born in late May to early June, but rarely twins are born. The gestation period is 77–84 days, and young start to fly at about five weeks of age.