Distribution: Range is limited to north facing slopes on Shenandoah and Great North mountains in Virginia and West Virginia at elevations above 3,000 feet in mature hardwood forests. 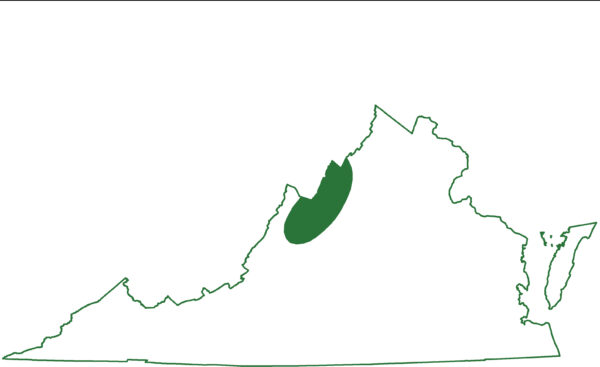 The body is uniformly dark brown with irregular shaped white to cream spots, which are more abundant on the sides. Belly is pale gray, except for the throat, which is usually pink. Similar in appearance to the White-spotted Slimy Salamander, but more slender in appearance and more prominent eyes.

Many plethodonid salamanders will aggressively defend their territories from adults of the same sex.

Movement is limited to less than 6 feet, except during the mating season which occurs in late August to early September. Not much else is known about their reproductive ecology, but it is most likely similar to other woodland salamanders.

Tier I Species of Greatest Conservation Need in Virginia’s Wildlife Action Plan. A 1994 Conservation Agreement between the U.S. Forest Service and the U.S. Fish and Wildlife Service protects this species and its habitat.