Life Span: up to 30–35 years in the wild and possibly over 50 years in captivity

Habitat: Eastern Hellbenders are an aquatic species that prefer clear, fast-flowing, well-oxygenated streams and rivers in southwest Virginia. The stream bottom should be comprised of gravel and sand with an abundance of large flat rocks. In Virginia, hellbenders have been observed in streams as small as 5 meters wide and rivers over 200 meters wide.

Diet: Adult hellbenders feed primarily on crayfish and occasionally small bottom dwelling fish. As juveniles, they are known to eat a variety of aquatic invertebrates. Consumption of trout is often grossly over exaggerated by anglers as their overall impacts to trout populations are negligible.

Distribution: Eastern Hellbenders range through much of the Appalachian Mountains, from southern New York to Northern Georgia. In Virginia, they are only found in the southwest corner of the state. 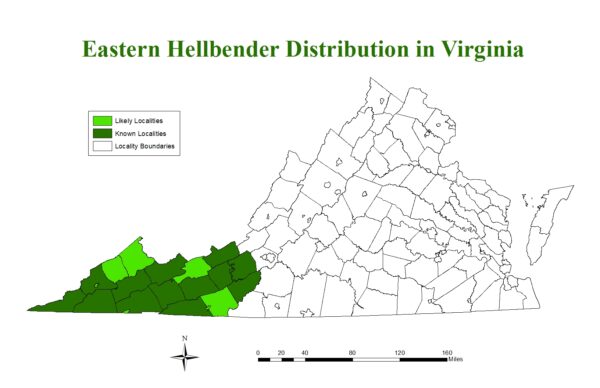 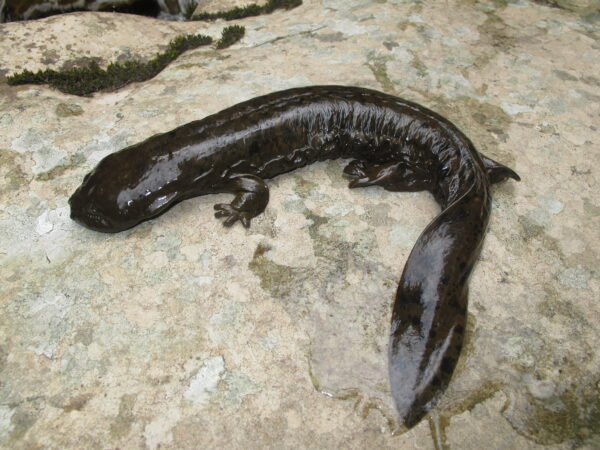 Eastern Hellbenders are large, stout-bodied, fully aquatic salamanders. They are the largest salamanders in North America; adults measure nearly 30 inches long and weigh up to 4 lbs. Their heads are large and flattened with small, widely separated eyes. They are typically brown, but can range from gray, to yellowish brown to almost black. Their backs have markings that may be either darker or lighter than their skin color. Their bellies are lighter and occasionally may also be sparsely spotted. Fleshy skin folds run down both sides of their bodies and their tails have a fleshy flap of skin above and below.

Juveniles have external gills, which they lose upon growing between 4–5 inches long (at approximately 18 months of age). 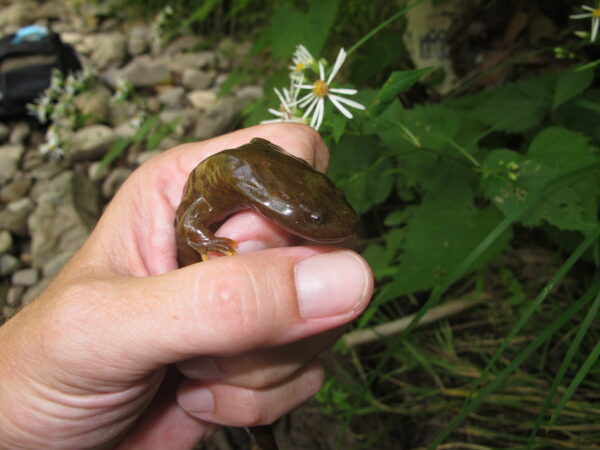 Hellbenders are often confused with mudpuppies, which are also large aquatic salamanders. However, unlike hellbenders, mudpuppies retain their external, feathery gills throughout their lifespan. 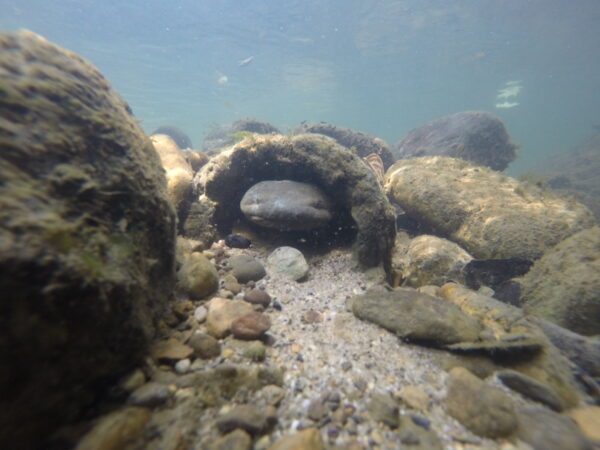 Early in their breeding season, male hellbenders stake out and guard large, flat rocks in stream and river bottoms. They excavate under these large rocks to build their nest. A female will then enter the nest and lay her eggs in a single long strand, which looks similar to a string of pearls (an average clutch size is about 300 eggs, but can vary from 200 – 1400 eggs). The male will then fertilize the eggs and force the female out of the nest. He will guard the eggs and young until the following spring. Hatching occurs about 4 – 8 weeks after fertilization, depending on water temperature. 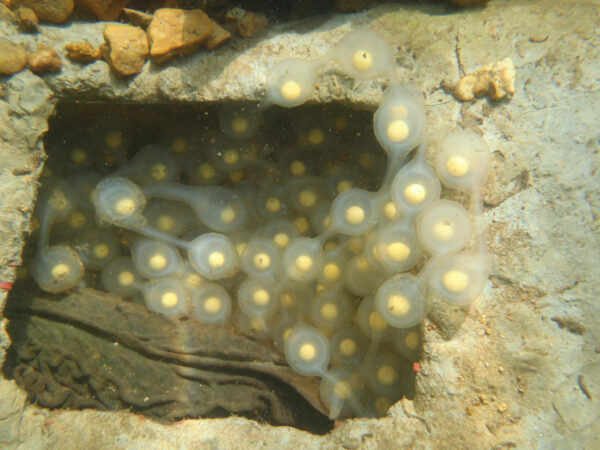 Eastern Hellbender eggs inside an artificial nest box. An adult can be seen in the bottom left corner. Photo by Jeff Briggler. 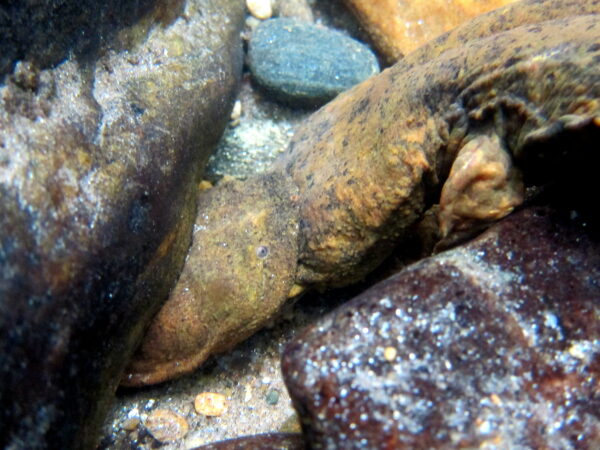 A male Eastern Hellbender acting as “den master” by biting the head of another male encroaching on his nest. Photo by Lori Williams.

A Creature of Many Names 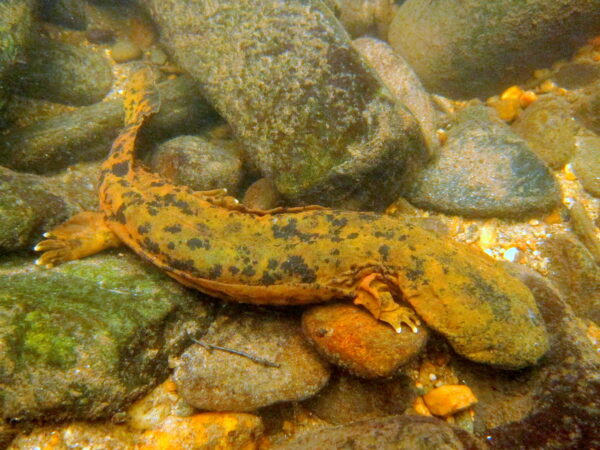 Early settlers thought that these strange looking animals looked like creatures from Hell that were “hell bent” on returning and thus, the common name Hellbender. However, the Eastern Hellbender has earned many creative nicknames over the years, including Allegany alligator, snot-otter, water dog, lasagna sides, devil dog, mud devil, mud cat, and walking catfish.

Because of hellbenders’ preference for clean streams and rivers, their presence serves as an excellent indicator of good water quality.

Larva and juveniles are potential prey for snapping turtles, watersnakes, and large predatory fish. Adults have been known to be preyed upon by mink and otters.

Although anglers have reported seeing hellbenders attracted to their creel at the end of their stringer, there is no evidence that hellbenders negatively affect trout populations where they occur.

In Virginia, hellbenders can only be found in the streams and rivers of southwest Virginia. However, we do not recommend actively searching for them. Activities such as flipping rocks can destroy valuable nesting habitat for a variety of aquatic species, including hellbenders. In addition, it is illegal to possess a hellbender in Virginia. 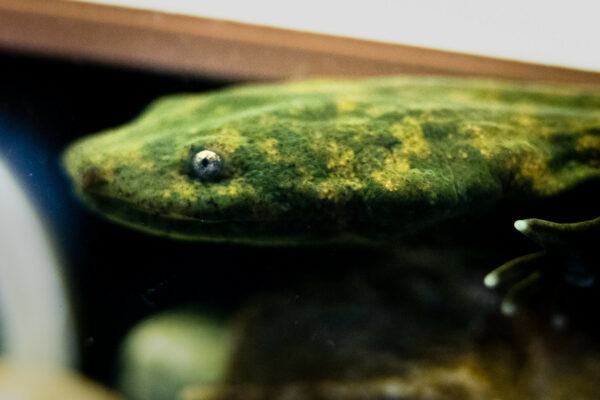 Hellbender populations have been declining since the 1970s. In most states within their range, hellbenders are listed as rare, threatened, or endangered. Since 2011, the Ozark Hellbender subspecies, C. a. bishopi, has been protected as a federally Endangered species with its population having declined to 600 individuals. The Missouri population of the Eastern Hellbender was listed as federally Endangered in 2019, while the eastern populations were found not warranted for listing. However, reports have shown Eastern Hellbenders have significantly declined or completely disappeared from many streams that they historically occupied. Although some Eastern Hellbender populations appear to be doing well, declines are indeed occurring in many locations throughout their range. 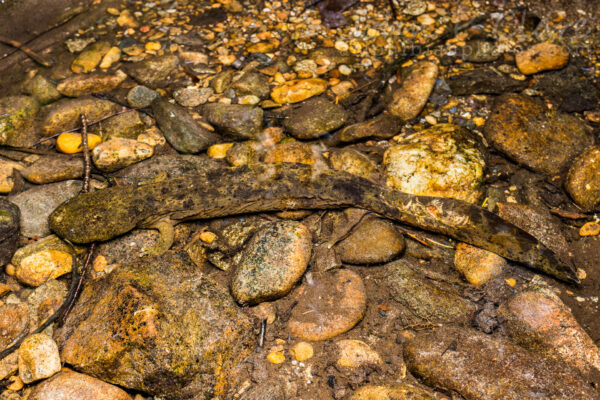 The declines of Eastern Hellbenders can largely be attributed to the degradation of stream quality, which is caused by the damming of rivers, water pollution, and siltation of streams. Dams eliminate free-flowing sections of rivers and produce low oxygen conditions on the river bottom. Toxic chemicals, such as untreated sewage and chemical runoff from lawns, fields, and parking lots pollute rivers and streams, impacting water quality and the health of hellbenders. Like other amphibians, hellbenders “breathe” through their permeable skin, so any toxic substance in the water can enter their bodies and cause them harm. Siltation is the buildup of sediment on the bottom of a stream. Excess sediment enters streams from various human disturbances to the soil, such as the removal of streamside vegetation, logging, poor forestry practices, and erosion from farms and housing developments. Siltation affects hellbender survival by burying the large rocks that hellbenders depend on for reproduction, suffocating their eggs, filling in hiding places of their young, and killing the crayfish and other invertebrates that they feed on.

Other threats to hellbenders include: collection pressure from the pet trade and people killing them. Anglers using live bait such as crayfish and worms may sometimes catch a hellbender. They will often cut the line or kill the hellbender. Another reason people may kill them is the unfortunate misbelief that they are poisonous, when they are in fact harmless.

Fortunately, several efforts are underway in Virginia to address these many threats in order to conserve and manage hellbender populations.

The Virginia DWR has taken the lead in Virginia on Eastern Hellbender conservation through multiple research studies, deployment of nest boxes, stream habitat restoration, and outreach and education.
Research

From 2012–2016, DWR partially funded a partnership between the agency’s biologists and Virginia Tech researchers to assess hellbender populations in selected rivers in southwest Virginia that traversed a variety of habitats, including forests and agricultural landscapes. In this study, field researchers measure, weigh, and implant the captured hellbenders with a Passive Integrated Transponder (PIT) tag, which provides an identifying number unique to each specimen. Individuals that are recaptured are scanned to determine the presence of the PIT tag and reassessed.

In 2014 and 2015, DWR partially funded another partnership; this time to collect Environmental DNA analysis (eDNA). In this project, DWR biologists worked with Smithsonian National Zoological Park researchers and citizen scientists from the Virginia Master Naturalist Program (New River Chapter), and/or biology students from the University of Virginia-Wise and Southwest Virginia Community College. 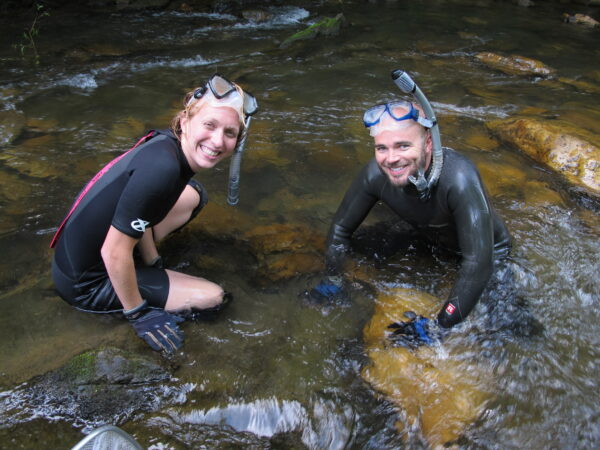 This eDNA data is a relatively new approach to determining the presence/absence of aquatic vertebrates in targeted locations. Environmental DNA also is being investigated as a method for monitoring aquatic disease. In Georgia and Tennessee, eDNA analysis identified previously unknown hellbender populations that were later confirmed by conventional stream survey. The objectives of the DWR eDNA collection were to 1) create a more comprehensive map of hellbender distribution in the state, 2) generate coarse estimates of abundance, 3) establish an eDNA sample archive as a long-term resource for wildlife management, and 4) engage private citizens in freshwater science and education.

In 2019, the Virginia DWR completed the testing of artificial shelters (nest boxes) and demonstrated their potential utility for hellbender research, monitoring, and conservation. From 2016–2020, partially funded by DWR through a State Wildlife Grant, Virginia Tech researchers will deploy about 500 nest boxes at 12 different sites across 5 different streams. By refining this technique to be used effectively on a broad scale, nest boxes could help prevent population declines, promote population growth, and curtail listing of the species in Virginia. 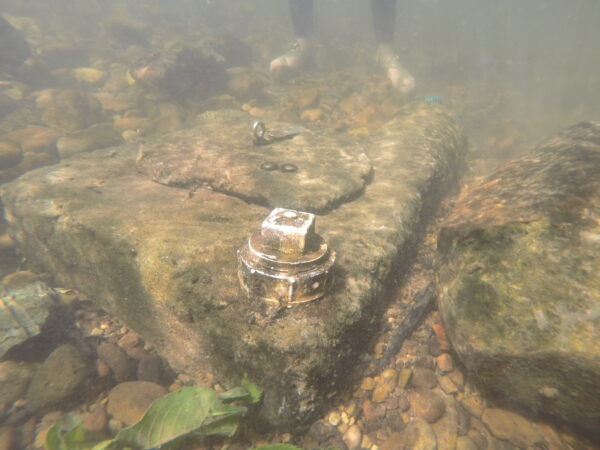 A hellbender nest box resting in the bottom of the stream. The lid on top is used for monitoring. Photo by J.D. Kleopfer/DWR.

Equally important, these nest boxes can help identify the proximate factors that determine the fate of hellbender nests, arguably one of the most important unanswered questions about hellbender conservation.

A common characteristic of population declines across the species’ range is a strong demographic shift towards large, old individuals with few representatives in younger size/age classes. This shift suggests that reproductive failure and/or a lack of juveniles successfully joining the population may contribute to hellbender population declines. However, hellbender reproductive and juvenile ecology remain poorly understood, so filling in this knowledge gap with data obtained from nest boxes is critical for management of this species in Virginia and across its remaining range.

The Virginia DWR has completed and continues to work on numerous stream restoration projects that have improved water quality and benefited Eastern Hellbenders and numerous other aquatic species. These projects have included:

In order to educate the public on the plight of hellbenders, the Virginia DWR produced an educational poster, this species profile, and a hellbender mascot, “Wally the Waterdog,” who hands out educational literature about Eastern Hellbenders at events.

Watch: Hellbender Research in Virginia (2015). This research partnership with Virginia Tech was partially funded by DWR through a State Wildlife Grant. 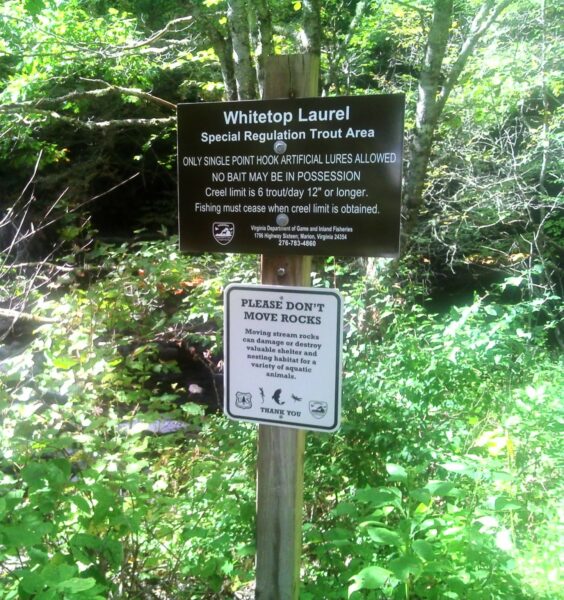