Habitat: The red bat roosts in trees during both summer and winter. In the summer, females raise their young in dense foliage in the branches of trees. During winter, they hibernate in tree cavities or under logs or rocks. It is not uncommon for logging operators to find red bats under log piles during the winter.

Diet: Red bats can be found feeding around lights in urban, suburban, or country settings. Moths and beetles comprise a large portion of their diet along with June bugs, planthoppers, ants, and leafhoppers.

Distribution: The eastern red bat is found throughout Virginia and typically migrate in the fall from their northern summer range to winter in the south. 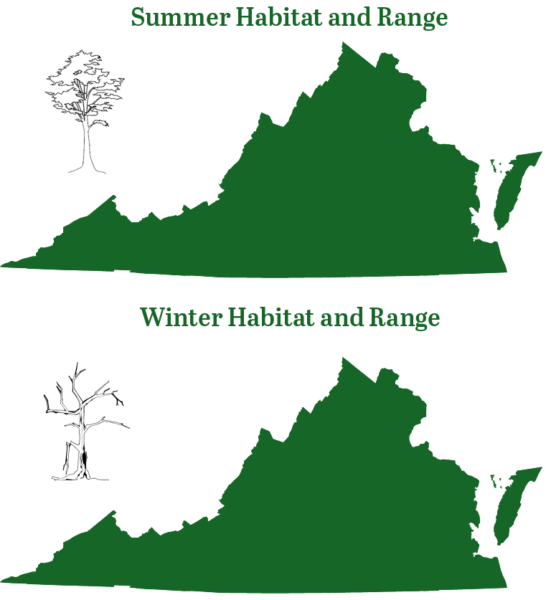 The eastern red bat (“red bat”) is Virginia’s most common tree bat. Adults measure approximately 3.75–4.5 inches in length and weigh 0.2–0.5 ounces. The red bat is easily distinguished from all other bats in Virginia by its unique red color and furred tail. This is the only species in Virginia that is “sexually dimorphic” (you can distinguish males from females by fur color). Males are a bright “Irish setter red” while females have a frosting of white that gives them a duller look. Their ears are short and rounded and the tragus is triangular in shape. Both males and females have a white patch of fur on their shoulders and wrists.

Reproduction occurs in late summer before the bats start their migration. Copulation occurs during flight, and delayed fertilization occurs in the spring. While most bats have one or at most two young, the red bat can produce up to four young, and there is a record of one female having five young. Indeed, bats of this genus (Lasiurus) possess four functional mammae, unlike other bats which possess only two. Like other temperate bats, a single litter is produced in late spring or early summer.