Diet: Little is known of the feeding habits of this species. In the few studies conducted, beetles, moths, and leafhoppers were the primary prey items.

Distribution: The evening bat is largely a bat of the southeastern U.S., occurring sparsely in the upper midwest. In Virginia, the evening bat is known from the Piedmont and Coastal Plain but not from the mountains except for two records. A maternity colony was discovered on the Virginia Polytechnic Institute campus during renovations to a building, and an individual was captured during a survey in Tazewell County. The evening bat is a tree bat that has adapted well to human structures. In forested settings, evening bats use cavities and sloughing bark as roost and maternity sites. 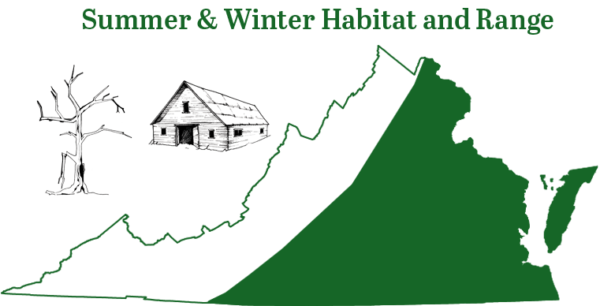 The evening bat is a tree bat with the appearance of a “scaled-down” version of the big brown bat. Adults measure approximately 3–3.8 inches in length and weigh 0.25–0.5 ounces. The smaller size distinguishes this bat from the big brown bat, and its short ears and blunt curved tragus separate this bat from the Myotis bats. The hair is short and dull, dark brown above and lighter below. Unlike other tree bats, the fur does not extend onto the wing or tail membranes. Evening bats have an acrid odor that distinguishes them from other Virginia bats.

Like other tree bats, the evening bat typically produces two young. Parturition normally occurs in early summer and the females nurse their young for at least two weeks.

Females mark their young by rubbing a scent from their submandibular gland (region below the lower jaw) on the face of the young. The scent is unique enough that each female can recognize her own young by smelling their face. Even so, after the first two weeks of nursing, females will typically nurse any young that approach them. The young can fly at about three weeks of age.

The evening bat inhabits a wide variety of habitats and is locally abundant.