Habitat: The gray bat and the Virginia big-eared bat are Virginia’s true cave bats as they use caves year round for both hibernacula and summer roosts. Females typically raise their young in a cave that often has a small stream running through it. Males will set up bachelor colonies with home ranges that encompass many caves.

Diet: Gray bats most frequently feed over large bodies of water such as lakes and rivers. They prey on moths, beetles, flies, mosquitoes, and mayflies along with many other species of insects.

Distribution: Gray bats are predominately found in the summer months in Virginia, with the majority migrating out of state to hibernate in Tennessee. 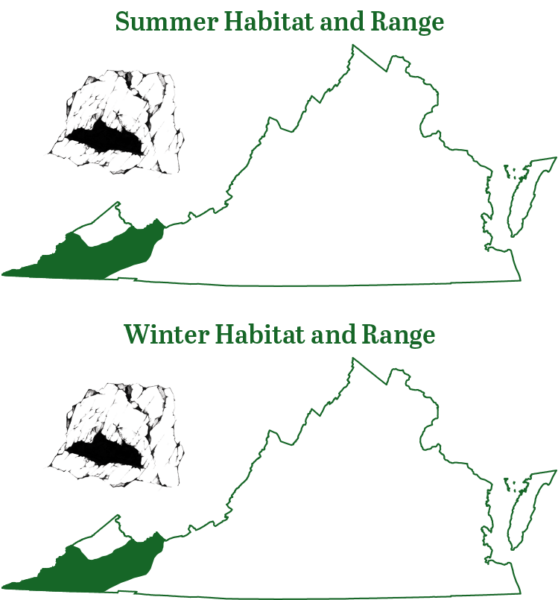 The gray bat is found in the Tennessee Valley drainage in southwest Virginia. They weigh 0.3–0.38 ounces and measure 3.2–3.8 inches in length. Gray bats are easily distinguished from other members of the genus Myotis by the uniformly colored hairs on their backs. Gray bats possess one feature that no other Myotis in the United States has: the wing membrane is attached to the ankle as opposed to the side of the foot or the base of the toes.

Reproduction takes place in the fall during the swarming period around the hibernacula. A single young is born in late May or early June, and they become volant in approximately three weeks. Mothers leave their young hanging in the caves as they forage and are capable of distinguishing their young from the others when they return.

Primary threat will be white-nose syndrome if gray bats are affected by the disease. Protection of winter and summer roosts are conservation priorities.