Habitat: The hoary bat is a tree bat that utilizes tree roosts during both summer and winter. It can be found in coniferous forests, often near cleared areas. The hoary bat typically migrates from its northern range in the fall and winters in extreme southeastern and southwestern areas of North America south through Mexico and Guatemala.

Diet: Moths make up the main portion of this bat’s diet. Other foods include stinkbugs, wasps, leaf and June bugs, dragonflies, grasshoppers, and flies. Because of its size, the hoary bat has been known to attack smaller bats like the tri-colored bat.

Distribution: The hoary bat has the largest distribution of all North American bats, but is considered uncommon throughout its range. Until recently, records for the hoary bat in Virginia were only from the spring and fall migration period. Recent captures confirm the species is breeding in Virginia. 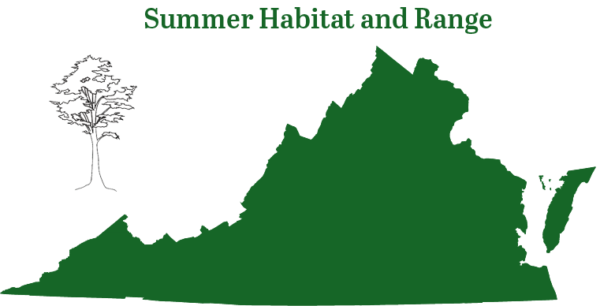 The hoary bat is the largest bat found in the Commonwealth. Adults measure approximately 5.1–5.9 inches in length and weigh 0.75–1.5 ounces. Both size and coloration easily distinguish the hoary bat. The hair is banded black at the base, then tan, dark brown, and tipped with white. This combination gives the bat its hoary appearance. Patches of white are present on the shoulders and wrists, and the throat and the wing linings are buffy. The ears are short and rounded with a naked black edge. The tail membrane is fully furred.

Mating probably starts in late August with the onset of migration and continues onto the wintering grounds. Like the red bat, the hoary bat typically has two young but may produce as many as four. Parturition is usually in early summer and the young are typically left hanging on a twig or leaf while the mother forages. Young can fly at about five weeks of age.