Habitat: During the winter, Indiana bats gather in caves and mines and often form large colonies, some as large as 100,000 individuals. These large, tight clusters have earned them the nickname “Social Myotis.” They require colder temperatures than most other bats and only use a very few preferred sites.

Diet: They show a preference toward feeding on moths, beetles, and flies, but also will readily consume many other types of insects.

Distribution: Ninety-five percent of the known population of these bats hibernate in only 15 caves. In Virginia, the Indiana bat is found in low numbers in twelve different caves. The Commonwealth’s Indiana bat population has been declining since they were first surveyed in the 1970s. 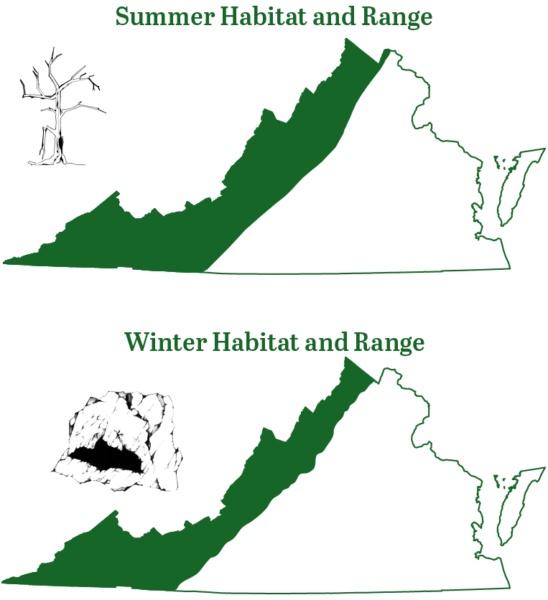 The Indiana bat is difficult to identify and can be easily confused with the little brown bat. Indiana bats weigh 0.2–0.45 ounces and measure 3–3.8 inches in length. They have a more fluffy appearance than little browns, and their fur coloration tends to present less contrast, blending from dark brown on the back to slate gray on the underside. Indiana bats also have small feet (0.35 inches) with short toe hairs, and a keeled calcar; while little browns have larger feet with hair that extends past the toes, and their calcar lacks a prominent keel.

Indiana bats feed along forested stream corridors and in upland and bottomland forests.

Mating takes place predominantly during the fall swarming. They exhibit delayed fertilization, and the young begin to develop after the females wake up from hibernation. During summer, Indiana bats break into small maternity and bachelor colonies, roosting under exfoliating bark of trees. One pup is born each year in late June or early July.