Habitat: It commonly hibernates in the many caves located in the western part of the state. During the warmer months females form maternity colonies while most adult males remain relatively solitary during this time of year. The little brown bat is common in most habitat types from city to suburban to forested areas.

Diet: Midges are a staple of their diet, but tiny flies, moths, mosquitoes, and beetles are also readily consumed.

Distribution: The little brown bat can be found throughout Virginia except for a few portions of southeast Virginia. 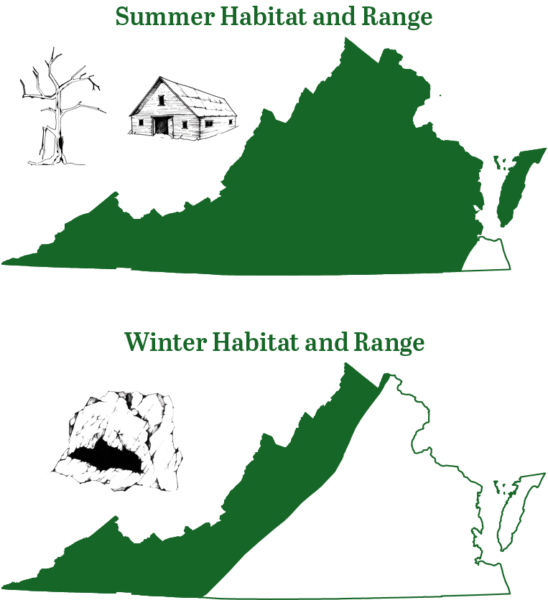 The little brown bat was one of the most common bats found in Virginia before the outbreak of white-nose syndrome. Adults measure approximately 3.2–3.8 inches in length and weigh 0.2–0.45 ounces. The little brown bat is similar in size to many other bats in the region, having a wingspan of 8.7–10.7 inches. It is distinguishable from other Myotis by its large feet with heavily furred toes. The back fur is dark brown with much lighter coloration ranging from gray to white on the underside.

After giving birth, lactating females seem to have a preference for larger prey items such as beetles. Little brown bats can be observed feeding over water, flying regular patterns through swarms of insects. Mating takes place during the fall, and a single pup is born in the spring. Maternity colonies are frequently found in manmade structures such as old buildings, churches, and bridges and may consist of several thousand individuals.