Habitat: The northern-long eared bat hibernates in caves during the winter but has been found in artificial habitats such as mines and dams. These bats show a preference for tight slots and small out-of-the-way places in which to hibernate, but they may also be found in the open. They are most frequently observed hanging individually or in small groups of two or three bats crammed into a small crevice. In addition, they can be found hibernating in mixed clusters with other species such as little brown and Indiana bats.

Diet: The northern long-eared bat is unique in its feeding habit, as it snatches food from leaves, twigs, and the ground. This form of feeding is referred to as gleaning, and food items include moths, flies, beetles, caddisflies, and spiders.

Distribution: The northern long-eared bat can be found in most regions of the state. 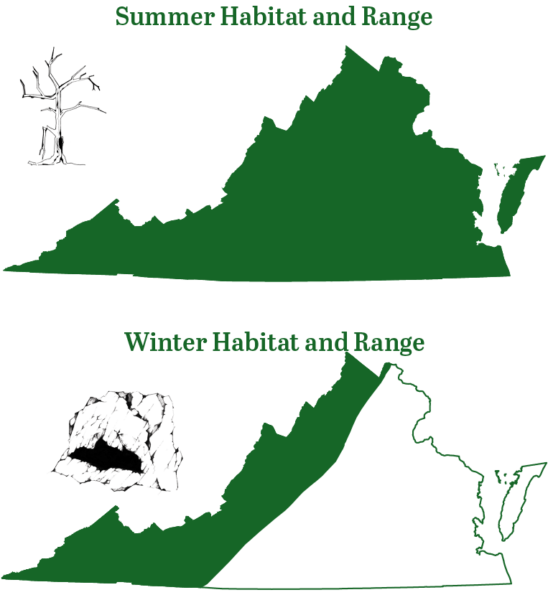 The northern long-eared bat is very similar in appearance to the little brown bat and several other Virginia Myotis species. The northern long-eared bat measures 3–3.5 inches in length and weighs 0.17–0.35 ounces. This species can be distinguished from other Myotis species by its dagger-shaped tragus and long ears. The ears of this bat are 0.5–0.7 inches in length and, when laid flat along the muzzle, they extend past the nose by about 0.2 inches.

Little is known about reproduction in this species. Mating apparently takes place in the fall, and delayed fertilization presumably results in the birth of one pup in the spring. Small maternity colonies are formed consisting of fewer than 100 females. Maternity sites have been found under exfoliating bark of trees, in barns and other buildings, and even under bridges. Males and females swarm near and in the entrances of caves in August and September.