Diet: The silver-haired bat is a slow yet highly maneuverable flyer and is considered an opportunistic feeder. Of the few studies conducted, moths, hoppers, long-horned bugs, beetles, and flies have been identified as prey.

Distribution: The silver-haired bat is found throughout most of North America and just into northern Mexico. In Virginia, most records for the silver-haired bat are from spring and fall migration, but there are several records of adult males during the summer months. Females spend the summer in the northern United States and Canada where they raise their young. 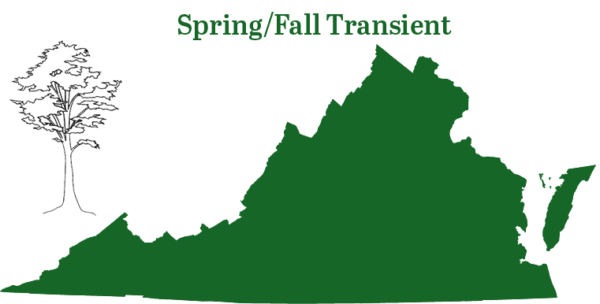 With dark brown to black hairs tipped in silver or white, no other bat in Virginia looks like the silver-haired. The fur extends about halfway onto the tail membrane but is not found on the shoulders or wings. Adults measure approximately 3.6–4.0 inches in length and weigh 0.3–0.4 ounces. The ears are short and rounded with the tragus being broad and blunt.

Mating probably starts in late August with the onset of migration and continues onto the wintering grounds. Like the other tree bats, the silver-haired bat typically has two young. Gestation is about 50 to 60 days, and young are born in late June or early July and fly at about one month of age.