Habitat: It is more tolerant of warmer hibernacula temperatures than other species and even shows a preference for warmer areas of caves. It is a solitary hibernator and is widely distributed among the Commonwealth’s caves. When not hibernating, these bats lead a relatively solitary lifestyle, but they are sometimes found in small colonies in hollow trees.

Diet: The tri-colored bat is one of the first bats to emerge in the early evening and can be observed feeding at treetop level. It feeds on small flies, beetles, true bugs, and flying ants.

Distribution: The tri-colored bat is found throughout the state in the warmer months, but hibernates in caves and rock shelters in the mountains during winter. 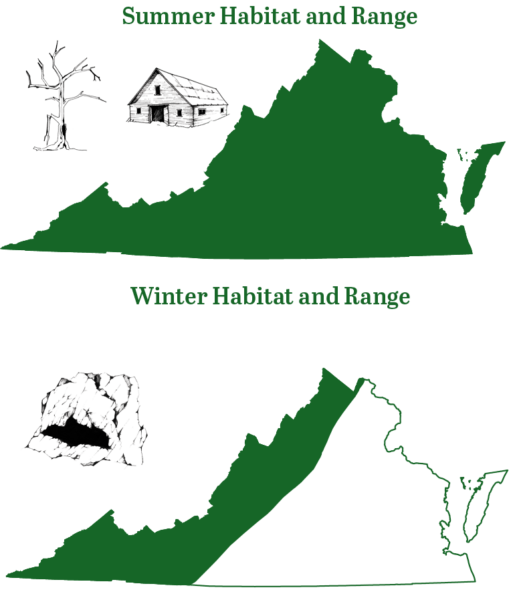 The tri-colored bat is one of the smallest bats found in the state, weighing between 0.1–0.3 ounces and measuring 2.8–3.5 inches in length. The tri-colored bat is quite distinctive with several characteristics that make it easy to identify. Befitting the species name, this bat’s fur is tricolored: dark at the base, whitish in the center, and reddish brown at the tip. The forearm has a pink or reddish coloration that is easy to see when the bat is roosting. During hibernation, this bat often has considerable amounts of condensation on its body.

Females form small maternity colonies in the spring, and twins are frequently born each year. Pups develop quickly: they begin to fly in about three weeks and are left by their mothers about one week later.

It has a slow, fluttering flight that closely resembles that of a moth.