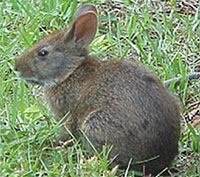 The marsh rabbit looks quite different than the cottontails. It is about the same size as an eastern cottontail, but appears smaller because it has less hair. The legs and ears of the marsh rabbit are shorter. Its tail and head are also smaller. Its toenails are considerably longer than those of cottontails. It is darker in color and is the only member of Sylvilagus in which the underside of the tail is not white.

The marsh rabbit is restricted to the Coastal Plain of the southeastern U.S. In Virginia, they are found in several counties in the extreme southeastern portion of the state. They are most abundant in the Dismal Swamp.

The two main predators of the marsh rabbit are the great-horned owl and the marsh hawk. Other predators include bobcats, foxes, mink, and alligators (not in Virginia). Rattlesnakes and water moccasins prey on young. They are likely susceptible to the same diseases as cottontails. Because they occupy aquatic habitats, marsh rabbits are not typically susceptible to overharvest.

Reproduction is similar to that of the eastern cottontail. However, the gestation period is a bit longer at 30-37 days. Also, marsh rabbits have been reported to breed year-round in other states. Little is known about the timing of their breeding activity in Virginia. 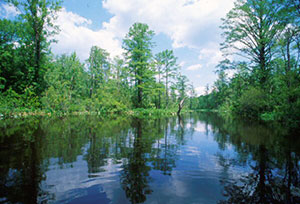 As the name implies, the marsh rabbit is found only in undisturbed marsh. They will inhabit salt and brackish marsh but prefer freshwater. Unlike other rabbits, their distribution is determined by the availability of water. Interestingly, the marsh rabbit is an excellent swimmer and often dives into water as a means of escape.

Little is known about the population status of marsh rabbits in Virginia, but they are likely stable where undisturbed marsh exists. The greatest threat to their continued existence in Virginia is loss of their vulnerable habitat.

Management for this species includes protecting its habitat and establishing new habitat through wetland restoration.