While Virginia’s turkey population remains robust, fall harvests will fluctuate due to a number of other factors beyond the population size. These factors, which vary across the state, include the length and timing of the fall season, annual variation in reproductive success, acorn abundance, hunting pressure, and weather.

Reproductive success can vary widely; inclement weather in May and June can lead to nest losses or death of the young turkey poults. In 2021, the productivity estimate (2.7 poults/hen) landed just above the long-term average (2.6 poults/hen) on a statewide basis. With the exception of the Tidewater Region, all regions had above an average number of poults/hen. Since juvenile birds account for 40–60% of the fall harvest, reproductive success greatly influences turkey population size and subsequently fall harvest. It is also worth noting that although reproductive success was near average, the number of turkeys seen per 1,000 miles driven during the survey period was considerably lower than the long-term average at only 14 turkeys per 1,000 miles.

Acorn abundance also has a significant impact on fall harvest rates. In years with abundant acorns, wild turkey home ranges are small, which makes them harder for hunters to find. They also tend to spend more time in the woods foraging rather than in open habitats where they would be susceptible to harvest. As a result, harvest rates often decline when mast is abundant. On the other hand, during years of acorn scarcity turkeys must range further to find food and this typically helps hunters find and harvest more birds.

Similar to trends observed in the fall of 2020–2021, the archery harvest (bows and crossbows combined) remained relatively high making up approximately 19% of the overall harvest. This trend could indicate acorn abundance that was not uniform across the landscape. In areas where there were acorns, the reports were generally of “bumper” crops. Since archery hunters are hunting during the period that most oak trees are dropping their acorns, this could indicate they were able to successfully key in on high food availability in those more productive areas.

Thanksgiving Day and the recently added Wednesday before Thanksgiving continue to be popular fall turkey hunting days statewide. This new day was added in 2019 statewide except for counties that only have a 2-week season. This year a total of 391 birds were harvested during that two day timeframe, accounting for nearly 24% of the total fall harvest. Thanksgiving Day accounted for the single highest day of harvest with 252 birds or 15% of the total fall harvest.

Unfortunately, it appears the trend is continuing despite these efforts. Many hunters have shifted to hunting other species and many have decided to hold onto their turkey tags to utilize during the spring season. While fall turkey participation may be lagging, the excitement of those who do participate is not.

For additional details on wild turkeys and their management in Virginia please visit the Wild Turkey web page. 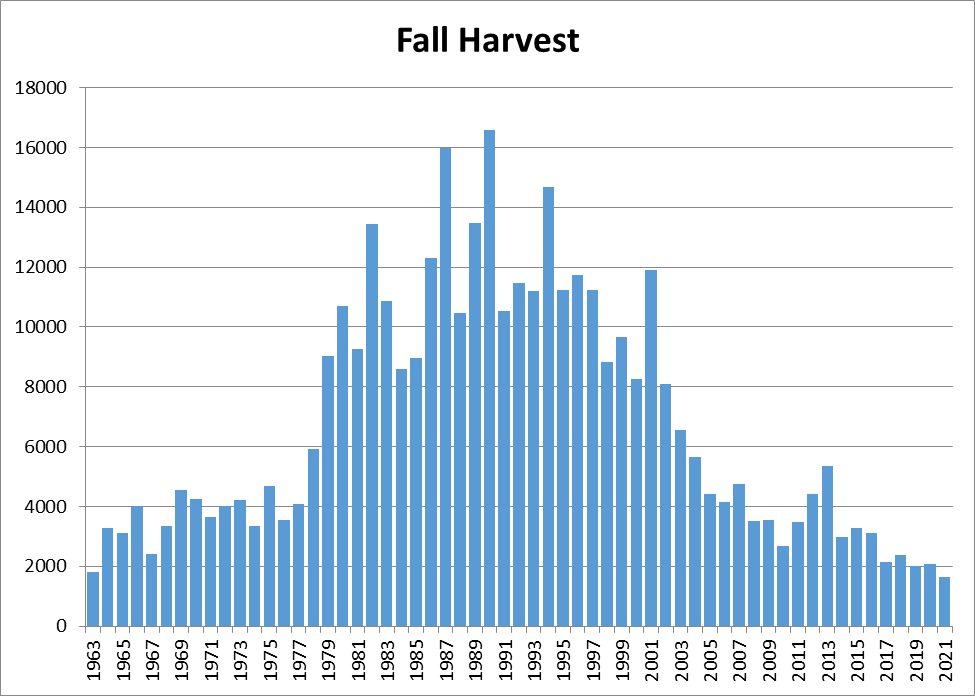