What are zebra mussels?

Zebra mussels are freshwater bivalves (relatives of clams) and are appropriately named for the alternating wavy dark (black/brown/green) and light (yellow, cream, white) bands on their shells, which vary or can be absent. Adults are D-shaped and generally thumbnail-sized but can reach a maximum size of about two inches. While these bivalves are relatively short-lived (typically 2–3 years), they are extremely prolific breeders, which contributes to their ability to spread rapidly and abundantly. An adult female zebra mussel can produce about 30,000–40,000 eggs each reproductive cycle and upwards of 1 million each year. Free-swimming microscopic larvae, called veligers, will drift in the water for several weeks and then settle onto any hard surface they can find. Zebra mussels also can tolerate a wide range of environmental conditions and adults can even survive out of water for about 7 days. Unlike other freshwater bivalves, zebra mussels are able to attach to surfaces using their byssal threads (see photo) and form large clusters similar to oyster beds. It is not uncommon to find populations with densities of over 100,000 individuals per square meter, with some reaching up to 1 million per square meter. (See the lifecycle of a zebra mussel).

Where can they be found?

Zebra mussels are native to the Caspian, Black and Azov seas of eastern Europe. This exotic species was first discovered in the U.S. in Lake Saint Clair, Michigan in 1988 and is believed to have been introduced in 1986 through ballast water discharge from ocean-going ships. Since their initial discovery, zebra mussels have spread rapidly throughout the Great Lakes and Mississippi River Basin states and other watersheds throughout the eastern and central U.S. In August of 2002, zebra mussels were documented for the first time in Virginia. This infestation occurred in an abandoned quarry in Prince William County, which is used for instructional and recreational scuba diving. The primary method of overland dispersal by zebra mussels is through human-related activities. Given their ability to attach to hard surfaces and survive out of water, many infestations have occurred by adults hitching rides on watercraft. The microscopic larvae also can be transported in bilges, ballast water, live wells, or any other equipment that holds water. With discovery of this population in Millbrook Quarry, transport on dive gear has emerged as a major concern as well. 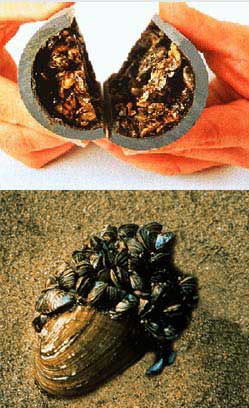 Zebra mussel invasions have caused tremendous economic and ecological damage. Many water treatment and power facilities must now treat their systems to keep them free of zebra mussels, beaches must be periodically cleaned of decaying masses of dead zebra mussels, and bottom-dwelling organisms and fisheries have been negatively impacted. In the United States, Congressional researchers estimated that zebra mussels cost the power industry alone $3.1 billion in the 1993–1999 period, with their impact on industries, businesses, and communities over $5 billion. In Virginia, the Millbrook Quarry population posed a substantial and immediate threat. While isolated, the quarry is separated from Broad Run by a mere 200–300 feet and is actively used as a dive site. Lake Manassas, just 5.5 miles downstream of the quarry, serves as the primary water supply for the City of Manassas and a number of municipalities in the area. Just downstream of Lake Manassas is the Occoquan Reservoir, the primary water supply for over 1 million people in northern Virginia. If zebra mussels escaped to the adjoining waters, it is estimated that treatment at these water facilities would cost approximately $500,000 – $850,000 per year for chemicals and system maintenance.

Zebra mussels also represent a significant threat to the Commonwealth’s native ecology and wildlife communities. Zebra mussels are extremely efficient filter feeders. One adult can filter about a quart of water per day. While water clarity is improved as they filter out microscopic organisms, zebra mussels effectively remove the food base upon which many of our native fish and freshwater invertebrates are dependent. Because of their ability to rapidly colonize any hard surface, zebra mussels also pose a significant risk to many bottom-dwelling species, including our rare and endangered freshwater mussel populations. Zebra mussels can attach themselves to the native mussel shells, making it impossible for these animals to open or close, burrow in the stream bottom, or feed. Zebra mussels also can damage boat hulls and engines.

What can you do? 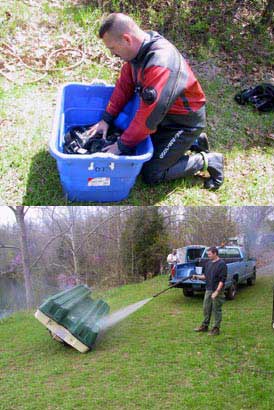 Because of their potential impacts, the Virginia Department of Wildlife Resources (DWR) worked with a number of state, federal, and local agencies to eradicate the zebra mussel population at Millbrook Quarry, and confirmed the successful eradication of the infestation in May 2006. Unfortunately, the likelihood of future introductions is significant, and zebra mussels have few natural predators which are native to Virginia, or plentiful enough to have a significant impact on zebra mussel infestations. Therefore, it is up to each of us to take extra precautions to stop the spread of zebra mussels at Virginia’s borders! The following actions should be taken with any equipment used in potentially infested waters:

If you believe you have seen or found a zebra mussel, please contact DWR immediately at 804-367-6913.

For additional information regarding zebra mussels, check the following site:

The Virginia Department of Wildlife Resources needs your help in the continued fight against the invasive exotic zebra mussel! Though Virginia completed the first successful open waterbody eradication of a zebra mussel infestation in early 2006, monitoring the state’s many waterways is necessary to document our zebra mussel-free status and for early detection of new populations. If you boat, fish, swim, dive, or spend time on Virginia’s lakes, rivers, stream, ponds, or quarries, please complete the Zebra Mussel Survey (PDF) and return it to us. Your assistance is greatly appreciated!