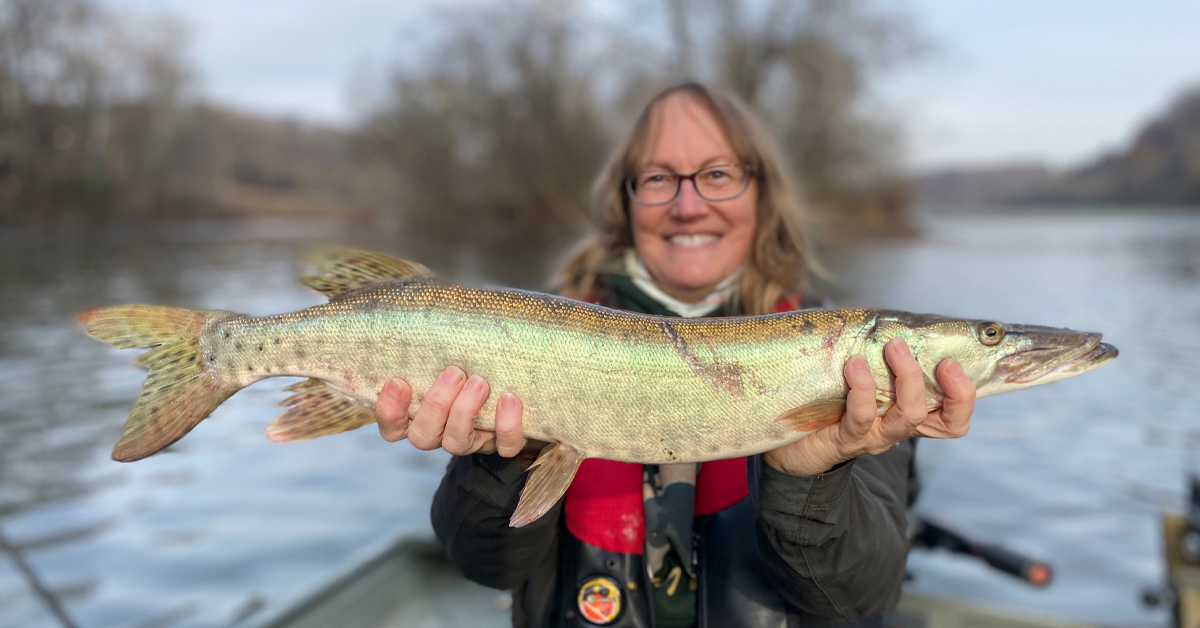 Lynda Richardson and her first musky.

Lynda Richardson, the art director of Virginia Wildlife magazine at the Virginia Department of Wildlife Resources (DWR), enjoys fishing in her spare time. She tells this tale of catching her first “fish of a thousand casts.”

It was a cool, overcast morning when my husband Mike Ostrander and I arrived at a boat launch on the Upper James River. The Virginia Angler’s Club was having an outing that day targeting muskellunge, or “musky,” which were known to prowl this stretch of river. I had just been accepted as a member of the club, so I was excited at the opportunity to hopefully submit a musky as my first fish towards the club’s Freshwater Expert rating. I had never caught a musky before and chances were slim. This fish is one of the hardest to catch and is reverently referred to as “the fish of a thousand casts.” I still had my hopes up!

By 7 a.m., we launched three jon boats with seven members and made our way up river to start the adventure. Before I got into our boat, I glanced around at everyone’s gear. I will have to say that looking at the lures hanging heavy from everyone’s rods was a bit intimidating. Most of the lures looked like whole fish and were longer than my hand! I reminded myself that we were going after a fierce, apex predator that could eat anything in the river. Gulp!

Our three boats spread out to different locations, and began casting around trying to figure out where the musky were lurking. Eventually, each boat started getting some action in the form of “follows.” A “follow” is when a musky trails your lure. Sometimes you see it as a big swirl around your bait as the fish turns away, unimpressed. Other times, you may see the wave of a “torpedo” bearing down on your lure, a long, green flicker near your bait, or nothing at all until a huge head is next to the boat looking at your retrieved lure. Because of these annoying musky tendencies to follow and not bite, you should learn to always make figure-eights at the end of your retrieve. Put your rod tip down into the water about a foot or more and make a few figure-eights moving the bait around quickly. This action can sometimes entice an indecisive musky into grabbing your lure.

Cell phone calls back and forth reported follows and potential strategies. It seemed like the musky follows mostly occurred near the riverbanks.

Around 9 a.m., we drifted down the south bank casting to “there has to be a musky there” spots and I remember being really pleased with how well I was casting. The tree limbs, roots, and logs were all potential snags for the 12 lb. line and swim bait I was using. My arm and shoulder were already fatigued from all of the casting, but I winged my lure inches from the bank next to a tree root. Hitting the water with a heavy splash, I jerked it a little and began to reel when suddenly, I felt the weight of a fish pulling back. I set the hook and it was fish on!  “OMG, OMG, I have something!”

Mike then yelled what I most wanted to hear, “It’s a musky,” he laughed. “You have a dang musky!”

Needless to say, I was beyond excited, but also knew it would probably come off. Mike reassured me to take it easy and not rush bringing the fish in. I was so afraid that I would lose my prize but concentrated hard, reeling, holding on, and reeling again, watching it dart and pull, shimmery green in the shallow water.

Once I got it near the boat Mike netted the beautiful fish and I stared down at it as he removed the hook. “DANG,” I laughed. “I caught a baby.”

“But it’s a MUSKY,” Mike laughed back and we bumped knuckles and I danced in place hooting and hollering. Mike weighed the little tyke and it was only 5 lb., but I was so proud of that fish.  After a few quick pictures, I held it nose to the water and let go.

Mike starting emailing pictures to some of the other anglers that a musky had finally been boated while I continued celebrating with fist bumps towards the sky.

Around 4:30 p.m., we motored to the boat ramp and began to haul our boats out. It had been a fantastic fall day with a great bunch of folks willing to share angling tips and potential strategies. After all the boats were pulled we gathered around and exchanged ideas on fishing for musky and other adventures. I was congratulated with elbow bumps and big smiles. It had been a very successful trip with nearly everyone experiencing a few follows and exciting hookups, though I was the only one to have boated a musky.

The musky’s reputation as “the fish of a thousand casts” remained intact and my musky was accepted as my first fish and entered into the catch database of the Virginia Angler’s Club. Next, I’m going after my musky’s great, great grandma!

Each month in the Fishing Notes from the Field email, we at the Department of Wildlife Resources (DWR) are going to highlight one of our constituents and the role fishing plays in their life. Are you an avid angler who would like to be featured or know someone who would be great to feature? Have a great fishing story to tell? We’d love to hear from you! Just email social@dwr.virginia.gov and let us know!

Aiming to hook a musky yourself? Check out DWR’s Guide to Muskellunge, including where to go, techniques to use, and more!