Muskellunge (Esox masquinongy) are the largest member of the pike family. Normally olive to dark gray on its back, with grayish to bluish to yellowish sides. Sides may have faint vertical bars, spots or blotches.

How Do I Fish For Musky?

Musky are an exciting and addicting fish to target in the waters of the Commonwealth. However, some specialized techniques and equipment are required to hunt for these trophy fish. If you are looking for a new and heart pounding fishing experience, our Musky Fishing 101 video can teach you the basics on how to get started.

Where Do I Fish For Musky in Virginia?

We are happy to announce the Musky Angler Diary Program! Participating in this program is a helpful tool for biologists in managing and refining Musky fisheries.

The process is easy! Simply record how many hours you fish, how many persons are in your fishing party, how many Musky you encounter but did not catch (follows, strikes, or Musky lost), how many Musky you catch (measure them and look for tag numbers), whether or not you harvested or released the musky, and how much money you spent on the trip. More on directions for diary entries can be found here.

Feel free to add in any past entries you may have kept for your own records, too. Start your Musky Angler Diary here! 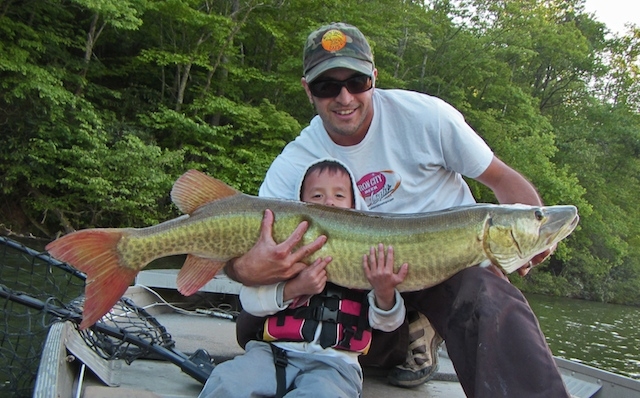 River fishermen use rafts, kayaks, canoes, or small boats with electric motors or small outboards to float larger pools and fish near woody debris, large boulders, drop offs, or weed lines. We suggest using an eight foot medium heavy rod with fast action and a bait casting reel with a 6.4 gear ratio. Fill the reel with 80 lb. braided line, tipped with an 80lb fluorocarbon leader. You can also use a steel leader if you like.

There are many Musky baits on the market, but most fall into five categories: Inline spinner, crankbait, top water, soft plastic, and jerk baits. For beginners, try using an inline spinner or top water bait. They can be very productive from May – July and are easy to use. Crank baits and soft plastics are good choices in the fall and winter months when muskies tend to target larger prey items like suckers. Jerk baits are the most challenging to use, but can be effective in any season.

Anglers interested in trying to fish with live bait should use large hooks, 4/0 or larger, some anglers simply allow 8 or 12-inch suckers, shad, or carp to swim free below the boat. Combining this method while casting artificial lures can be very effective.

Muskies are commonly caught in lakes by trolling deep water with large crankbaits, spoons, and inline spinners. Be sure to carry a large net with you as well as long nosed pliers, jaw spreaders, hook cutters, and hook resistant gloves. 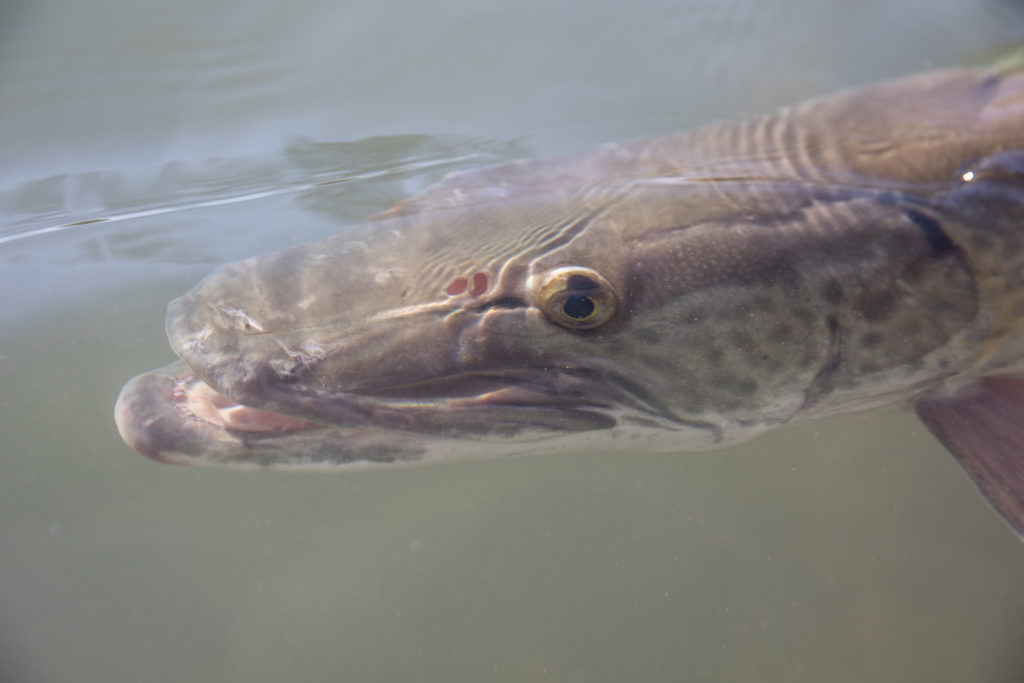 Muskies prefer cool, clear lakes with abundant vegetation or long pool areas of rivers near fallen trees and other submerged structure. They prefer water temperatures ranging from 62°F – 75°F. Water temperatures up to 89°F can be stressfully tolerated, but Musky stop feeding at 84°F. During the summer Musky can be found seeking refuge where the water is cooler. When this behavior is observed it is recommended to avoid targeting these fish, as they are stressed due to warming water temperatures.

In Virginia, Muskies spawn in early spring at the end of March through April when waters reach 50°F – 60°F. Sexual maturity is reached at 3–5 years of age. Eggs are fertilized by 1–3 males and broadcast over aquatic vegetation, leaf mats or gravel bottoms in shallow bays and coves of lakes, or in slack pools or backwaters above or below riffles in rivers. Females release 10,000 to 250,000 eggs depending on size. Most Musky populations in reservoirs are maintained through stocking. Some rivers like the James River and the New River are maintained through natural reproduction. 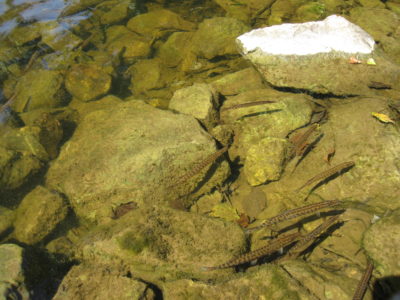 Musky are not believed to be native to Virginia. The first stocking of Muskellunge occurred in the New River in 1963.  Since then more resources were added to the list of stocked waters or occupied by both stocked and self-sustaining populations.

Initially, hatchery musky were imported from New York, Pennsylvania, West Virginia, and Tennessee. Over the years DWR staff shifted to collecting their own brood fish, harvesting eggs, and raising Musky to various sizes to stock.

Our current stocked Muskies are considered advanced fingerlings and range in size from 8-12 inches. These fish are incredibly challenging and costly to raise. DWR staff begin the process of rearing musky in March and April.

Once hatched, the musky fry are stocked into ponds at Buller as well as Front Royal Fish Hatchery. The fry feed on plankton, insects, and small minnows. Musky are incredibly carnivorous. If minnows run short they will cannibalize their brothers and sisters. Hatchery staff continue to monitor the ponds throughout the summer. In the fall the ponds are drained and the fingerling musky are harvested, loaded onto stocking trucks, and distributed to select resources. 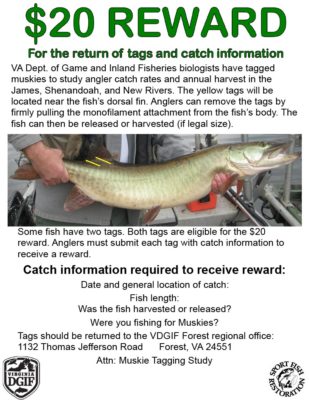 Spring electrofishing and trap netting surveys are conducted on an annual or biannual basis. Trap nets are used to sample reservoirs in late March through early April; and electrofishing boats are used in January or February to sample river populations. All fish collected are measured to the nearest millimeter, weighed in grams, and released unharmed. Biologists will also periodically tag fish to measure harvest, growth, and movement.

For the past four years biologists have been tagging musky using a yellow floy tag on both the Upper James and South Fork and Main Stem Shenandoah Rivers. In the spring of 2019 the New River was also added to the project. The goal of this study is to help biologists determine how heavily these populations are targeted by anglers. The tags are located next to the musky’s dorsal fin. Anglers are encouraged to remove the tags by firmly pulling on the monofilament attachment and removing the entire tag from the fish’s body. The fish can then be released or harvested (if legal size). A $20 reward is awarded to anglers that mail in the tag along with the required information (see reward poster).