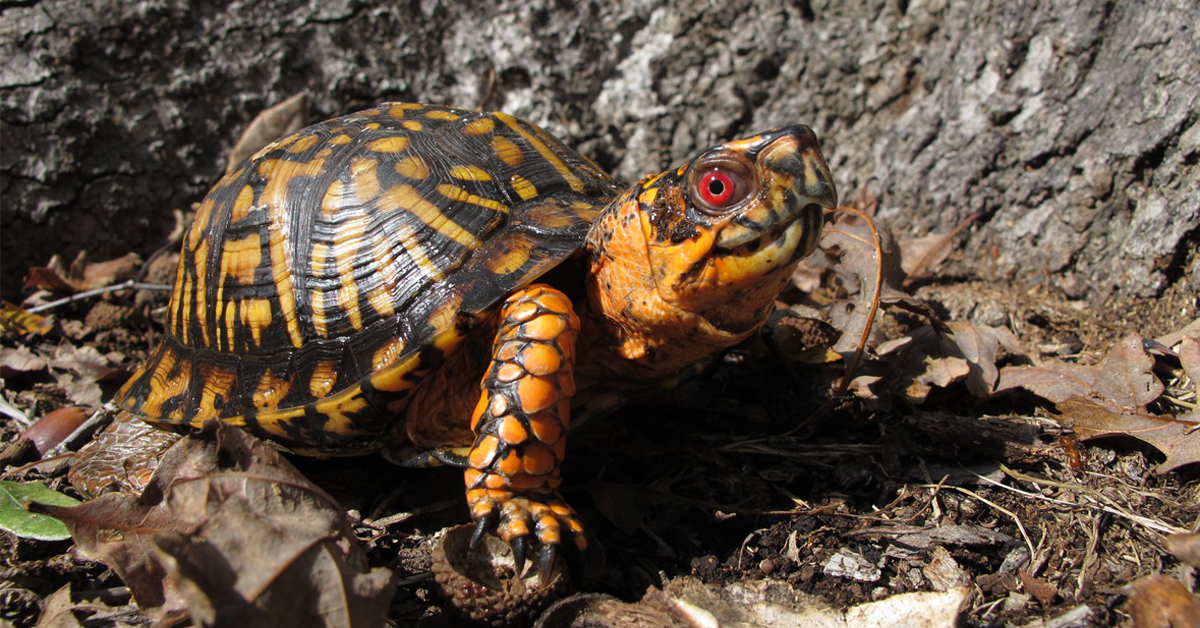 Woodland box turtles often dig in under logs. Box turtles spend the winter burrowed underground where they hibernate until spring.

Chances are, whether in your backyard or on a hike through the woods, you’ve seen an eastern box turtle at some point in your life. Also called a woodland box turtle, this five- to six-inch-long member of the reptile family has a high-domed, dark shell with yellow and/or orange splotches. One of the most recognizable animals in the Commonwealth, they are found in almost every county. While most of Virginia’s turtles are aquatic, box turtles live primarily on land.

Although still commonly seen in the wild, box turtles are believed to be in decline across the state, says Department of Wildlife Resources (DWR) herpetologist John (J.D.) Kleopfer. Road mortality poses the most serious threat to their conservation. “Every year hundreds are killed on Virginia’s highways as they cross roads to get from one patch of forest to another,” said Kleopfer. “Although their shell is an effective defense against predators, it’s no match against a 3,000 pound car.” Other concerns include the use of pesticides and loss of habitat.

These box turtles can live for more than 100 years in the wild. “Unfortunately, the appeal of these peaceful little beasts and their inability to escape make it tempting for people to pick them up and take them home as pets,” said Kleopfer. “When the turtles are removed and placed in captivity for an extended period of time, they lose their ability to survive in the wild,” he says.

The Virginia Herpetological Society (VHS) launched the Eastern Box Turtle Census Project to create awareness about this iconic species and fill in gaps in the documented distribution of the turtles. This information will, in turn, allow DWR to better manage turtle populations and determine if more protection is needed. Currently, it’s illegal to sell or purchase any turtle native to Virginia, but legal to have up to five turtles as pets.

The VHS invites citizens to report box turtle sightings using their online Box Turtle Reporting Form. By contributing data on sightings, “citizen scientists” will help biologists monitor population trends and create distribution maps that will be used to develop conservation strategies to ensure that the species continues to thrive.

May and June are peak months to see box turtles on Virginia’s highways as they forage, bump (literally) into mates, and search for suitable sites to lay eggs. If you see a turtle on the highway, make sure you can stop safely, then gently remove it to the side of the road in the direction it’s heading. Do not move it from the area. Box turtles have a small home range where they spend their entire lives, and get disoriented if moved.

If you happen to come upon a turtle lumbering across your lawn, let it go on its way. They eat insects, snails, and slugs that can do a number on gardens and landscaping. And be mindful of these slow-moving reptiles when mowing or weed whacking.