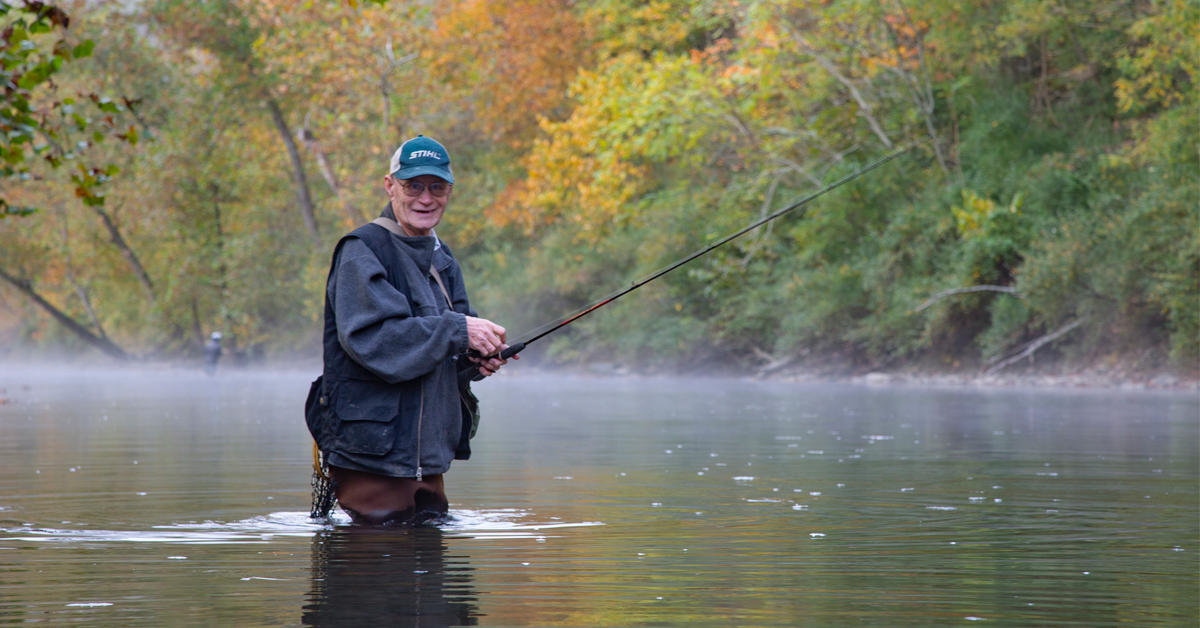 David Legg, state record-holder for fallfish, on the water.

At first, David Legg thought he’d gotten his spinner-fly snagged on the bottom of the Jackson River. “But then the rod tip started bouncing, and I thought, ‘If I’m hung up, it won’t do that,’ ” he said. “Then I pulled on it and the fish started running. He took off up the river and down the river. I saw the big silver streak on his side, and I thought, ‘This is the one I want.’ As soon as I got him in the net, I knew he was the record.”

Legg, age 72, and a dedicated angler for more than 60 years, decided to target fallfish exclusively in 2020 after seeing that the Department of Wildlife Resources (DWR) added the species to the Virginia Angler Recognition Program in January 2020. “I was looking through [the regulations], saw the fallfish added, and said, ‘Oh! I know where they are!’ ” he recalled. Legg, a retired sergeant of 38 years with the Virginia State Police, caught his first citation fish in 1988 and has expert angler status in brown trout. He thought it would be a fun challenge to add expert angler status in fallfish to his record.  Legg, a Covington local, knew that the nearby Jackson River tailwater has a great population of fallfish in addition to the wild brown and rainbow trout fisheries.

“Fallfish are the largest native minnow species in Virginia and can be readily caught with an artificial approach or bait on rivers and streams throughout the Piedmont,” said Alex McCrickard, DWR aquatic education coordinator. “Fallfish are highly underappreciated and are actually a keystone species in our rivers and streams here in Virginia. Fallfish build mounds during the spawning season each spring. Their nest mounds are essential for communal spawning which so many other species of fish rely upon each spring. Excess sedimentation from urban sprawl and agricultural practices can negatively impact fallfish spawning habitat, which can have a ripple effect on a streams’ fish assemblage.”

“Attributes such as a torpedo-shaped body, large tail, and silvery appearance together with an impressive fighting ability as earned the fallfish the nicknames of ‘Shenandoah tarpon’ and James River bonefish,’ ” said Mike Pinder, DWR fisheries biologist. Read more about the fallfish in the Virginia Wildlife article “Fallfish: Little Tarpon of the Commonwealth.”

This year, Legg has caught 30 trophy-size fallfish, earning him the expert angler title in that species three times over. “Once I got those first 10, I made it my goal to get the state record,” Legg said. Now that he’s accomplished all that, his goal is to beat his own fallfish record before someone else does. 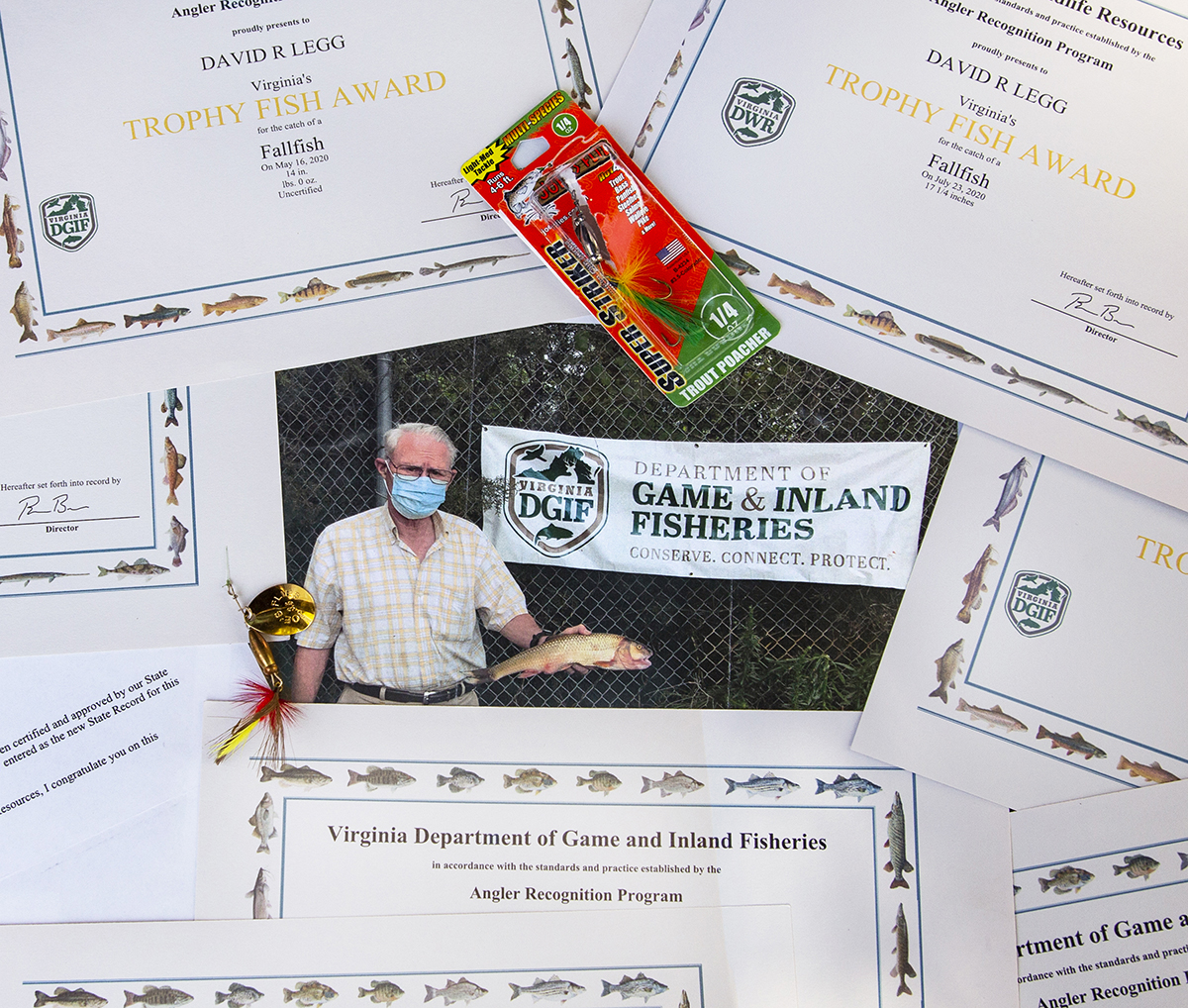 David Legg and his state-record fallfish (center) and many of his citations.

Legg caught his state-record fish on a Joe’s Flies spinner/fly combination on 12” test line. “If you follow the directions on the back of the Joe’s fly, it tells you to crank it just fast enough to keep it off the bottom, and I do that,” he said. “Throw it upstream at a good 45-degree angle and keep it moving. That’s what works for me. I’m trying to be near the bottom. I prefer the little brookie pattern, and the gold spinner blade. Silver will catch the trout, but in my experience the fallfish like the gold.”

Legg targets deep holes with riffles above them, or a pocket pool to the side. “They like to sit in there and watch something go by and go out and get it,” he said. Legg said he had the most luck with fallfish around 10:30 or 11:30 a.m., when the sun comes out and the water warms a bit.

When asked what tips he had for anglers keen to catch trophy fish or record fish, Legg’s advice is simple. “Time on the water. Go fishing often, and eventually you’ll get them biting,” he said.

On the average, Virginia anglers measure more than 6,000 trophy-size freshwater fish annually. Their accomplishments are recognized by the Virginia Department of Wildlife Resources (DWR) through the Virginia Angler Recognition Program (VARP). Since 1963, when the program began, more than 250,000 trophy fish awards have been issued.

Beginning on Jan. 1, 2021, all submissions to the Angler Recognition Program must be made online through an angler’s Go Outdoors Virginia customer profile. Simply log into your Go Outdoors Virginia account and click on the “Add Catch” tile. Enter the details of your catch and check out—it’s that easy!

Printed fish citation certificates will no longer be mailed from DWR to the angler. Anglers now have the ability to view and print their fish citations from their Go Outdoors Virginia account at home.

Information about the Angler Recognition Program, including the program rules, trophy fish size chart, and how to certify a trophy-size fish, can be found online.