Grab a Paddle and Go! 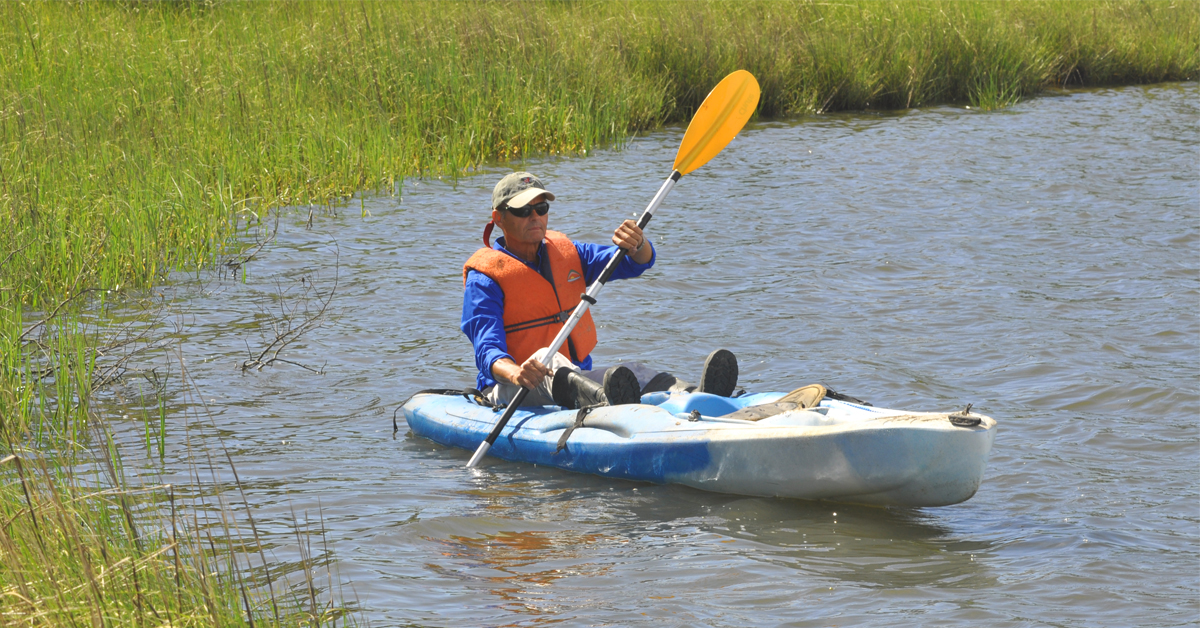 In the May/June 2020 issue of Virginia Wildlife magazine, the article “Grab a Paddle and Go!” details five great destinations for paddling Virginia’s waters, and here are five more! There are so many great places to paddle in Virginia that they couldn’t fit on the pages!

Make sure you check out the May/June print issue for information on the Clinch, New, Roanoke, and South Fork of the Shenandoah rivers as well as the Seaside Water Trail on the Eastern Shore.

If you’re hauling your own kayak, canoe, or paddleboard, there are numerous access points, including the more than 200 public boating access site managed by the Virginia Department of Game and Inland Fisheries (DGIF). DGIF also has lots of information on Virginia’s rivers and streams, as well as its lakes.

Virginia has more than 45,000 miles of rivers, so the possibilities for paddling in Virginia are endless, but here are five stand-out destinations with ecological and historical significance. Some are part of the Virginia Birding and Wildlife Trail. Each is predominantly flat water with minimal runs and suggested with a leisurely half- or full- day journey in mind. Spring, summer, and fall are prime seasons to enjoy a paddling venture. So grab a buddy, and go outside and play.

Possibly Virginia’s most important river, the James continues to contribute to the culture and commerce of its surrounding communities. Envisioning a connected east-west water travel route, George Washington surveyed sites for locks and canals on the James River as far west as Eagle Rock. Elevated towpaths used by horses and mules to pull barges are still visible along parts of the waterway. Also distinguishable are remnants of locks built by immigrant stonemasons using rock quarried from nearby mountains. 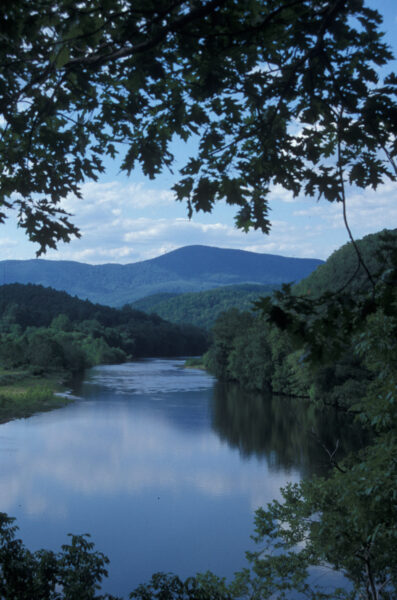 Fifty-nine miles of the upper James River from Eagle Rock to Springwood is designated a Virginia Scenic River by the Virginia Department of Conservation and Recreation. Only rivers and streams with outstanding scenic, recreational, historic, and natural qualities are given this characterization.

Coursing through rural Botetourt and Rockbridge Counties, the upper James River offers astounding views of picturesque valleys, rolling farmland, and the incomparable Blue Ridge Mountains. One of the river’s easiest floats, the five-mile run from Springwood to Buchanan is ideal for first time paddlers. Ten minutes into the trip, a series of gentle Class I rapids crop up followed by another section below the I-81 Bridge.

The middle stretch is primarily flatwater with striking vistas of Purgatory Mountain. This may be an opportune time to cast a line for smallmouth bass and muskie.

On the last leg to Buchanan, watch sunswept banks and rocks for turtles, dragonflies, and skinks. By and large, what a grand and laidback way to spend a morning or afternoon.

Mathews County lies on the Middle Peninsula just south of Virginia’s Northern Neck. Bordered on the east by the Chesapeake Bay, this coastal community is noted for its art galleries, antique shops, and Colonial and Civil War sites. Further west, the historic triangle of Yorktown, Williamsburg, and Jamestown whisk the wanderer to a bygone era. Keep in mind that Captain John Smith explored and mapped Virginia shores in the early 1600s.

After paddling 2 ½ miles, the kayaker reaches New Point Comfort Lighthouse in the Virginia portion of the Chesapeake Bay. Commissioned by Thomas Jefferson and completed in 1804, it is the third-oldest surviving lighthouse in the bay and the tenth-oldest in the United States.

The beacon and a keeper’s abode were once located on the southernmost peninsula in Mathews County. Presently, the rock-encircled lighthouse marks the entrance to Mobjack Bay. A discerning scan of the vicinity may yield floating gannets, gulls, and bay ducks.

Put in at Davis Creek Public Boat Launch at the end of Davis Creek Road. Take out at the landing at New Point Comfort Observation Walkway.

Vast, surreal, and haunting, the Great Dismal Swamp lies in northeastern North Carolina and southeastern Virginia’s Coastal Plain Region near Suffolk and Chesapeake. Paddling Lake Drummond amongst tupelo, Atlantic white cedar, and bald cypress draped in Spanish moss conjures an eerie yet peaceful sensation. In the heart of the swamp, this three-mile wide water body is one of Virginia’s two natural lakes.

Gliding over Washington Ditch, remember George Washington, who surveyed many of the swamp’s drainage ditches in the mid-1700s. Harriet Beecher Stowe acknowledged the swamp’s role in slavery in her novel, Dred: A Tale of the Great Dismal Swamp. Black refugee slaves called maroons sought freedom and safety in this remote forested wetland. For 12 arduous years, enslaved workers hand dug the 22-mile long Dismal Swamp Canal. This oldest continually operating man-made canal in the U.S. opened in 1805 to facilitate navigation and trade between the Chesapeake Bay and Albemarle Sound.

For centuries, the swamp was over-harvested for timber and game. In the mid-20th century, conservation groups across America demanded and achieved the preservation and restoration of the remaining habitat. Recognizing the swamp’s unique geological and ecological features, the National Park Service established a 45,611-acre portion as a National Natural Landmark in 1973. Created in 1974, the Great Dismal Swamp National Wildlife Refuge seeks to restore and maintain the swamp’s natural biological diversity through water control structures, forest management activities, and healthy wildlife habitats.

More than 80 miles of hiking and cycling trails, boardwalk paths, fishing, and hunting are other ways to appreciate this rare place. Part of the Atlantic Flyway, Atlantic Intracoastal Waterway, and Virginia Birding and Wildlife Trail, the Great Dismal Swamp attracts more than 200 bird species throughout the year, including 96 nesting species. Over 300 plant species, 70 species of herptiles, and assorted butterflies also thrive.

In Virginia, the Fall Line is the invisible edge of the Piedmont and Coastal Plain where rivers cross from hard bedrock to soft sediments. It is further defined by an onset of rapids and waterfalls.

Above the Fall Line, the Rapidan River is recognized as one of the state’s premier native trout resources. Originating along the eastern slope of the Blue Ridge Mountains, this pristine native brook trout stream was the Commonwealth’s first fish-for-fun initiative. Smallmouth bass, sunfish, and numerous other piscine species also flourish in this generally swift, clear waterway.

Shrouded with mixed hardwood forests in deep, moist hollows, the upper reaches of the Rapidan River is proclaimed one of the most beautiful of riparian habitats anywhere. Garlanded with laurel thickets, rugged mountains tower above narrow, rocky stream courses and deep valleys.

Bountiful acres of hardwood forests, fields, and riverine habitat comprising this peninsula create exemplary environmental study. Twelve miles south of Ft. Belvoir in Lorton, the park is bordered by Pohick Bay on the north, Belmont Bay on the south, and the Potomac River on the east.

Canoeing and kayaking are the ultimate ways to explore this area. A journey may begin on Kane’s Creek, a hidden estuary encircled by tall grasses and sprinkled with lily pads. Wildlife watchers may get close-up peeks of ospreys, great blue herons, and a multitude of puddle ducks.

Paddling southwestward into Belmont Bay presents an excellent opportunity to sight bald eagles, especially in the morning and early evening. Sunsets are stunning.

Jutting out from the east, the mighty Potomac River is replete with Presidential history, waterfowl, and secret inlets with freshwater marshes. While in the vicinity, outdoorsmen and women may elect to trade in their paddles for a narrated riverboat ride from Alexandria to Mt. Vernon, a harmonious crescendo to a quintessential river voyage.

Signage within the park directs independent boaters to access points.