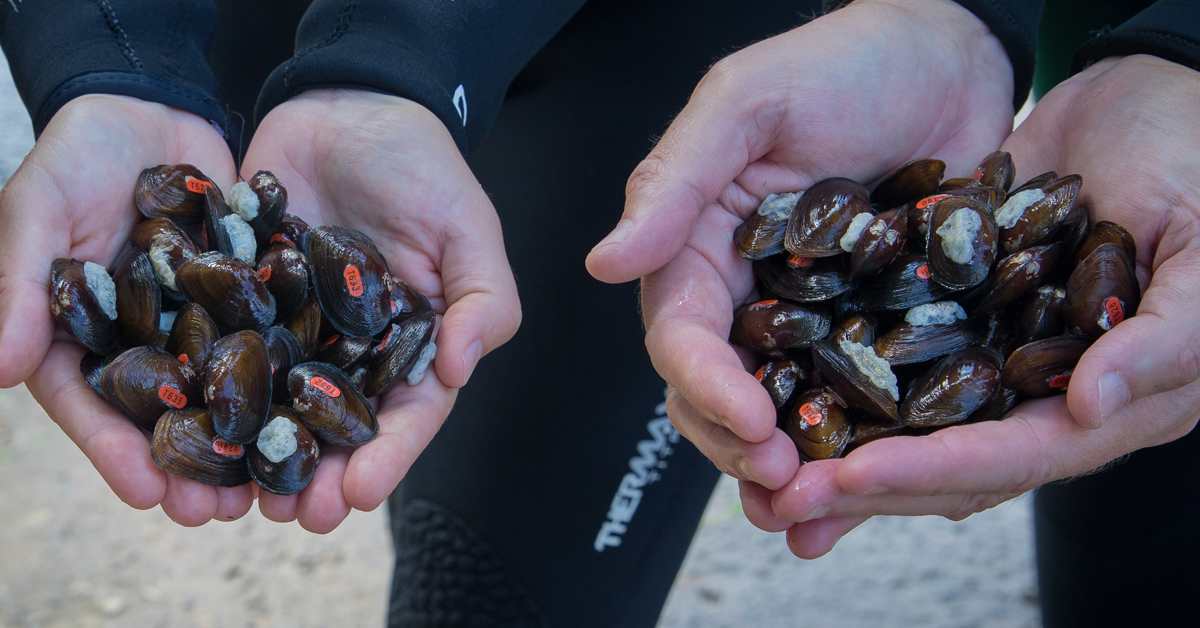 The Department of Wildlife Resources (DWR) and the U.S. Fish and Wildlife Service (USFWS) recently released an endangered species of mussel, the James spinymussel, into the main stem of the James River in central Virginia. James spinymussel hasn’t been found in the James River for more than 50 years, and DWR and USFWS biologists, working toward this release for more than 20 years, hope this event is a step toward re-establishing a native population in the James.

Current wild populations of the James spinymussel exist in smaller tributaries of the James River in Virginia and West Virginia, and in the Dan/Mayo River systems within the Roanoke River drainage in Virginia and North Carolina. “It’s believed to have been lost over about 90 percent of its historic range, including the main stem of the James River,” said Brian Watson, DWR Aquatic Resources Biologist and State Malacologist. “A lot of it probably had to do with pollution due to historic uses on the James River. The James is our largest river in Virginia, so there was a lot of industrial and developmental pressure on the river prior to the Clean Water Act in 1972.” 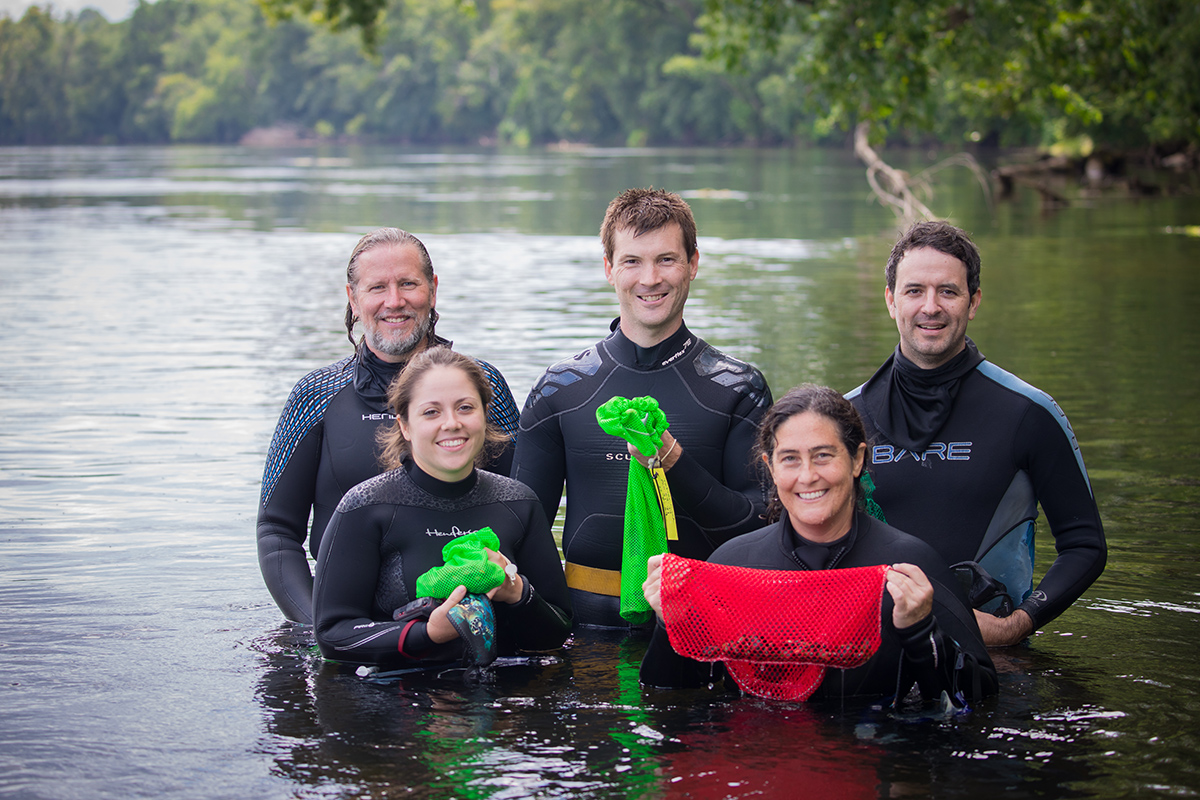 DWR and USFWS biologists getting ready to release James spinymussel into the James, a historic release of a mussel species that hasn’t been spotted in the mainstem James for more than five decades.

The James spinymussel is a small freshwater mussel slightly less than 3 inches in length and is one of only three spined freshwater mussel species in the United States. Adults have a dark brown shell with prominent growth rings and occasionally, short spines on each valve. Young mussels have a shiny yellow shell with or without one to three short spines. Suitable habitat for this species includes free-flowing streams with silt-free bottoms and a variety of flow regimes and water depths. Like other freshwater mussels, this species is a filter feeder. “You may not understand the importance of mussels, but if they are doing well in the water, it indicates that the river or the water is suitable or safe for you to enjoy your activities too. Healthy mussels mean healthy water, and healthy water helps keep humans healthy,” said Watson.

Read more about freshwater mussels and what DWR is doing to restore them.

Freshwater mussels like the James spinymussel are not only indicators of water quality, but also work to filter river water. A single mussel filters gallons of water per day, helping to improve water quality.

Water quality in the James River, as reflected in the James River Association’s (JRA) bi-annual State of the James assessment, has been improving over the last decade to the point where the more common mussel species populations that still inhabit the river are healthy. “What we’re seeing with JRA’s assessment, and what we’ve been seeing with freshwater mussels in the James River primarily from Lynchburg downstream to about Richmond, has given us an indication that conditions are good for the reintroduction of a rare species like the James spinymussel,” said Watson. 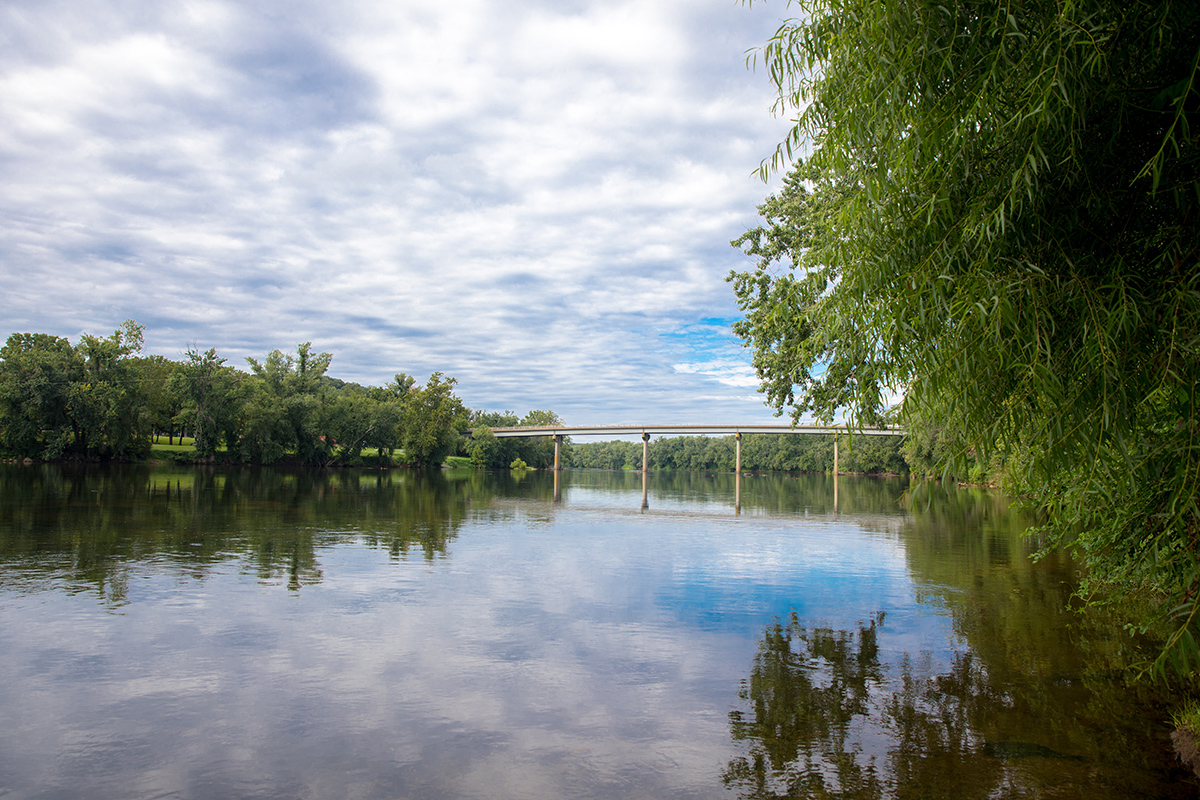 Improving water quality on the James River allowed for the release of the endangered James spinymussel into its waters in an effort to re-establish the species’ population in the James’ main stem.

DWR and USFWS have been working on propagating and raising James spinymussel at the Virginia Fisheries and Aquatic Wildlife Center, a cooperative freshwater mussel hatchery at Harrison Lake National Fish Hatchery operated by DWR and USFWS in Charles City, Virginia, since 2007. They’ve released James spinymussel into existing populations in James River tributaries, but a major goal has always been to re-introduce them into the main stem of the James. “From a rare species standpoint, trying to recover it in the James River and maintain its population there is important for maintaining the survival of the species as a whole,” said Watson. “We have to get it back into the main stem James River in order for the species to be healthy across the entire watershed.”

DWR and USFWS biologists have attached tags with unique numbers to each of almost 1,300 mussels to assist with post-release population monitoring. About half of those mussels are fitting with passive integrated transponder (PIT) tags that can be detected with a special antennae. In the coming years, biologists will use both the PIT tag pings detected and visual monitoring by snorkeling or diving to determine if the released James spinymussels are surviving, reproducing, and sustaining further generations of mussels. It may take at least a decade before the biologists can determine if the population has become healthy and self-sustaining. 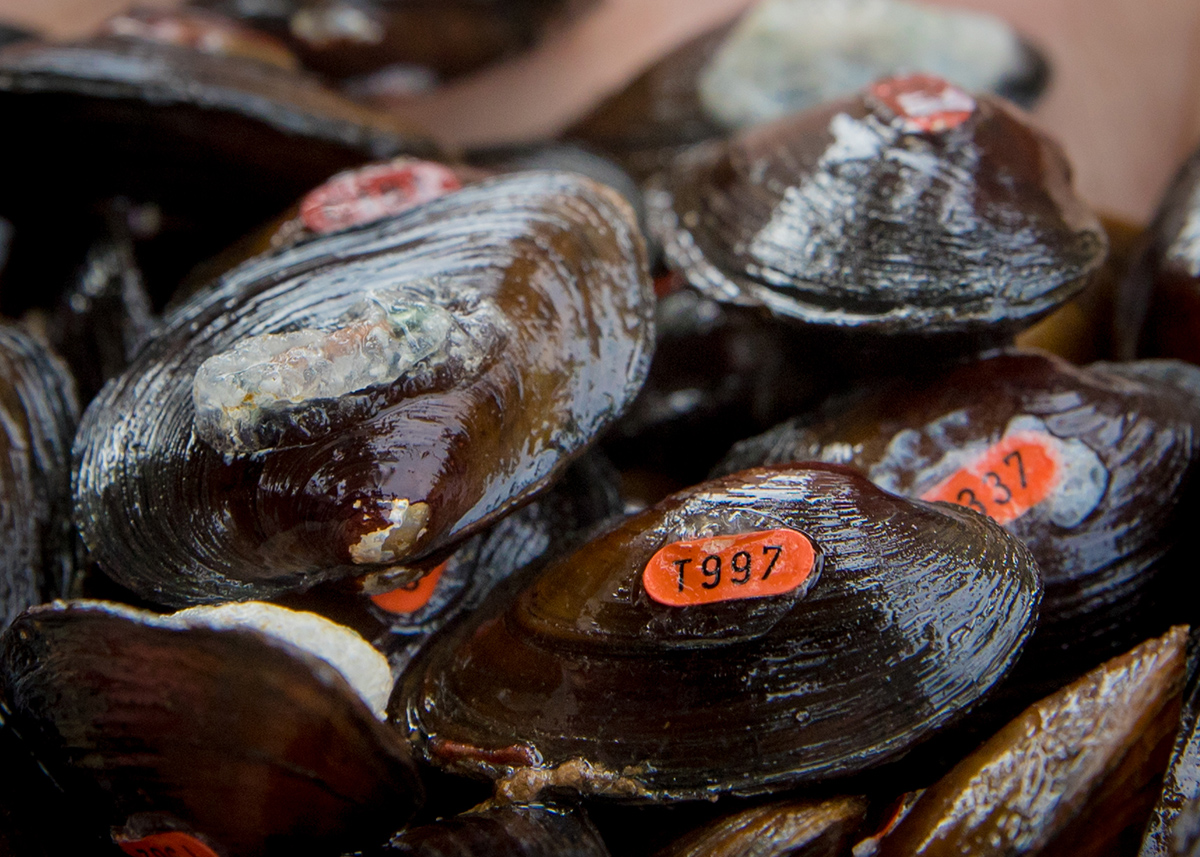 James spinymussels equipped with tags and ready to be released into the James River.

“I don’t pretend to believe that this release is the end of the story by any means,” said Watson. “Hopefully, this species is on the road to recovery, but we still have a number of years to see. The hope is that after we release them, they will survive and reproduce.”

Watson noted that the James spinymussel’s return to the James River has been made possible by a large team working cooperatively. “It’s been a host of individuals over the years who have gotten us to this point, whether it’s some of us that have worked directly with the propagation of the James spinymussel, or other folks who have worked on policy issues with the species that have helped us to get to a point where we can do this,” he said. 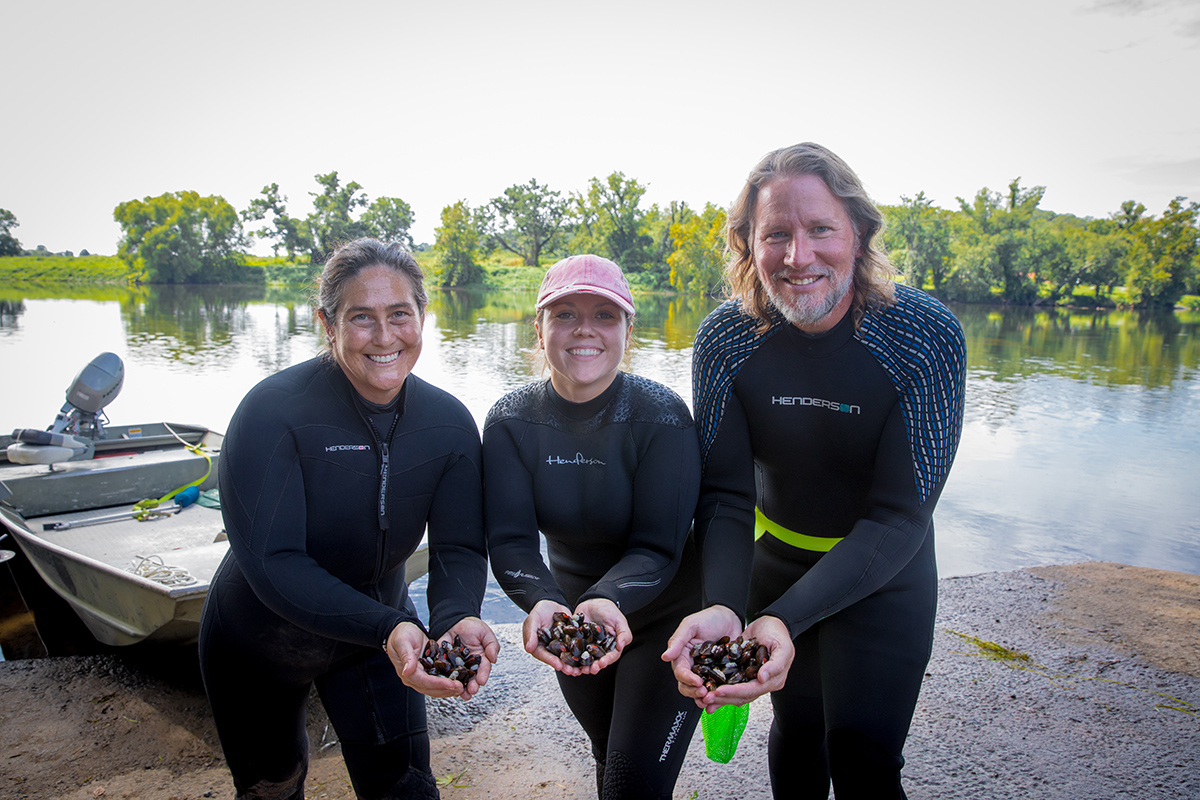 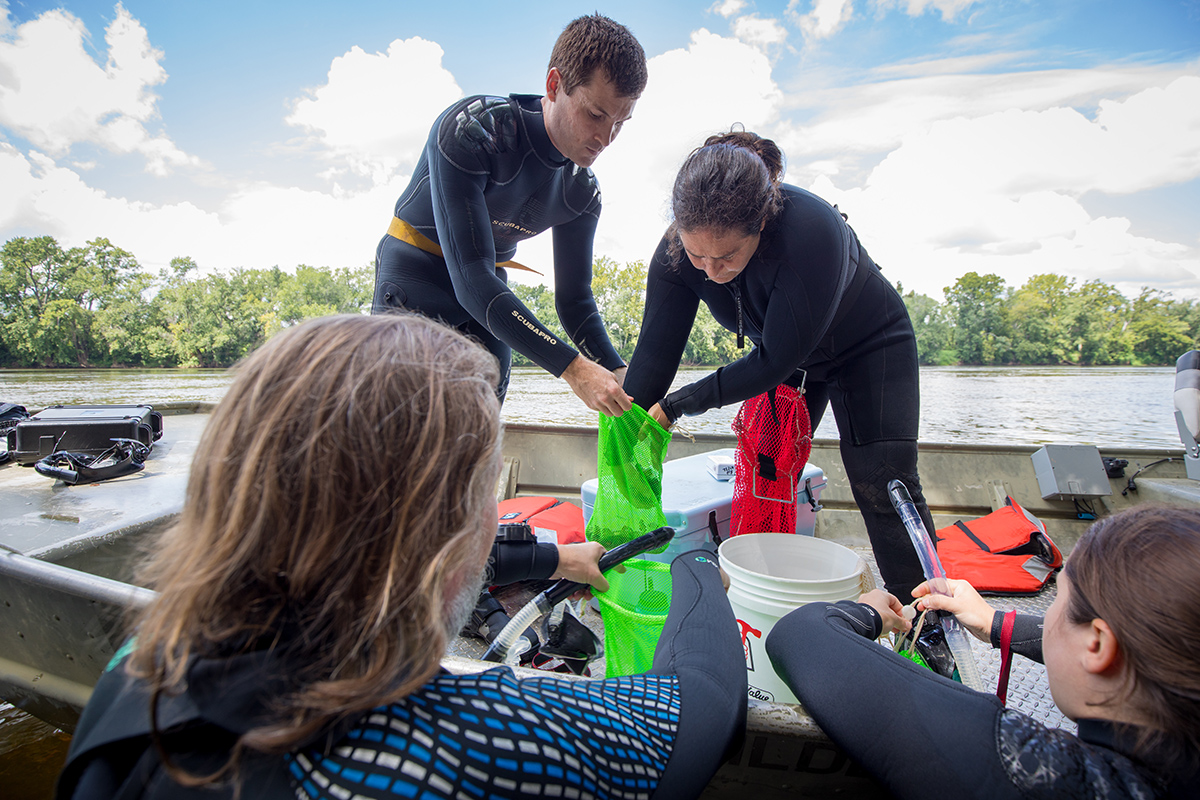 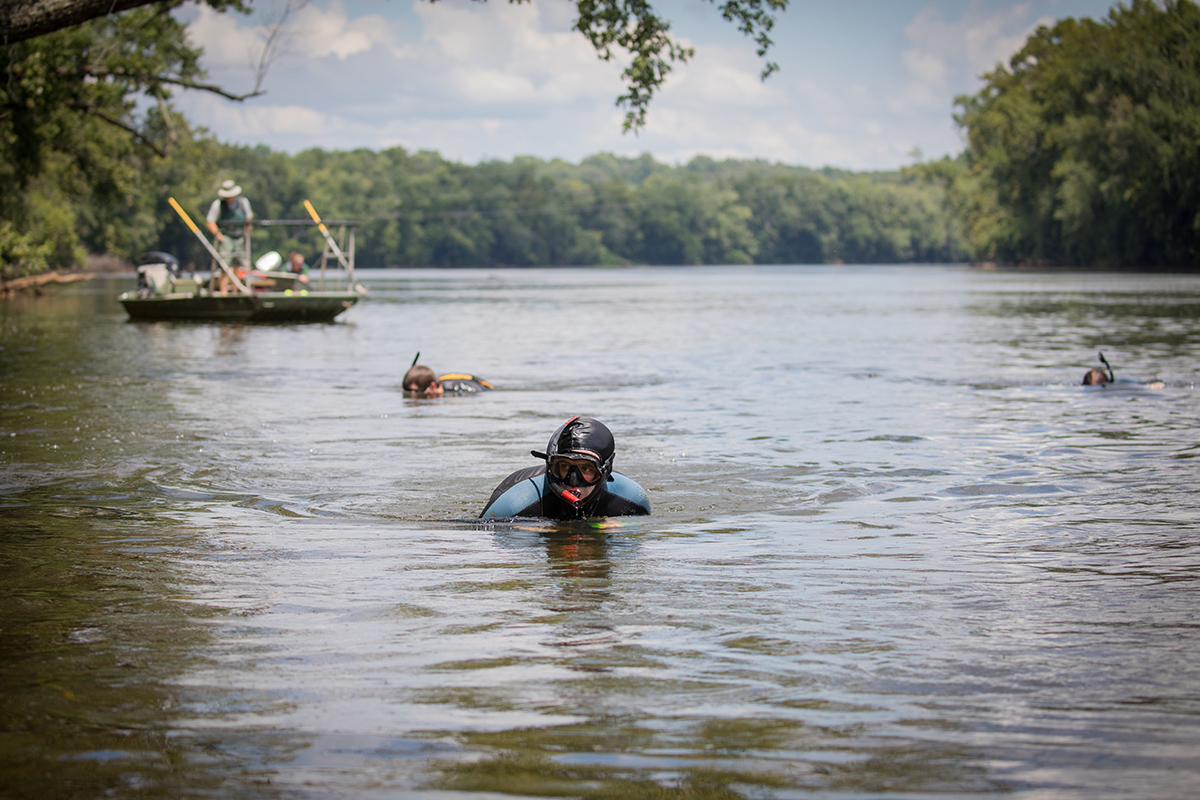 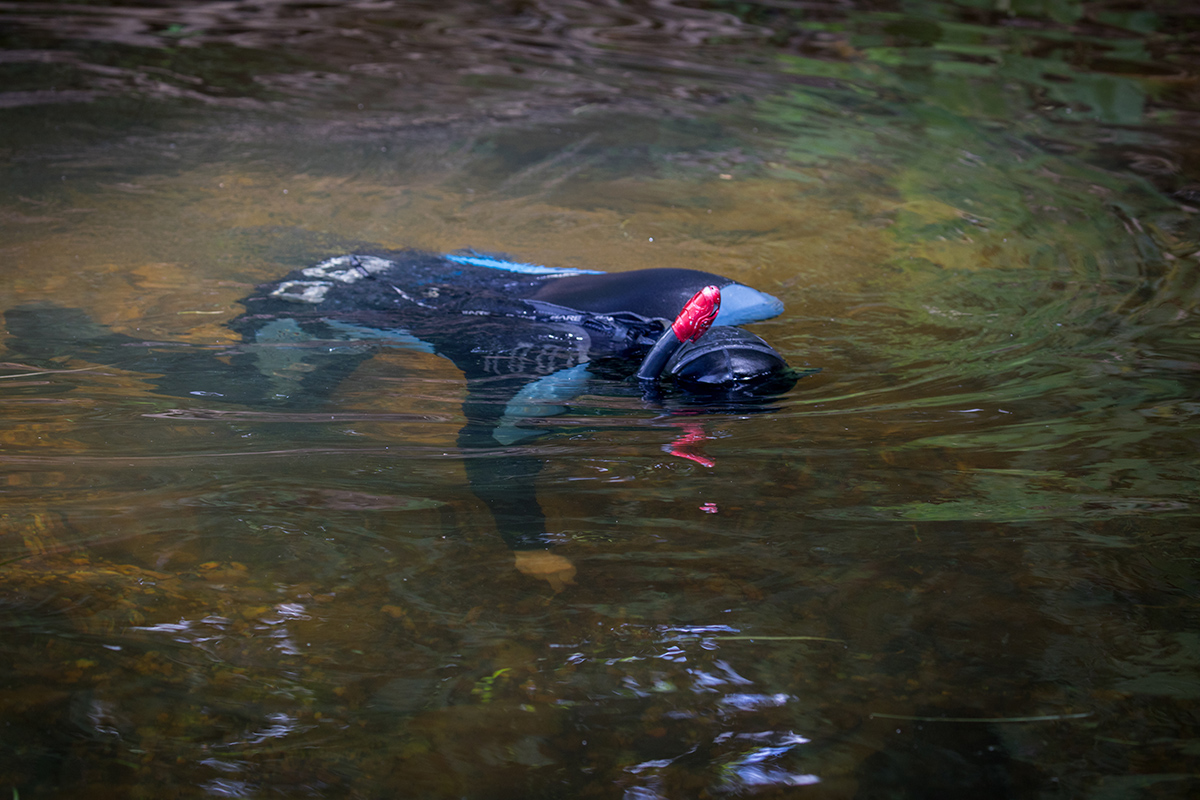