Freshwater mussels are mollusks, similar to their marine clam and oyster cousins, and are an essential component of our rivers and streams that improve water quality by acting as filters.

What is a freshwater mussel?

Freshwater mussels are mollusks and are similar to their marine clam and oyster cousins. They have two shells connected by a hinge-like ligament. Around the world, mussels live in a variety of freshwater habitats but are most prevalent in stream and rivers. They vary in their adult sizes from those as small as a thumbnail to others as big as a pie plate. The wide variety of shapes and colors are reflected in species like purple wartyback, pink heelsplitter, and threeridge. On the stream bottom, mussels are sometimes only noticeable by two small siphons, which are used to draw and expel water. When quickly dislodged, a large muscular foot that is used to move amongst the stream bottom can be readily seen. 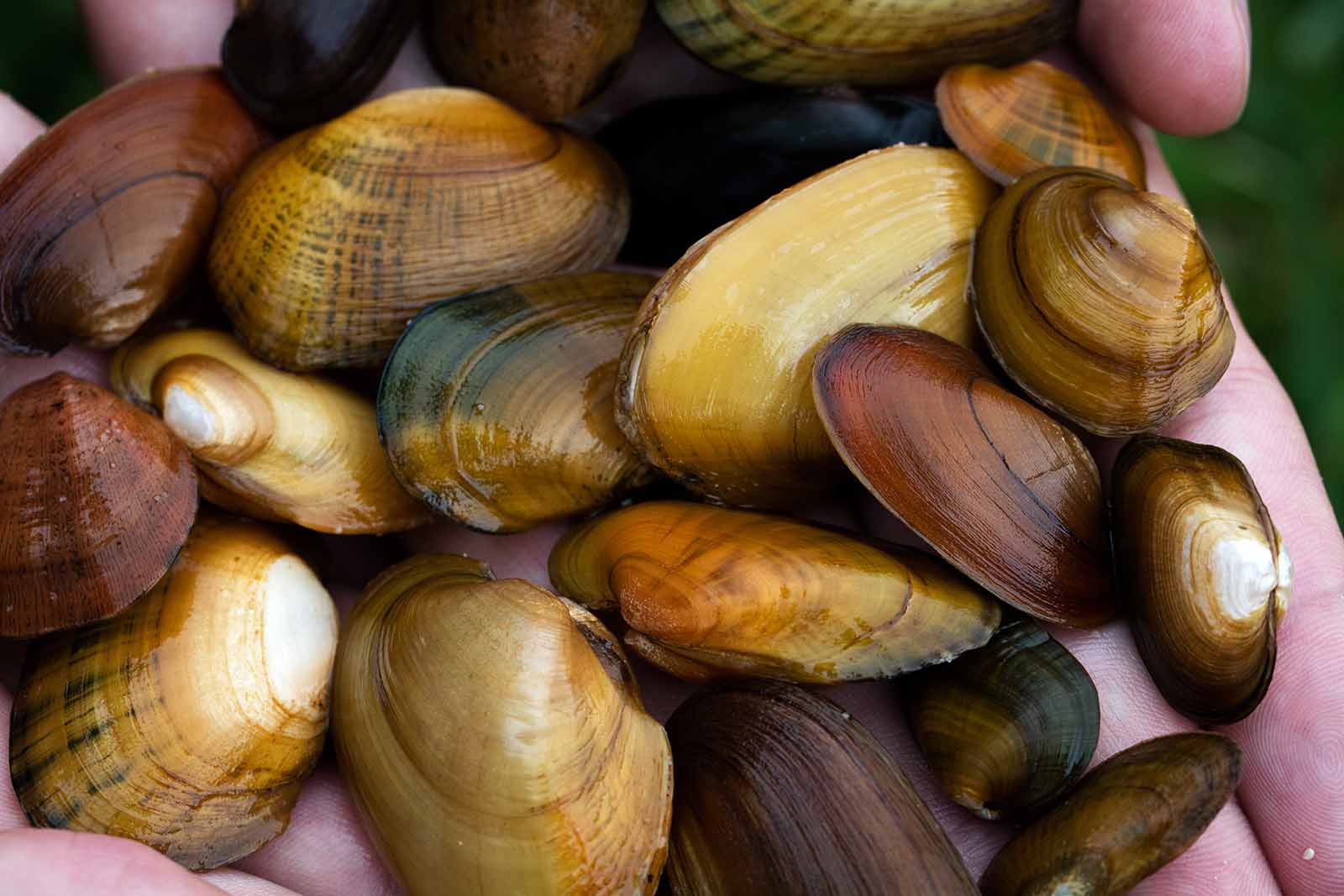 How are mussels distributed?

The diversity of freshwater mussels in the United States is unmatched. Of the estimated 1,000 species worldwide, the U.S. historically contained 304, about 1/3rd of the total world’s fauna. In comparison to other countries and continents like Africa with 96 species, China with 60 species, and Europe with a paltry 12 species, the wealth of the U.S. becomes truly impressive. The lion’s share of this diversity is found in the southeastern drainages of the Ohio, Tennessee, Cumberland, and Mobile rivers. One of the most diverse drainages, the Tennessee contains 102 species, nearly 1/3rd of the country’s fauna! Virginia becomes part of the equation because the Tennessee River headwaters are within the southwestern region of the state. Virginia’s portion of the Tennessee River drainage includes the Powell, Clinch, and Forks of the Holston (North, Middle, and South) rivers. Within these rivers, currently there are over 45 mussel species, several of which are found nowhere else but the upper Tennessee drainage. 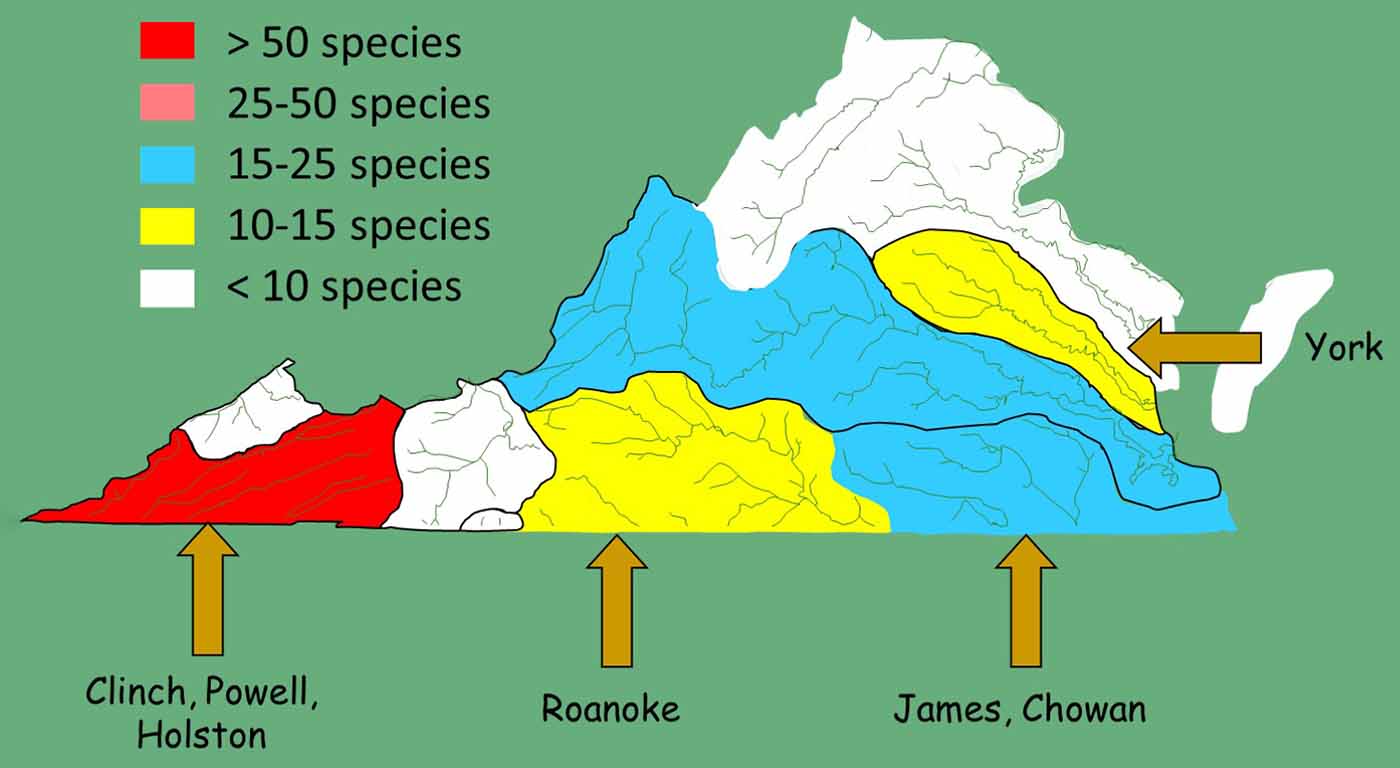 How do mussels function in the environment?

Freshwater mussels are an essential component of our rivers and streams. By their siphoning actions, mussels filter bacteria, algae, and other small particles, which make them one of the few animals that improve water quality. Mussels also serve as a food source to many species of fish, reptiles, birds, and mammals. The outer shell of a live mussel is usually covered by aquatic insects, algae, and plants. Even when dead, the empty shell functions as a nesting site for small fish like madtoms and darters. 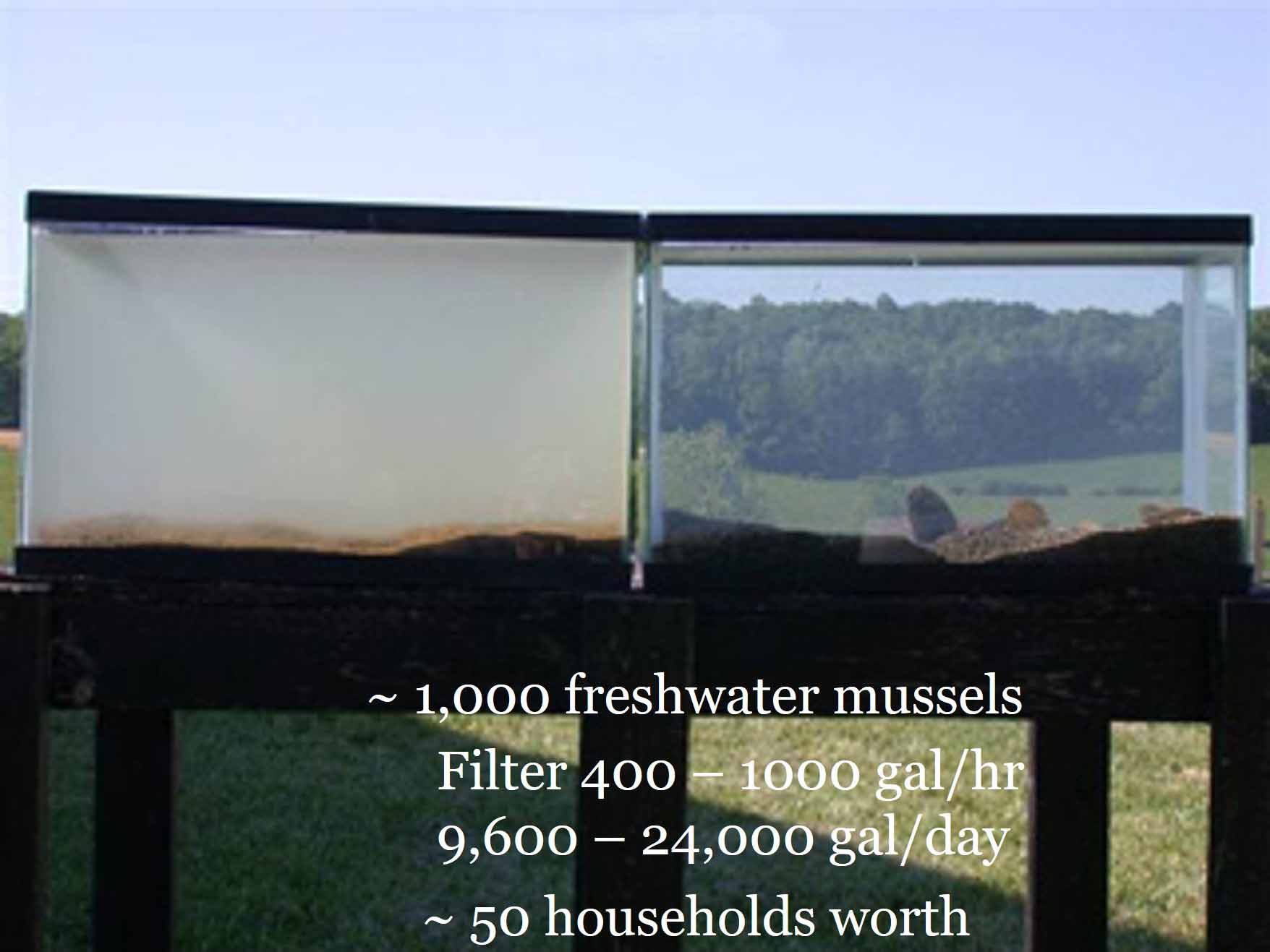 What are uses people have found for freshwater mussels?

People have a long history of benefiting from mussels. Native Americans used mussels as a ready food source, implements for tools, and as jewelry. Before the advent of plastics in the 1930’s, most buttons were made from freshwater mussels. Modern day buttons retain the luster of those found in earlier times. Today, freshwater mussels are a key ingredient in the pearl industry. Mussels are collected in several areas of the United States and their shells are sold to Asian markets. Their shells are used to make numerous round beads that are placed in oysters and serve as the nuclei for freshwater pearls. 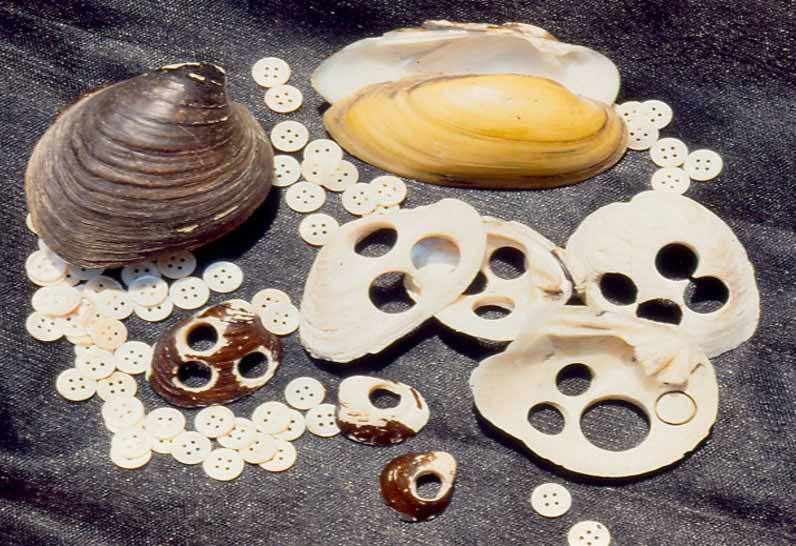 How do mussels reproduce? 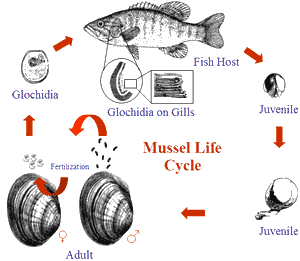 The life cycle of the freshwater mussel is one the most complex and interesting in the animal world. Unlike other animals that can actively search for a mate, the sedentary mussel depends on the river current to reproduce. The process begins with the male releasing sperm, and the female located downstream drawing it in through her incurrent siphon. Numbering in the 100’s to hundreds of thousands, the fertilized eggs develop into glochidia within her gills. Once mature, they are released into the water column to begin the second part of their lives-attaching to the gills, fins, or scales of freshwater fishes. At this point, the process is further complicated because not only do the glochidia have to find a fish, but it has to be one of a few specific fish species for the life cycle to continue. If a glochidium attaches to the correct fish species, it encysts into the fish’s tissue and undergoes a short life as a parasite.

A Largemouth Bass is fooled by a Pocketbook mussel into biting its mantle lure (which mimics a small minnow). Upon striking the lure, thousands of larval mussels spread out from the mussel's protruding water tubes, coming into contact with the fish's gills to get distributed throughout the river bed. Video Credit: Footage was obtained at DWR's Aquatic Wildlife Conservation Center in Marion, VA by AWCC staff and Videographers Brett Billings and Ryan Hagerty of USFWS NCTC.

Over several weeks, it begins to develop gills, a foot, and other internal structures to become a juvenile mussel. The now fully transformed, but still microscopic, juvenile will drop off the fish and begin its life on the stream bottom. Unbeknownst to the fish, it has just served as a taxi transporting the young mussel into new habitat away from its’ parent. If the mussel is lucky enough to grow into an adult, it may live 20-100 years or more depending on the species. 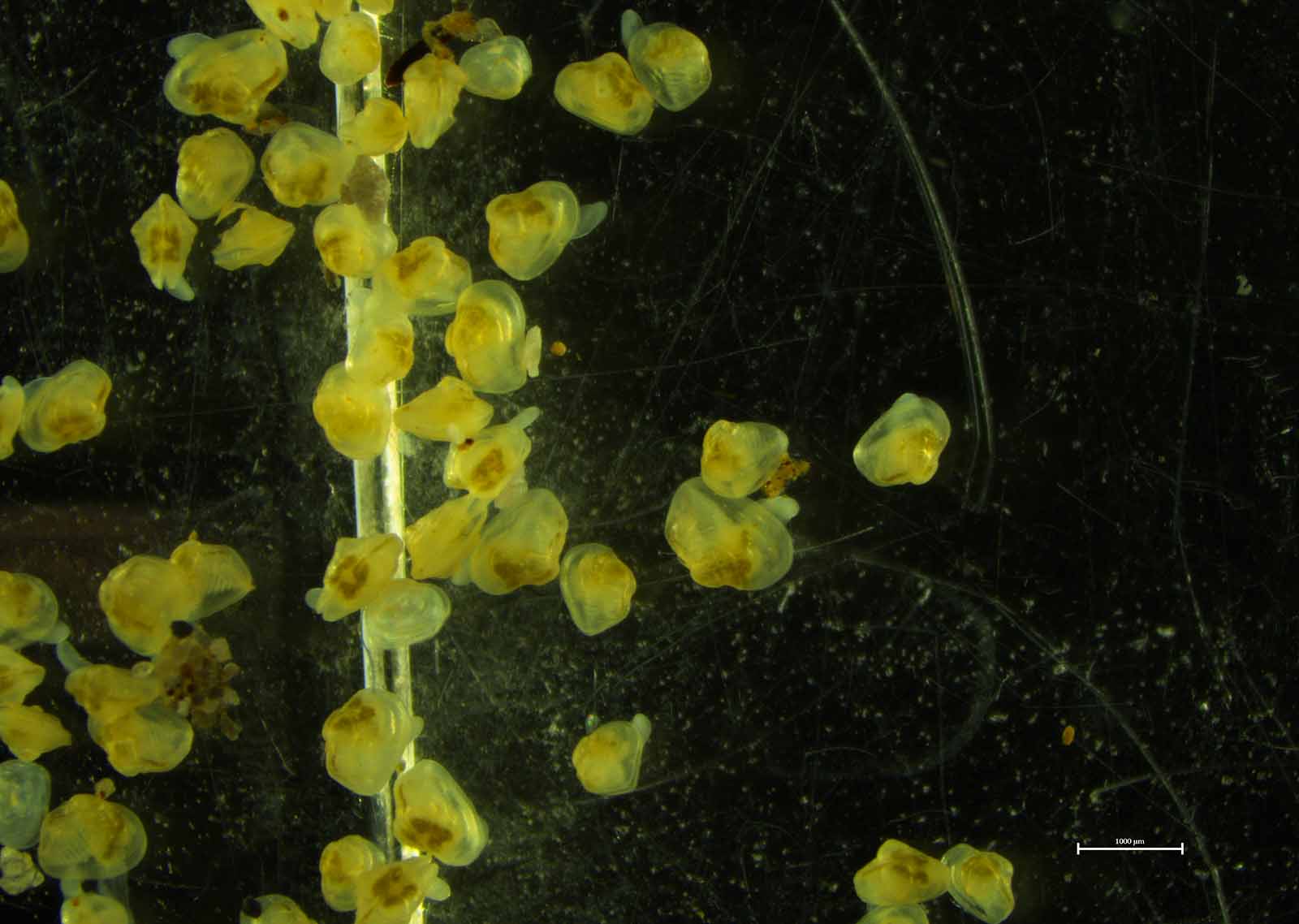 What is the status of freshwater mussels?

When settlers first arrived on these shores, they were astonished to discover rivers practically paved in freshwater mussels. Unfortunately, over the proceeding 400 years, water pollution, dams, and introduction of exotic species has taken its toll on many species. It is estimated that 70 percent of the mussel fauna in the U.S. is in peril. Over seven percent have gone extinct, and another 50 percent are receiving special protection under the U.S. Endangered Species Act. The situation does not get much better for Virginia. Of the 82 species in the Commonwealth, only 30 percent are considered stable with the remaining in decline. In Virginia’s Tennessee River drainage, 31 species are listed as either state or federally threatened and endangered. 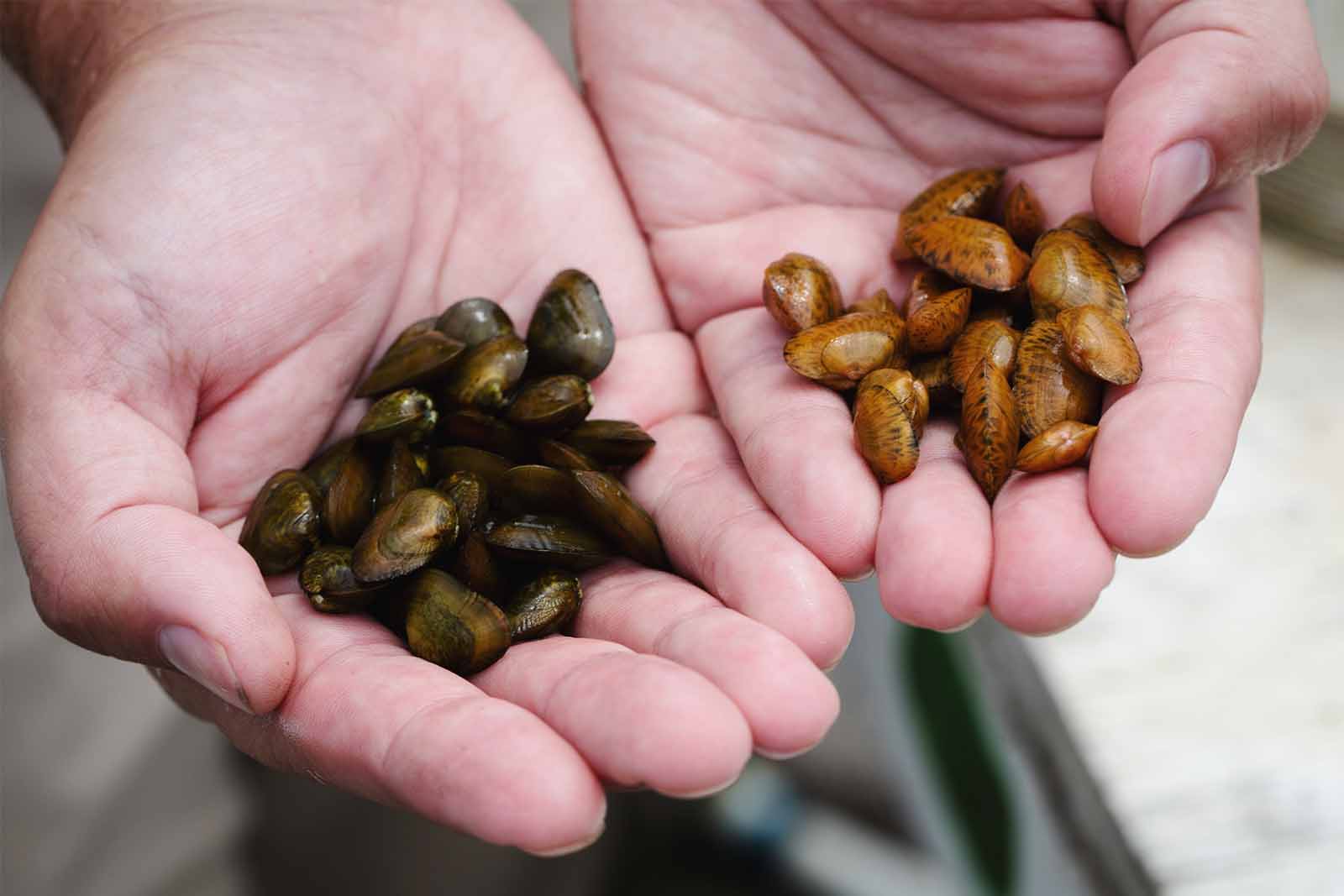 Learn What DWR is Doing to Recover Freshwater Mussels