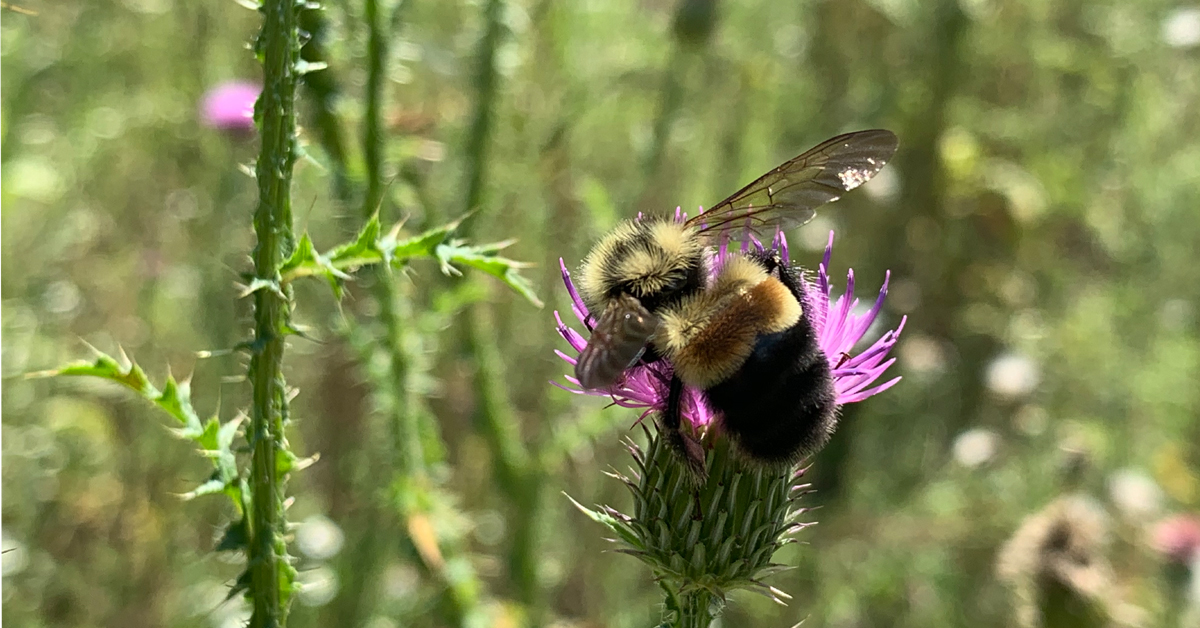 One of the rusty patched bumble bees spotted at the Highland Wildlife Management Area.

Virginia has more than 900 species of wildlife whose numbers are in decline mostly because of impacts to their habitat—natural areas that provide necessary food, water, and shelter. DWR is the lead agency in Virginia for the conservation of wildlife and wildlife habitat. The Restore the Wild initiative allows DWR to expand the work the agency does to preserve, establish, and maintain vital wildlife habitat areas and keep Virginia’s wild places wild. Memberships and donations to Restore the Wild, along with revenue raised with the Run for the Wild virtual 5K run/walk, provide funds for DWR habitat projects.

The first year of Restore the Wild raised more than $25,000 in membership funds, donations, and Run for the Wild registrations. The funds will go immediately to support DWR habitat work throughout the state, directly benefiting habitat for not only the rusty patched bumble bee and last year’s Restore the Wild focal species, the red-cockaded woodpecker, but also for many other species of wildlife. Five of the funded projects aim to improve pollinator habitat at DWR Wildlife Management Areas (WMAs). The nature of this work improves habitat conditions for the rusty patched bumble bee, one of the priority actions listed in the USFWS’s Draft Recovery Plan for the bee, and other important pollinators. DWR also offers education and outreach on pollinator habitat. 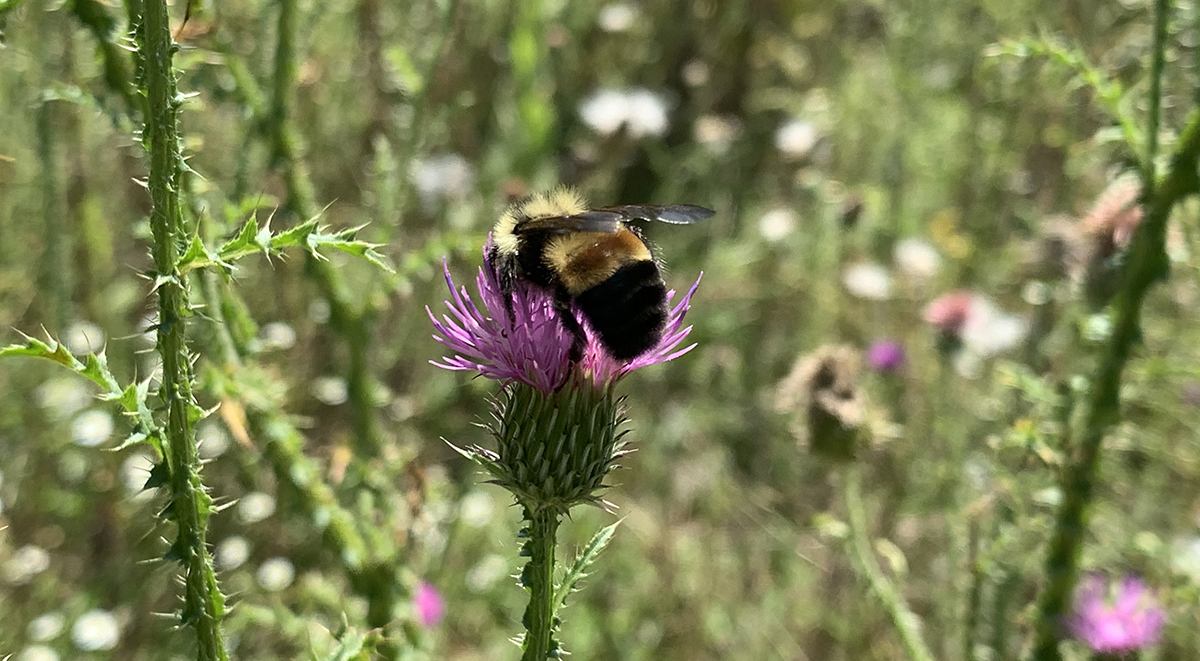 Thanks to the Restore the Wild contributions, six habitat projects have been approved and funded for more than 180 acres of DWR land. DWR Lands and Access staff from across the state submitted project proposals to Restore the Wild, highlighting how their work would positively benefit wildlife and particular species of concern. Restore the Wild funds have enabled DWR staff to create more acreage of dedicated pollinator and wildlife habitat that not only supports wildlife, but also provides viewing and educational opportunities for the public.

The rusty patched bumble bee has been found present in the Hupman Valley tract and the Jack Mountain tract at the Highland WMA in Highland County. A recent survey identified eight rusty patched bumble bees on the Jack Mountain tract. Both tracts have been managed by DWR with prescribed fire and herbicide application to reduce cool season grasses and foster native forbs. 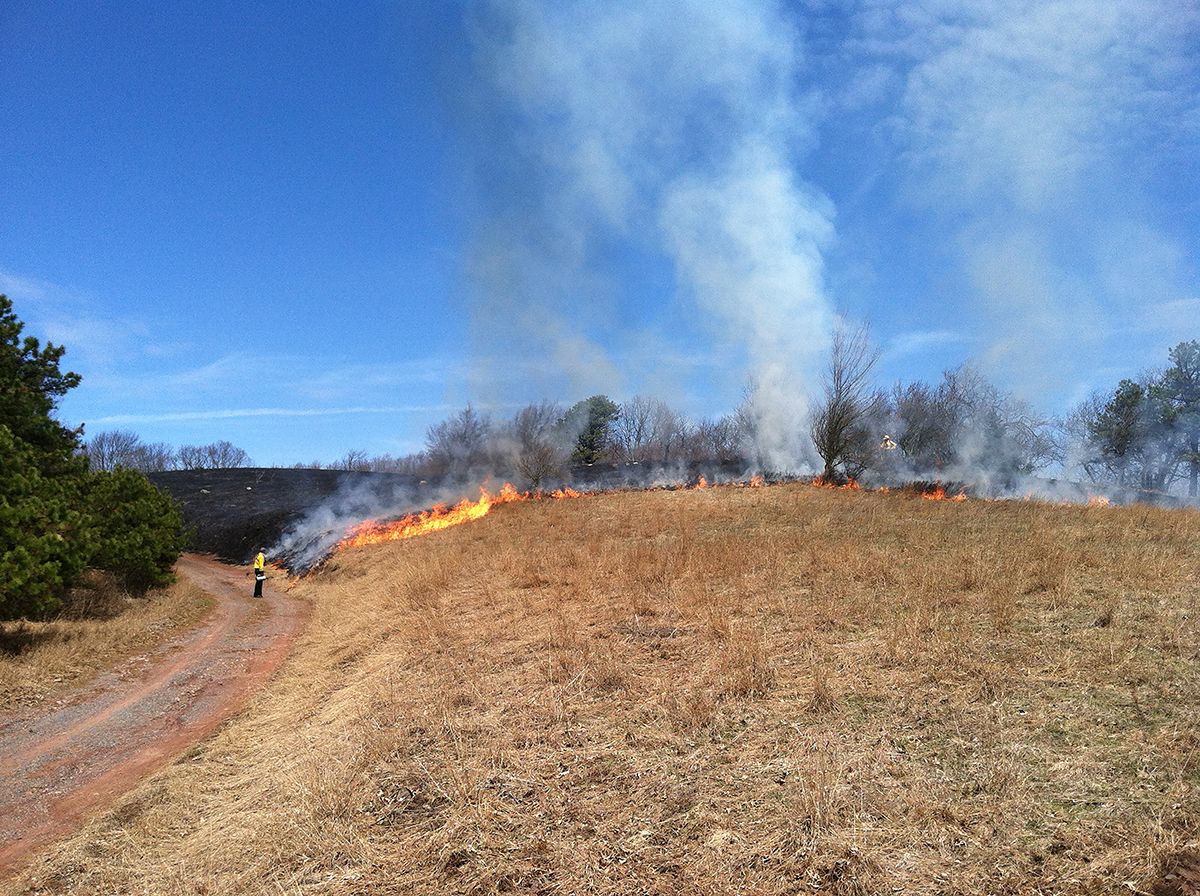 Prescribed fire at the Highland WMA. Photo by Meghan Marchetti/DWR

The Princess Anne WMA in Virginia Beach hosts a wide variety of migratory birds as well as many species that call the area home year-round. The coastal location of this WMA attracts breeding and migratory monarch butterflies. This project would enhance two areas of the WMA,

On an existing impoundment, site work would clear 8 acres of land for pollinator-mix planting, allowing early successional upland habitat to develop and providing habitat diversity to the WMA. Another 7 acres of existing impoundments have become overgrown. Clearing the vegetation will help create habitat for a variety of waterfowl and other wetland-dependent species. 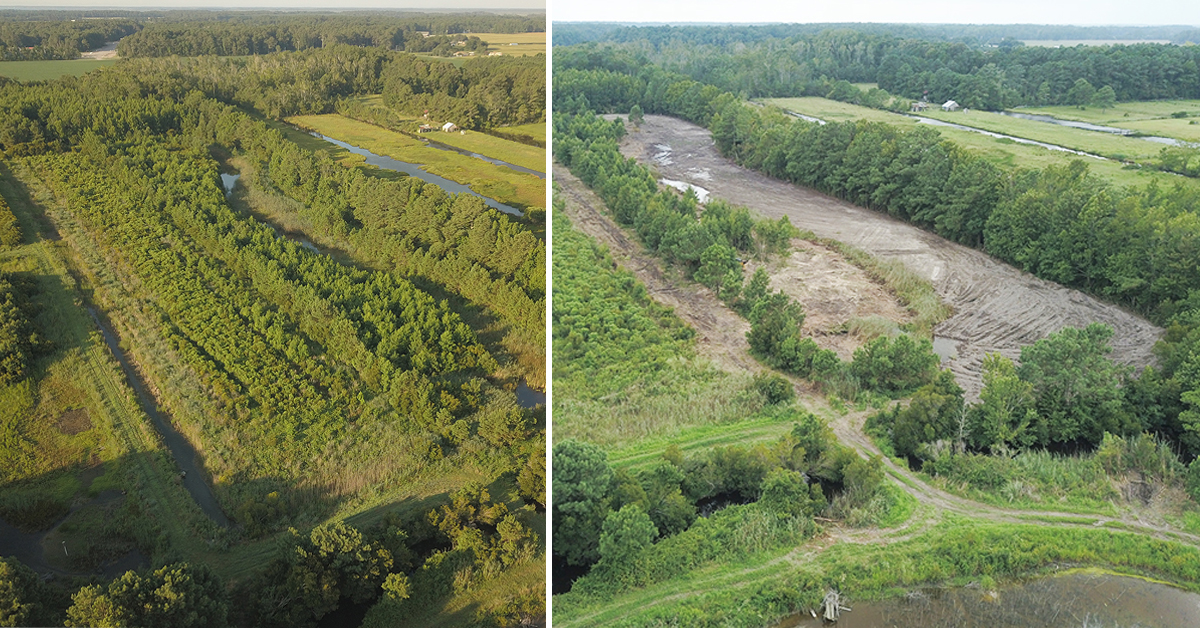 Restore the Wild-funded habitat work for a pollinator meadow is already underway at the Princess Anne WMA. Before photo on left, after on the right. Photo by Evan Shearer/DWR

Lands and Access staff in Region 3 identified a one-acre lot in the Hidden Valley WMA located on both sides of the road to the primary fishing and boating access area as a location for a native pollinator habitat. Hidden Valley WMA is on Clinch Mountain in Washington and Russell counties and this project will improve foraging habitat for pollinator species and species dependent upon pollinators as prey, including 14 state and federally threatened or endangered species that occur at or near the site. 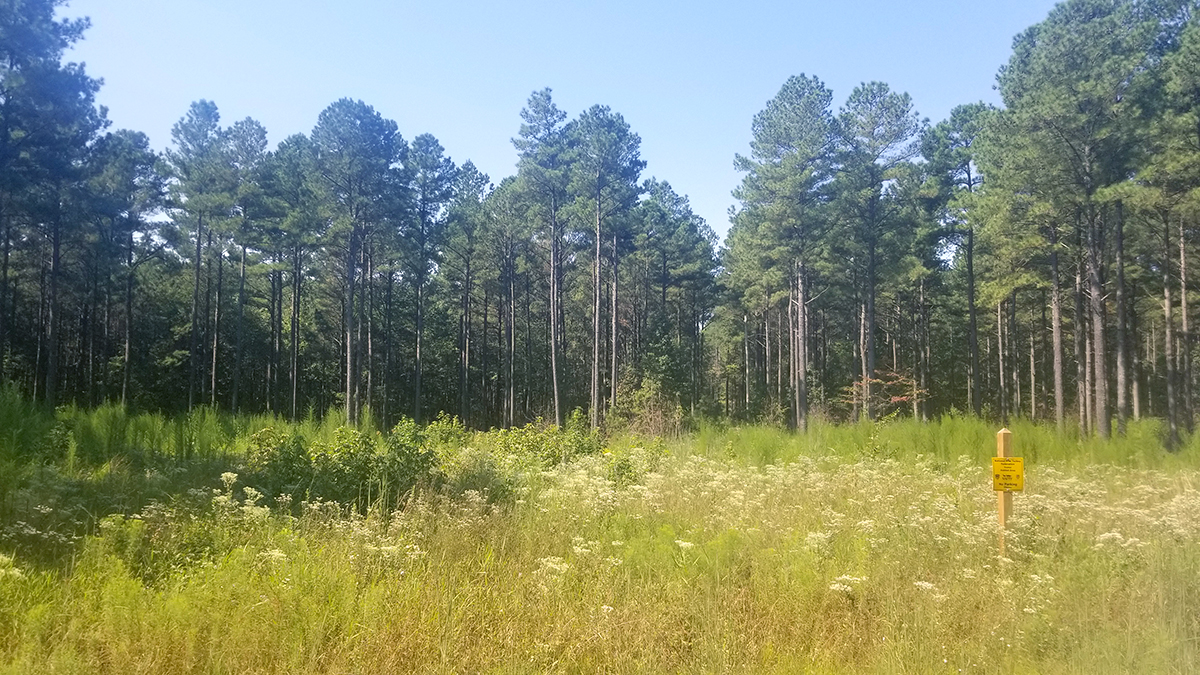 One of the proposed meadows at Big Woods WMA. Photo by Matt Kline/DWR

The judicious application of understory herbicides to approximately 135 acres of heavily thinned pines on Big Woods WMA within the red-cockaded woodpecker management unit will reduce or eliminate understory competing species like sweetgum, red maple, vaccinium, and others. The removal of understory helps in the development of a true pine savanna and the kind of open understory favored by red-cockaded woodpeckers and many other species. The project also will seed native shade tolerant pollinator seed on fire lines throughout Big Woods WMA. 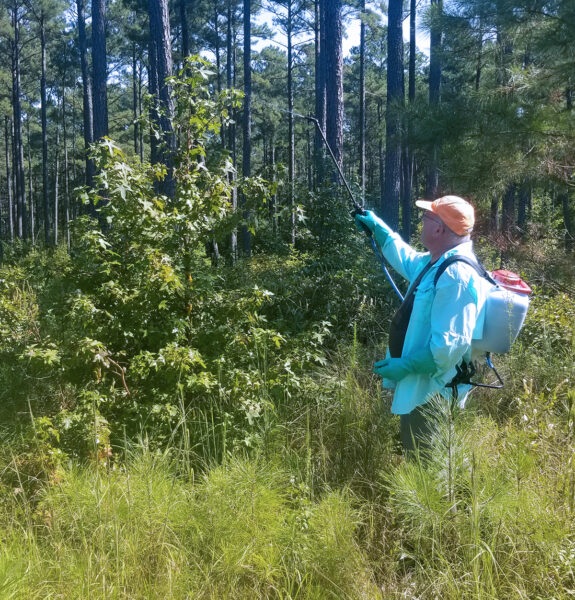 This project will re-establish 15 acres of diverse, native pollinator habitat on the Davenport Tract of the G. Richard Thompson WMA in Clarke and Fauquier counties by recapturing and adding to a previously existing native meadow that had become overgrown. The habitat will benefit not only pollinator species but also small mammal and bird species. The project area borders Sky Meadows State Park, where the rusty-patched bumblebee was found in 2014.

An existing pollinator habitat has proven quite effective and popular for constituents, so expansion of the area at Vic Thomas Fish Hatchery will double the area, adding wildlife-friendly native shrubs to a hillside and additional pollinator plantings to open, grassy areas for an additional 5 acres of habitat. The areas have proven to draw attention and visits from constituents and educational signage is already in place.

The rusty patched bumble bee (Bombus affinus), the first bumble bee to be listed as an endangered species in the United States, is the species of focus for the 2020 Restore the Wild initiative. Once common to the Eastern U.S., Midwest, and part of Southeastern Canada, this bumble bee has declined over the last 20 years from an estimated 87% of its historic range. In Virginia, the bee historically ranged throughout most of the Commonwealth’s mountain region and western piedmont, extending into the center of the state and the Northern Neck, but now remains in just five Virginia counties.  In January of 2017, the U.S. Fish and Wildlife Service (USFWS) listed the Rusty Patched Bumble Bee as an endangered species under the Endangered Species Act.

Find out more about DWR’s Restore the Wild initiative and consider becoming a member or making a donation to help restore and maintain essential habitat for Virginia’s wildlife.