Life Span: Colonies are seasonal with an annual cycle of April - October

Habitat: Habitats are primarily grasslands and tallgrass prairies, but this habitat generalist also lives in woodlands and pastures, particularly in Virginia. These ground-nesting bees typically nest in abandoned rodent cavities, 1-4 feet below ground, or occasionally in clumps of grasses above ground. Hibernating queens overwinter in undisturbed soil, a few inches below the surface.

Distribution: Currently ranges through 13 scattered Eastern and Upper Midwest states in the U.S. and 1 Southeastern Canadian province. In Virginia, it is only found in the counties of Fauquier, Augusta, Bath, Highland and Rockingham, representing a fraction of its historic distribution in the Commonwealth. 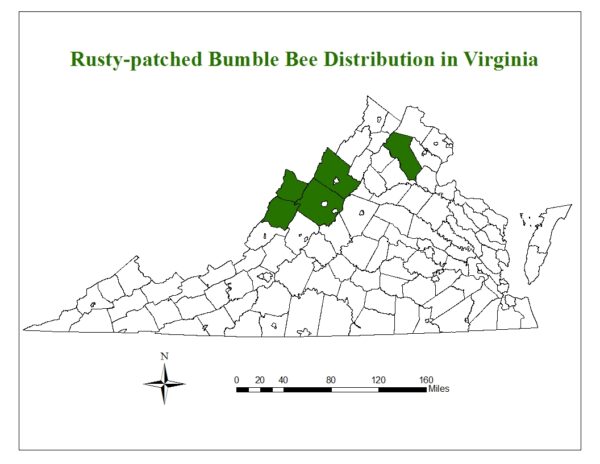 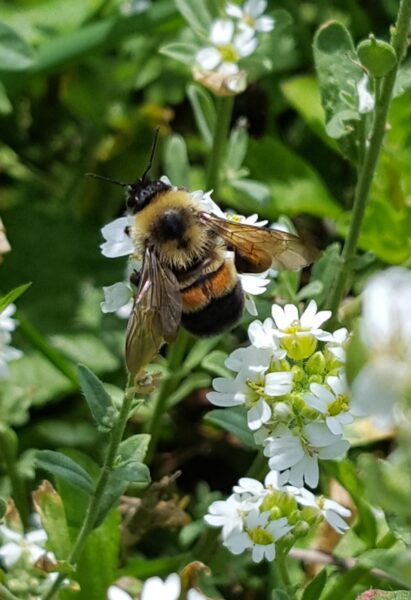 The bee gets its name for the distinctive rust-colored patch on its rear body segment (called the abdomen). This rusty patch is located on the center of its second abdominal segment, which is yellow. The patch is only found on the males and female workers. The queens do not have the rusty patch, making their identification much more difficult. (Please do not seek out the queens. It’s best to leave them be.)

All Rusty Patched Bumble Bees have solid black heads and a patch of black hair on top of their head. Additionally, a hairy black band stretches between each wing.

The largest bee in the colony is the queen, followed by the males, and the smallest are the female workers.

Within their Virginia range, the most similar-looking and easily confused bee with male and female worker Rusty Patched Bumble Bees is the Brown-belted Bumble Bee (B. griseocollis). The Brown-belted is also one of the three most common bumble bees in this region, so it is far more likely to spot a Brown-belted than a Rusty Patched. To distinguish the two, look closely at the abdomen (rear) of the bee. 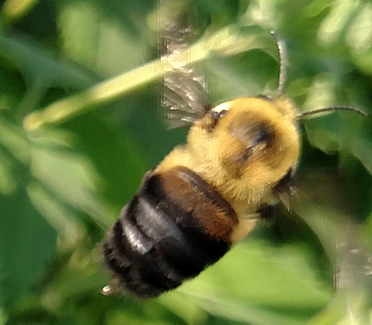 In the spring, queens emerge from their underground hibernation. They initiate a colony by seeking a nest site, collecting nectar and pollen from flowers, and laying eggs. From these first eggs, hatch the workers. Workers build the colony; they collect food, care for young, and defend the colony. Meanwhile, the queens stay in their nests and continue laying eggs. Towards the end of summer, these eggs begin hatching males and new queens. The males leave the colony to mate with queens from other colonies. In the fall, the entire colony dies, except for the new queens; they remain as as the sole survivors. These new queens hibernate over winter and the cycle begins again in the spring.

Bumble bees are very effective pollinators, making them a keystone species. They play a critical role in maintaining our food supply and keeping our ecosystems healthy. They are essential to native wildflower reproduction and the growth of seeds and fruits that feed a diversity of wildlife, from birds to bears.

Bumble bees are particularly important pollinators because they are “buzz pollinators,” a pollination process in which the bee vibrates its flight muscles while clasping a flower, dislodging pollen that is difficult to access. This process can make them a more effective pollinator of certain plants than other bees, such as honeybees, that do not buzz pollinate. It also is what makes them highly efficient pollinators for many crops. They are vital to tomatoes (one of the only insects that can pollinate them) as well as cranberries, blueberries, plums, apples, peppers, and alfalfa. 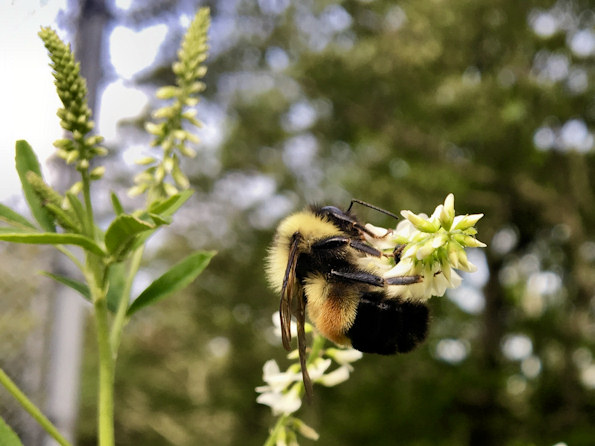 Rusty Patched Bumble Bees are currently only known to five counties in Virginia: Fauquier, Augusta, Bath, Highland and Rockingham. The later four, more western counties, have a slightly greater abundance, making them your best bets for finding the bee. However, even within those counties, their populations are extremely low, making it very rare to spot them.

To increase your chances of finding a Rusty Patched Bumble Bee, search for them in July, which is the best time of year to spot one in Virginia.

To view other bumble bee species, check out the DWR’s pollinator projects at the public lands described in the Conservation section below. 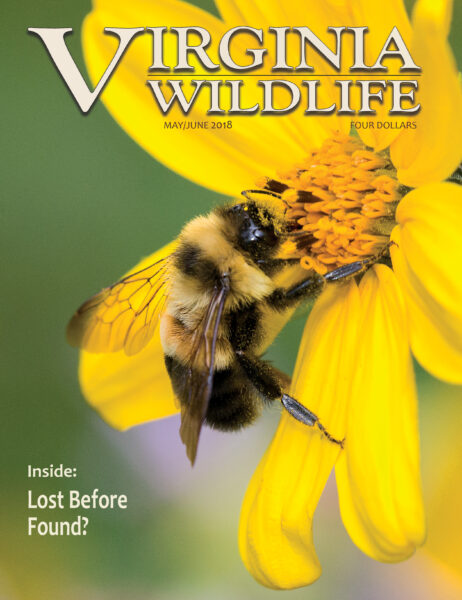 The Rusty Patched Bumble Bee is the first-ever bumble bee to be listed as an endangered species in the United States. Once common to the Eastern US, Midwest, and part of Southeastern Canada, this bumble bee has declined over the last twenty years from an estimated 87% of its historic range. In Virginia, the bee historically ranged throughout most of the Commonwealth’s mountain region and western piedmont, extending into the center of the state and the Northern Neck, but now remains in just five counties.  In January of 2017, the U.S. Fish and Wildlife Service (USFWS) listed the Rusty Patched Bumble Bee as an endangered species under the Endangered Species Act.

One of the biggest threats to the bee may be a pathogen called Nosema bombi, a disease that affects reproductive health and fitness of bumble bee colonies, among other issues. Evidence has shown that this disease may have spread into the wild from commercial bee colonies and the increased incidence in the wild follows the timeline of commercialization. Rusty Patched Bumble Bee is one of the few bee species known to have had high incidences of the disease. 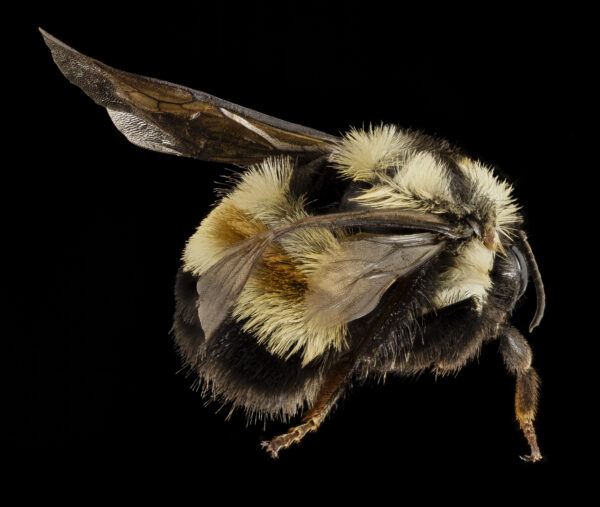 Habitat loss and degradation have also had a particularly negative impact on this and other bee species. Most of the prairies and grasslands in the bee’s historic range have been lost to urban and agricultural development, leaving the remaining grasslands isolated and small. Intense farming practices further the harm to bumble bees from their increased use of pesticides and low to no plant diversity.

Climate change challenges native wild bees with weather extremes, early snow melts, and late frosts. Bumble bee spring emergence may also become out of sync with the blooming of spring flowers. Additionally, historical data shows that bumble bee ranges are contracting, and their populations are moving north and also up to higher elevations.

Since listing Rusty Patched Bumble Bee as a federally endangered species, the USFWS developed a draft recovery plan for the bee in 2019, which contains a list of actions to address these threats, stop the bee’s decline, and prevent its extinction.

In Virginia, the lead state agency for federally endangered insects, such as the Rusty Patched Bumble Bee, is the Department of Agriculture and Consumer Services (VDACS). VDACS has been working with the Department of Conservation and Recreation’s Natural Heritage Program on the inventory and documentation efforts for the Rusty Patched Bumble Bee. Since beginning those surveys in 2018, the Natural Heritage program has documented four new occurrences of the bee in Virginia.

What the DWR Has Done/ Is Doing

DWR is the lead agency in Virginia for the conservation of wildlife and wildlife habitat. This includes conservation for any insects that are not listed as federally or state threatened/ endangered, making DWR responsible for the majority of Virginia’s pollinator species. Therefore, we have been working on improving pollinator habitat at our Wildlife Management Areas and Lakes and on private lands throughout the state. The nature of this work improves habitat conditions for the Rusty Patched Bumble Bee, one of the priority actions listed in the USFWS’s Draft Recovery Plan for the bee. DWR also offers education and outreach on pollinator habitat. 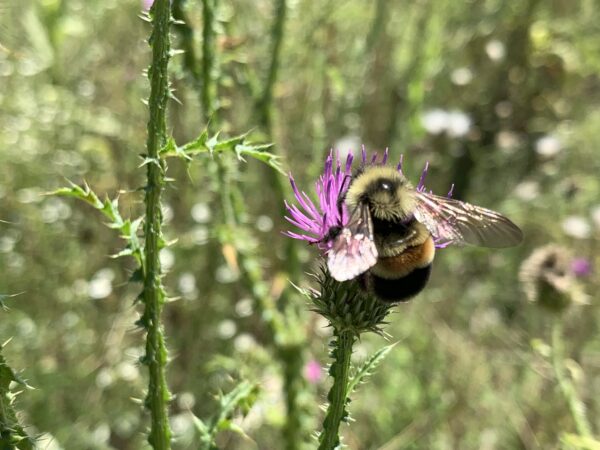 Education and Outreach on Pollinator Habitat 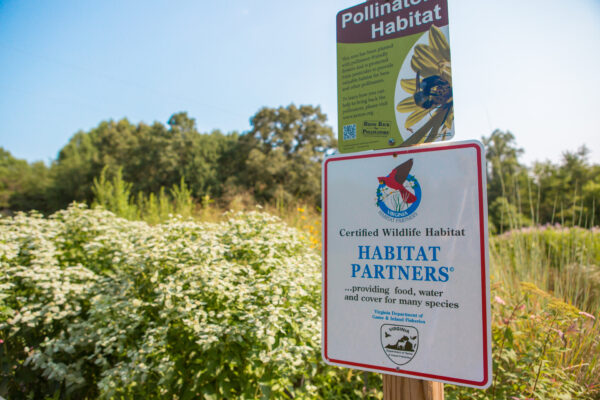