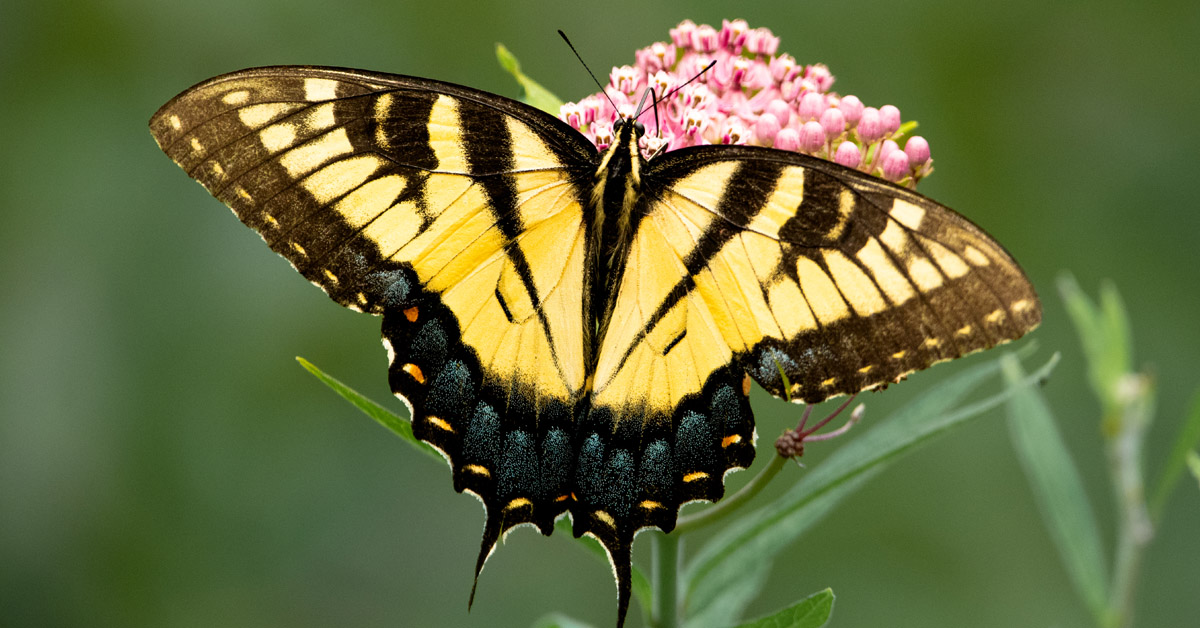 A swallowtail butterfly photographed at the Amelia WMA. Photo by Wade Monroe

I recently had the pleasure of exploring the Heart of the Piedmont loop in the Piedmont Region of the Virginia Bird & Wildlife Trail. Over the course of the year, as I have ventured all over the state, I have been surprised at my newfound love for the Virginia Department of Wildlife Resources’ (DWR) Wildlife Management Areas (WMAs). Previously, I was not very familiar with the WMAs of Virginia, and spent most of my time exploring the outdoors—whether that be for photography or hiking—at National Wildlife Refuges. From my experiences so far this year, I can confidently say that WMAs are vastly underrated. So, in August, I made sure to visit as many as I could.

Located just southwest of central Virginia and Richmond, the Heart of the Piedmont loop offers a variety of environments and houses 10 different sites, with a range of appeal including important historical sites. While this loop does not contain any huge areas like the Great Dismal Swamp, which I had visited earlier this year, most sites along the loop are of a size that you could easily spend a whole day exploring them. If you are up for a small adventure, I would recommend camping at a WMA and making time to experience dawn and dusk if you can, as they are truly beautiful locations. A word of warning however, while exploring Briery Creek WMA I came across evidence of black bear more than once, so be sure to take the necessary precautions when exploring!

As summer is slowly ending, my hope was to photograph pollinators doing what they do best. My first stop on my trip was to Amelia WMA. When I first stepped out of my car, I knew I would have success finding pollinators, as I was immediately greeted with the boisterous sound of thousands of bees buzzing from flower to flower. Amelia WMA is host to a plethora of species of all types. The rolling hardwood and pine forests are home to red-tailed and red-shouldered hawks, barred owls, turkey, and several woodpecker species. Along the waterways at the site were evidence of many beavers, and possibly otters, though I was unsuccessful at locating any. The WMA also has several open fields filled with flowering scrub brush that attracts pollinators by the thousands.

Throughout these open areas I saw more species of butterfly than I could name, though I’ve now learned so many of the names. Present were the classic monarch, the viceroy (virtually identical to the monarch other than a small black band on the lower wing), black swallowtail, common buckeye, spicebush swallowtail, spring azure (one of my favorites), and many more that I am sure to have missed. Bees were also well represented at Amelia with numerous species I was able to identify present. Among them were bumblebees, western honeybees, digger bees, and mason bees. 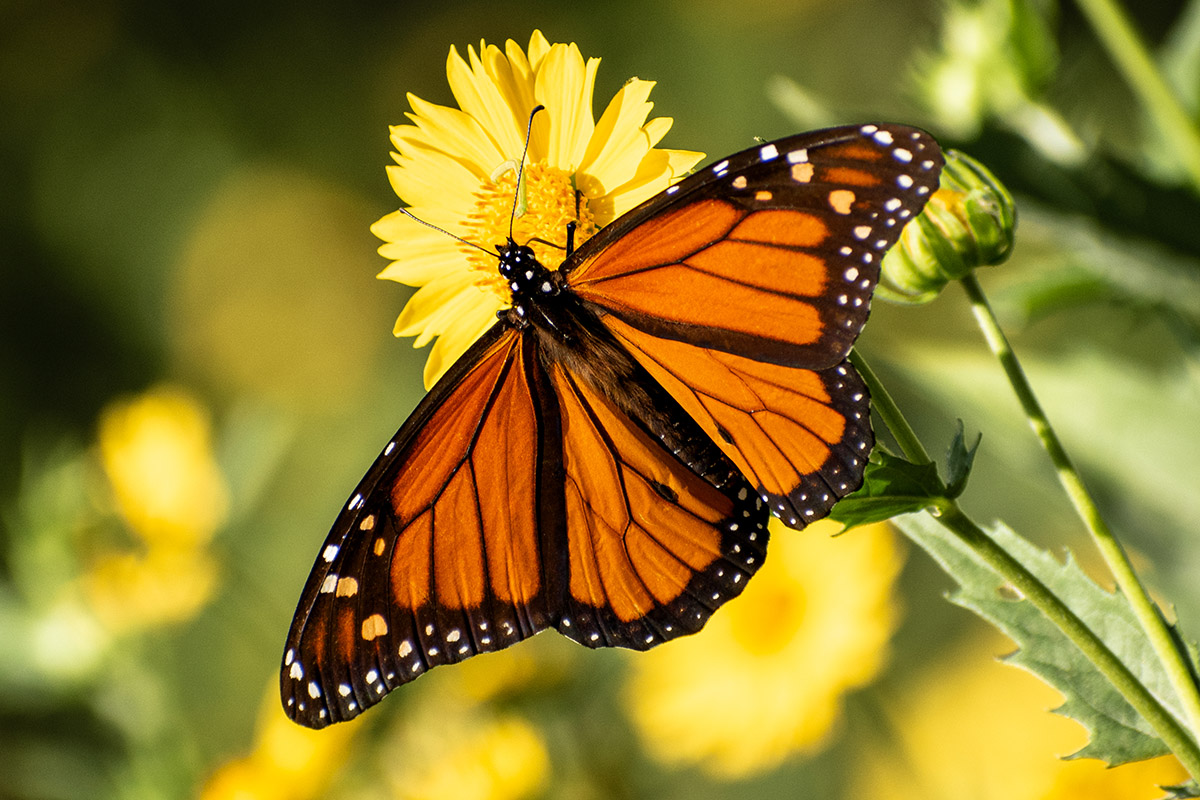 A monarch spotted at Amelia WMA. Photo by Wade Monroe

After spending most of a day at Amelia it was time to move to my next stop, only a few miles away: Powhatan WMA.

Powhatan WMA is effectively two sites, as it is cut in half by a portion of interstate. The southern portion is much more densely forested and has multiple small ponds with beaver lodges that appear to be quite active! The wetlands area of the southern portion is your best bet for viewing wading birds, flycatchers, and other water loving species. The northern portion is much more open, very similar to the scrub-brush areas of Amelia WMA, and is the home of many more birds of prey than Amelia boasted. The two areas host many of the same species and you would be hard pressed to go wrong with a visit to either, though I will admit I seemed to have much better luck at Amelia and found the site a little easier to navigate simply due to the number of access roads it maintained.

I continued my trip south towards my final stop at Briery Creek but made sure to visit Sailor’s Creek Battlefield State Park, which lies between Briery Creek and Powhatan. This site hosts many of the same species as the previous sites I have mentioned, however the primary interest of this park is due to the historical weight it carries. On April 6, 1865, one of the most decisive final battles of the Civil War took place here. Almost a quarter of the Confederate Army was destroyed in the battle, solidifying victory for the Union and forcing the surrender of General Lee 72 hours later at Appomattox Courthouse.

Finally, my journey ended with a day spent at Briery Creek WMA. Briery Creek was my favorite location I visited this month even though I only explored a small portion of the area, due to the thickness of the undergrowth vegetation throughout most of the site. Located around Briery Creek Lake, it is a perfect spot for a kayaking or fishing trip. I am already planning my next trip to the area so that I can kayak the lake and explore the more remote areas you simply cannot reach on foot.

The lake at Briery Creek WMA. Photo by Meghan Marchetti/DWR

The lake is simply picturesque, surrounded by rolling hills and huge trees, and I knew as soon as I got to the lake that I would have success seeing wildlife. In my exploration of the site, I came across several signs of more elusive animals: bobcats, black bear, and river otters. With plenty of open water the lake makes fantastic a birdwatching location as well. While hiking the lakeside I saw osprey, bald eagles, multiple species of waterfowl, herons, turkey, and a species I have been trying to capture on film for years: hummingbirds.

As dusk approached, I decided to head to the edge of the lake near the mouth of a remote creek tributary that I know river otters frequent. Luckily, right next to the edge of the water was a huge patch of cardinal flowers which pollinators, hummingbirds specifically, love to feed from. I waited for the better portion of an hour, watching the flowers, and eventually my hope of this chance encounter started to wane, so I turned to focus on the lake and hopefully catch a glimpse of the otters that might be in the area. Thankfully, I was sitting in a quiet enough area, away from the deafening drone of worker bees, that I was able to hear the buzzing of the hummingbird’s wings before I saw it.

I slowly turned around and watched as a female ruby-throated hummingbird visited the flowers to drink their nectar. Even more luckily, I was able to grab some photographs of her as she fed! This is easier said than done, and I was frankly shocked I had pulled off the shot without a tripod and with a subject that refuses to stay still for longer than a half second. While I never did see the otters, this experience was the perfect end to my trip and gifted me a picture I have been trying to capture for years with no success. 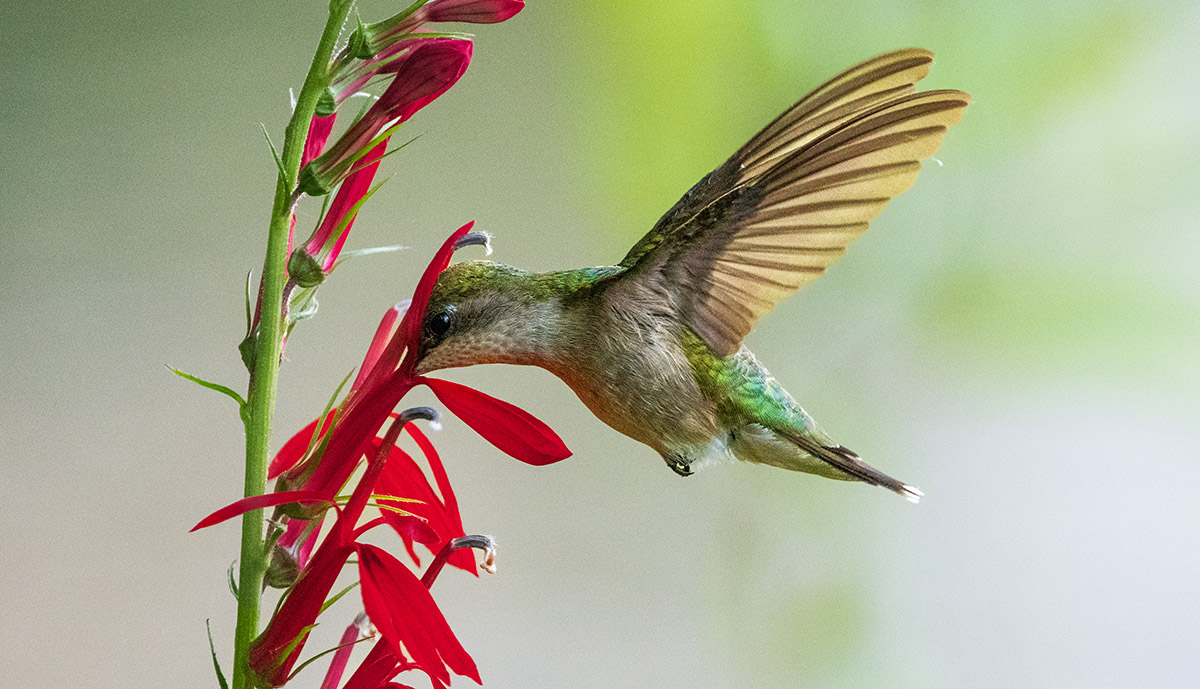 With autumn fast approaching I am so grateful to have visited these areas before frost steals the wildflowers and the animal life starts to slow down in preparation for colder days. As always, I am reminded of how lucky I am to experience nature and wildlife in such a personal way that many do not, but that is why these many of areas I visit were created. They are for everyone to use, so please make use of them, you will not regret it. 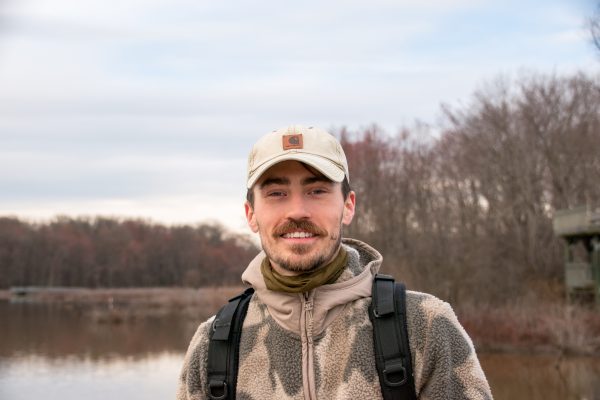