Welcome to 2021 and a new season of the Richmond Falcon Cam! We begin the year with a new nest box, which was custom-built and installed by our biologists in late January.  The former nest box had been in place since 2002 and was heavily weathered and worn. 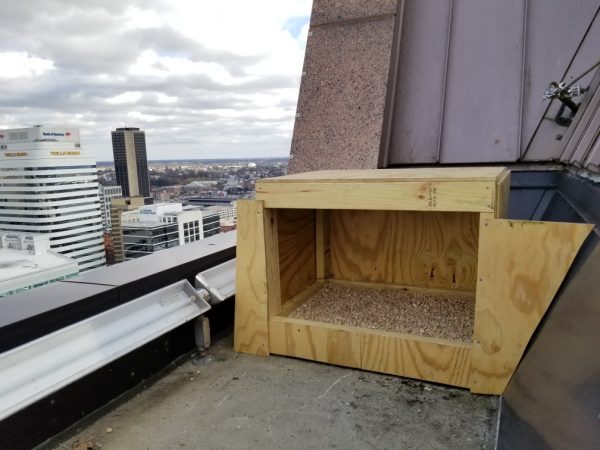 New nest box in place at the ledge.

We are happy to report that last year’s female peregrine falcon (banded 95/AK) has returned to the site for the third year in a row! 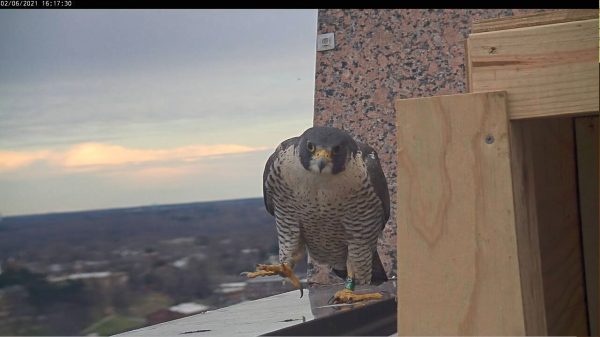 95/AK, the female of the Richmond peregrine falcon pair.

As a reminder, 95/AK is a fourth-year female (hatched in 2018) hailing from the St. George’s Bridge in Delaware. Last year the Richmond Falcon Cam documented her first-ever adult breeding season, where she ousted an unbanded female peregrine from the nesting site and went on to pair with the resident male, banded 24/AU, who is now deceased. This pairing resulted in a clutch of four eggs, and one chick that was ultimately released at Shenandoah National Park after a series of early fledging attempts.

On February 5th, shortly after her first on-camera appearance of 2021, 95/AK was joined at the ledge by a new male who continued to appear regularly on camera in the weeks to follow. So, who is this mysterious new male? 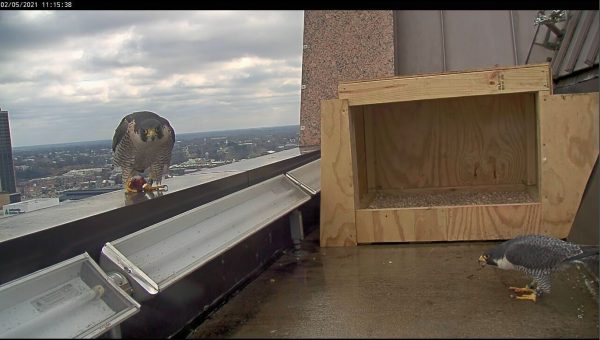 Richmond female (left) with a prey item which was delivered to her by the new male (right).

Based on his bands, we know this new male to be a Virginia falcon that hatched in a nest box on the Yorktown Power Station in 2019, where he was banded on May 8 by the Center for Conservation Biology at the College of William & Mary. And while this is the first year we’ve observed this particular male on camera, his mother is no stranger to the City of Richmond, as she happens to be the same female (70/AV) who nested here in 2017! Dedicated falcon fans may remember her as the last female to nest with the original Richmond male who spent 15 consecutive breeding seasons downtown. The pair raised two chicks to fledging age, but in subsequent years 70/AV moved on to nest in Yorktown.

In addition to the black over green band that reads 59/BM on his left leg, the new male has a green band on his right leg. Although the plumage differences between the male and female are less distinct relative to differences seen in previous pairs, the male can be identified by his smaller size and the green coloration of the right leg band, which is silver on the female. See the FAQ section for more information on distinguishing the male from the female. 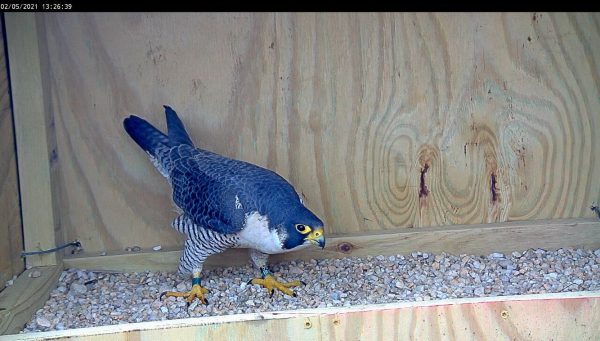 We have observed both birds on camera almost daily since February 5th and in this span of time, have witnessed courtship (or pair-bonding) behaviors including displays of head bowing and the male presenting the female with prey.  Both birds have also been seen working the scrape (a depression in the gravel that serves as the nest). Although the outcome of this pairing ultimately remains unknown, we hope to see the female begin laying eggs in the upcoming weeks.

We invite you to join us and our partners at Comcast Business as we cover the events of this season. And remember, if you want to receive falcon updates directly to your inbox, you can join our subscriber list, here. You can also check out our Richmond Falcon Cam FAQs for additional information and our blog archives to read about the events of previous seasons.

And finally, if you can’t get enough of the falcons, check out the highlight reel below which showcases some of the Cam footage that our biologists captured this year prior to the stream going live!