To report a bear, a hunter must have a customer account through Go Outdoors Virginia. It is free and easy to set up your account. If you have any problems, please call 804-367-1000.

One per license year, at least 100 pounds live weight or 75 pounds dressed weight (all internal organs removed). Females with cubs may not be harvested. Cubs may be 30–50 lbs by fall.

Please observe and be patient before shooting as cubs often lag behind the female.

Unlawful to Feed or Bait Bears

Feeding or baiting prohibited year round and statewide. Do your part to keep bears wild, reduce human-bear conflicts, and slow the spread of mange. Bears with mange will have hair loss, dry and scaly skin, and sometimes look thin or starving (see page 32).

Unlawful to Shoot Without Intent to Retrieve the Bear

No person shall kill or cripple and knowingly allow any game animal to be wasted without making a reasonable effort to retrieve the animal and retain it in their possession.

Unlawful to Cripple, Harm, or Dislodge and Continue to Hunt

It is unlawful to cripple, harm or dislodge a bear from a tree for the intent of continuing a hunt, chase, or for the purpose of training dogs.

Successful bear hunters must report their harvest through the internet at GoOutdoorsVirginia.com, via the Go Outdoors Virginia mobile app, or by telephone and also submit a bear tooth.

Look Up the Age of Your Harvested Bear Online!

The age of your harvested bear will be available online 9 to 10 months after the hunting season ends at the DWR website..

Special restrictions apply to archery tackle use during this season. See Legal Use of Firearms and Archery Tackle for more details.

November 12 through 18: Statewide in all areas where hunting with a muzzleloading rifle is permitted.

Special restrictions apply to specific firearms use during this season. See Legal Use of Firearms and Archery Tackle and Local Firearms Ordinances for more details.

In the cities of Chesapeake, Suffolk, and Virginia Beach.

In the counties of Accomack and Northampton.

Bears may be harvested using any lawful weapon within the incorporated limits of any town or city that allows bear hunting from October 1 through January 7. This season will not supersede local ordinances with respect to hunting or use of weapon.

Special restrictions apply to specific firearms use during this season. See Legal Use of Firearms and Archery Tackle and Local Firearms Ordinances for more details.

Dogs May Not Be Used to Hunt Bears NO BLACK BEAR MAY BE TAKEN DURING THIS SEASON.

4:00 a.m. to 10:00 p.m., including Sundays. See maps and information below for dates, locations, and other restrictions.

Same for hunting seasons where bears can be taken. See licenses, stamps, and permits section for appropriate required licenses.

Information for Hunters Regarding Black Bears with Mange 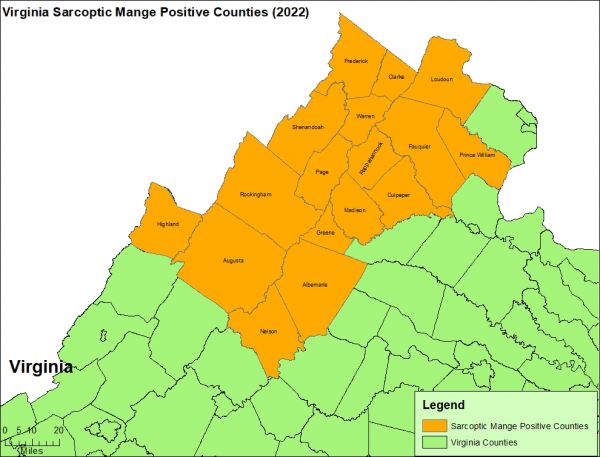 Sarcoptic mange is a highly contagious skin disease of mammals caused by mites. It is the most common agent isolated in severely affected black bears. S. scabiiei has a wide host range that includes dogs, foxes, coyotes, horses, cows, cats, and numerous other domestic and wildlife species. Humans are susceptible to S. scabiiei infestation but most infections are mild and do not require treatment.

Hunters should carefully evaluate bears before harvest and refrain from harvesting bears that show any signs of mange. Determining if a bear has mange can be difficult in the field, especially because other conditions can appear similar to mange, such as normal shedding. The DWR mange brochure (see below) contains photos of bears with mange along with additional characteristics to look for to help in your assessment. Research and experience in other states show that many bears with mild to moderate cases can survive and clear symptoms of mange. If you have any doubts, please refrain from harvesting the bear; instead, take photos, note your exact location (take GPS coordinates, if possible) and submit this information to the Virginia Wildlife Conflict Helpline at vawildlifeconflict@usda.gov or (1-855-571-9003).

Best Management Practices for Possible Exposure to a Mange-Infested Bear