Moratorium on Possession of River Herring

It is now illegal for any person fishing this river to have river herring in their possession – this includes blueback herring and alewife. All river herring inadvertently caught by anglers must be immediately released back into the water.

The North Landing River winds its way from the urban settings of Hampton Roads down through tree-lined wetlands into North Carolina’s Currituck Sound. The river is part of the Intra-coastal Waterway, an essential segment for boat traffic up and down the east coast. Many pleasure boaters travel the river from the New England states in the spring down to Florida for the summer and then back north again in the fall.

Local anglers know this river as a great place to get away from the hustle and bustle of the Hampton Roads “rat-race” without having to travel hours from home. The river is known for having a diverse fishery; from sunfish species to the anadromous striped bass and American shad, any angler can find something to pursue all year long. There are several boat ramps on the mainstem or in the tributary creeks that will give you access to the entire river. Check out our map for more details.

Because the North Landing lays completely below the fall line, it does not have rapids or fast water like most other Virginia rivers. That means you can’t just float downstream with the current from one put-in to another-you have to do a little work (which really isn’t such a bad thing). An advantage with canoeing this river is you don’t have to take two vehicles or paddle upriver fighting the current to get back where you started. Pick one of the public boat ramps, or canoe access sites shown on the map, paddle or motor around all you want, upstream or downstream, and return to where you started. No shuttling of vehicles is required! One thing to remember- since upstream and downstream are not always that obvious (wind tides can actually push water upriver), there’s some chance of getting disoriented, particularly if you go exploring back in the marshes and swamps.

The river has extensive marshes around it with several small tributary streams, particularly along the western shore. This gives the canoeist plenty of water to explore away from big boats on the river. The river can be somewhat salty at times, particularly when southerly breezes push water upriver from the Sound. West Neck Creek, one of the larger tributaries, also can be salty due to a manmade canal connecting it to the Lynnhaven River to the north. West shore tributaries are typically less salty.

Much of the land surrounding the North Landing River is owned by the Nature Conservancy and protected from development. Wildlife is plentiful in this area, particularly deer, so bring your binoculars. Certainly you’ll get to see a wide variety of birds, and yes snakes. The river is home to cottonmouths and canebrake rattlesnakes, so exercise caution. There are plenty of harmless water snakes as well, so don’t get too upset if you see a snake on the water. Contrary to popular belief, not all snakes around water are water moccasins. The canebrake rattlesnake, a state endangered species, is fairly rare and terrestrial, so there’s little likelihood of encountering one on the rivers.

Whether you want to chase after largemouth bass, striped bass or just canoe the back waters, the North Landing River has something for you. A short drive from the downtown Chesapeake, Norfolk or Virginia Beach, will take you to a world away. Come explore this treasure close to home. 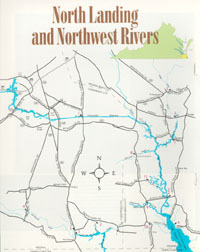 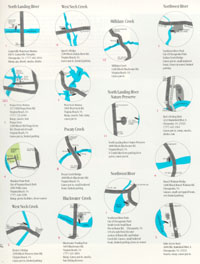 Several access sites are located along Indian Creek Road off of Battlefield Boulevard South. Northwest River Park has canoe rental sand offers access to the river. Rented canoes are launched in the park lake and can be paddled 1.5 miles through the park canals towards the river. Canoes must then be carried a few hundred years from the lake to the river. There are no boat ramps on the river in the park, but along Indian Creek Road; at each end of the park are access sites to Northwest River tributaries. The Indian Creek Bridge, on the west edge of the park, has limited parking, but small trailered boats can be launched here, and canoes. This is a popular launch site for small boats. Indian Creek(Map) is fairly large and offers plenty of good angling for sunfish. On the eastern boundary of the park, the Smith CreekMap
Chesapeake

Boat ramps on the Northwest River are located at Bob’s Fishing Hole and the Little Arrow Store, both in the 4000 block of South Battlefield Boulevard. This is where many of the bass boats are launched on the river. Canoes can be launched here as well. Snacks, drinks, bait, etc. are available.

Further upstream on the river, this bridge crossing provides access for canoes or small “car-topper” boats, but parking is very limited.

North Landing River Access
There are several marinas on the North Landing River and its tributaries which provide access for boaters. Located far upstream on the Intracoastal Waterway, Centerville Turnpike, Chesapeake, (757) 482-1834 offers a ramp for larger boats, gas, diesel, snacks and drinks.

West Neck Marina(Map) at 3985 West Neck Road in Virginia Beach has a boat ramp, snacks and bait. Canoes can be launched here as well.

The Blackwater Trading Post on Blackwater Road is, of course, next to Blackwater Creek. The creek is well named. Much like the Northwest River, The water is dark, draining from swampy areas. Bluegill and pumpkinseed sunfish are the most common species here. The store has snacks, baits and sells fishing licenses. There’s a canoe put-in as well as a boat ramp. There’s plenty of water to explore upstream and downstream from the bridge. This is one of the larger tributaries of the North Landing River.

There’s a parking lot here, but it’s a half-mile hike down to the water to launch a canoe. If you’re up to the hike, there’s plenty of water to explore in one of the rivers larger tributaries.

This City Park, far down Princess Anne Road towards North Carolina, has a wide paved ramp, picnic facilities, restrooms, etc. The river is at its widest here and the Intracoastal Waterway passes by the park. Water skiing is popular in this area as well, so there are some larger boats. For those unable to launch along Blackwater Road, crossing the river from Munden Point provides access to several of the western shore tributaries. The park closes at sunset.

Anglers will find a wide variety of freshwater and brackish fish in North Landing and Northwest Rivers. Common fish in the rivers include largemouth bass, bluegill, pumpkinseed, yellow perch, white perch, and white catfish. White catfish and white perch are more abundant in the main river, whereas bass and sunfish are more common in the tributaries. On the western shore, the Pocaty and Blackwater Creeks are good tributary streams for largemouth bass, bluegill, and pumpkinseed. On the east side, West Neck Creek is also a favorite hotspot for anglers. Both of these streams produce some big bass. Anglers on the North Landing River can also enjoy the resurgence of the striped bass along the Atlantic Coast. While trophy stripers are rare, smaller stripers (up to 10 pounds) have become fairly common in recent years at certain locations and time of the year.

White perch and yellow perch can be caught early in the year with citation-sized yellow perch common in the Northwest River. Largemouth bass can be caught using standard bass fishing techniques beginning in the spring and all throughout the summer months. Striped bass can be caught nearly year-round; however, the fall and winter months are the peak season. Buck tailed jigs and minnow imitating baits are your best bet to land a striper. Shad and herring run up into the river in the spring in search of suitable spawning areas.

Boaters be cautious when traveling or fishing along the intra-coastal waterway. Large pleasure boats commonly pass along this route throwing wakes which could be hazardous to boaters in small watercraft. One note for fishermen and boaters, the swing bridge at Mt. Pleasant Road opens on the hour and on the half-hour so time your trips accordingly.

Please see Float Trips/Ramps under Maps for information on facilities.

Please contact the VDGIF Chesapeake Office for more information on the North Landing and Northwest Rivers.