A number of bat species are declining throughout the world for various reasons. Some fruit bats in the tropics are harvested for food and fetch a high price in restaurants. The bigger fruit bats are cooked in a mixture of coconut milk, water, spices, and onions and eaten whole! In the United States, a number of species are listed as threatened or endangered due to disturbance at hibernacula and maternity sites, loss of habitat, and pesticides. In Virginia, we have three species (Indiana bat, gray bat, and Virginia big-eared bat) that are listed as Federally Endangered and one species (Rafinesque’s big-eared bat) listed as State Endangered. The Indiana, gray, and Virginia big-eared bats are cave bats that have been listed mostly due to disturbance at their hibernacula. Rafinesque’s big-eared bat is state listed as endangered due to their low numbers and loss of habitat.

With increasing demand for renewable energy, development of wind energy facilities has grown considerably in the United States. Unfortunately, significant numbers of bat fatalities have been documented at several major wind facilities. These fatality rates have raised concern among scientists regarding the cumulative effect of operating large numbers of turbines over their 20–30 year life spans. On a positive note, subsequent research has revealed that the vast majority of fatalities occur at low wind speeds during the bats’ migration period. This provides wind facilities an effective mechanism to significantly reduce fatality rates by curtailing turbine operations during nighttime hours under certain seasonal and weather conditions. 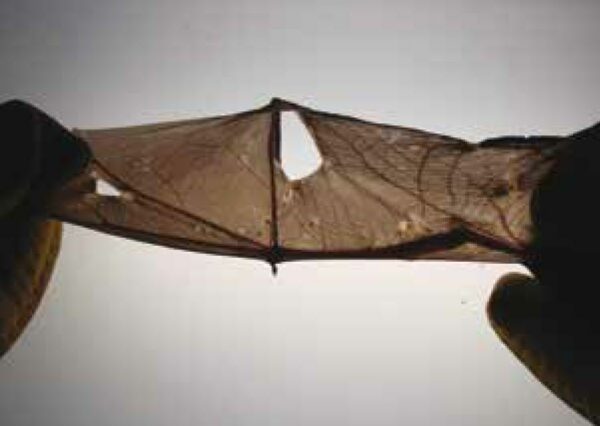 A newly discovered fungus, Pseudogymnoascus destructans, has been associated with an emerging disease, white-nose syndrome, which has already killed an estimated 5 to 6 million bats in eastern North America. The disease is named after the white fungus that is often detected on the muzzles (noses) of infected bats. This psychrophilic (cold-loving) fungus grows best at temperatures below 70°F with ideal growing conditions found in hibernacula. It’s uncertain how the disease kills the bats, but bats with WNS exhibit wing damage that affects body fluid levels leading to dehydration. The loss of fluids and irritation of the fungal growth cause bats to arouse more often during hibernation, adding to the loss of precious body fat needed to survive the winter. At many hibernacula in the northeast, fatality rates exceed 90 percent. At Virginia hibernacula where WNS has been present for three years or more, little brown bats have declined by over 98 percent and tri-colored bats have declined by over 90 percent. As of winter 2015, the fungus has spread south to Louisiana, north to Ontario and Quebec, Canada, and west to Missouri and Arkansas. With the expanded movement, we are seeing great reductions in bat numbers, raising the likelihood of extirpation of local and regional populations, with some suggesting possible species extinctions. Research is underway to better understand and monitor this disease with the ultimate objective of controlling or eliminating it.

Several agencies and organizations in Virginia are very active in the research, management, and conservation of bats. One of the main management activities in Virginia has been the protection of hibernacula and maternity sites through gating of cave entrances. The gating of caves keeps people from disturbing bats during hibernation and maternity periods by not allowing access to the site. Thick angle iron bars are constructed across the entrance with enough space to allow bats to fly through, but not large enough to allow human access to the cave. 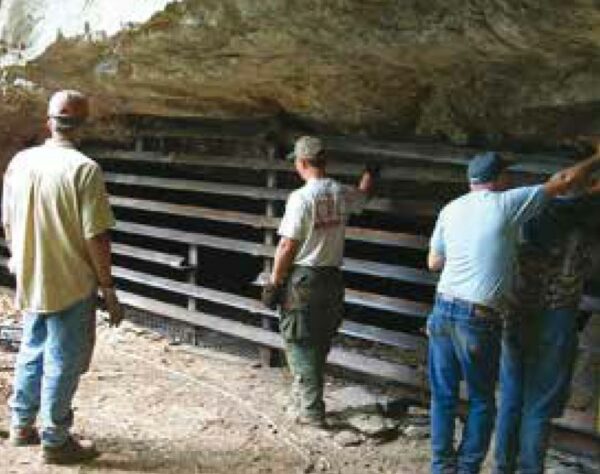 Bats enter hibernation with enough stored fat reserves to carry them through the winter months. During hibernation, bats reduce their body temperature and basically “shut down” their body functions to preserve fat supplies. When bats are disturbed during hibernation, they must raise their body temperature to awake and flee the disturbance, utilizing fat that is essential for their winter survival. During the maternity period, females need large energy reserves to raise their young. Disturbance at maternity sites can cause them to move their young to other sites or to abandon their young altogether. All the major Virginia big-eared bat sites and most of the Indiana and gray bat sites in Virginia have been gated to reduce disturbance, through cooperative efforts of state and federal agencies, nongovernment organizations, local conservation groups, and interested citizens. 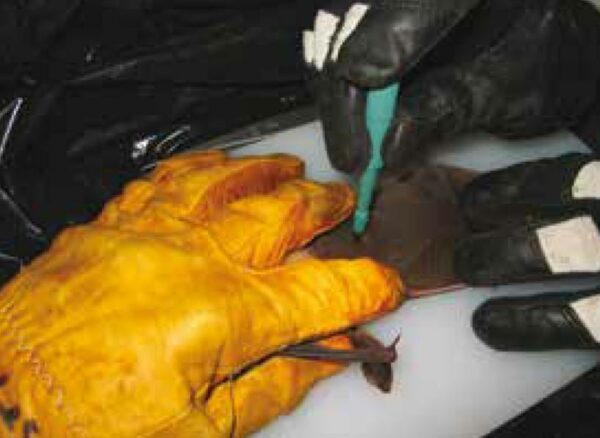 Collecting a wing punch from a Virginia big-eared bat for genetic studies. Photo by Craig Stihler.

To manage and protect any species you must first understand its life history and ecology, including habitat preferences and use, daily and seasonal movements, feeding, reproduction, and both interspecific and intraspecific behavior. This is accomplished through research and, in Virginia, numerous state and federal agencies, universities, and private organizations have contributed to the knowledge of Virginia bats. However, there is still much to be learned about the biology of bats in Virginia and around the world.

Natural resource conservation is a right and responsibility of all Virginians and begins at home. By educating ourselves and living an environmentally friendly lifestyle, each of us can contribute greatly to protection of Virginia’s natural resources.