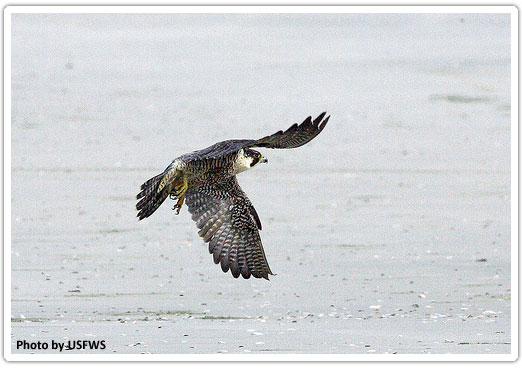 Efforts to restore the peregrine in Virginia began in 1978, when 5 young birds were hacked on Cobb Island in Northampton County. Coastal release sites were initially chosen so that the young birds could disperse in areas not typically inhabited by great horned owls, known to be significant predators of young falcons. It was hoped that the young peregrines would become self-sufficient in the vicinity of the hack site and then wander extensively, returning as breeding adults to natural cliff eyries of western Virginia. Coastal hacking continued until 1985. During this period a total of 115 birds were released from 8 sites. The majority of releases occurred on the Eastern Shore, but some birds were hacked at Back Bay National Wildlife Refuge in Virginia Beach, and others from the roof of a nine-story building in Norfolk. Over 85% of the birds that fledged from the coastal hack sites were reported to have successfully dispersed after hacking.

The hacking effort proved to be very successful in the establishment of coastal breeding pairs, rather than mountain pairs as was hoped. The first pair of peregrines to become naturally established in Virginia in more than 20 years took up residence in 1981 at the hack tower on Wallops Island in Accomack County. Similarly, the first successful nesting occurred in 1982 at Assateague Island. In subsequent years, pairs formed at all of the original hack towers and other suitable sites, including an abandoned shack and a retired ship in the James River reserve or “ghost” fleet. In the late 1980’s, birds began appearing at some of the major bridges on the Coastal Plain, and continue to breed there to this day. As a whole, the coastal falcon population has continued to grow to its present (2010) level of 23 pairs, marking a remarkable comeback for the bird within the state over the past 33 years.

Unfortunately, birds hatched on bridges tend to have low survival rates, due to the tenuous nest sites often chosen. Cross-fostering, brood manipulations, placement of nest boxes and relocation to mountain sites have been used to improve survival at these locations. Additional factors can contribute to chick mortality and depress nest productivity at coastal sites. Despite early belief that the islands would be void of great homed owls, predation and the displacement of adult peregrines by great homed owls became a significant problem in the mid-1990s. Placing owl excluder bars on the nest box openings has reduced but not eliminated this problem. Human disturbance of some nests has also occurred over the years. In addition, environmental contaminants are being investigated for the role they may play in causing eggs to fail to hatch. Analysis of some “addled” eggs has revealed high levels of DDE (a byproduct of DDT) and other contaminants. Although use of such pesticides as DDT has been banned in the U.S., they are still widely used in other countries. The highly migratory behavior of peregrines and many of their prey species continues to expose peregrine falcons to these substances. Chemicals found in synthetic flame retardants used domestically in a wide variety of products, ranging from mattresses to computers, are also being considered as potential sources of hatching failure.