These days, “raptor” is more likely to conjure up an image of a Toronto basketball player or one of those lithe, cunning dinosaurs of Jurassic Park fame, than the birds of prey to which this term more correctly refers. But the real raptors, which collectively include eagles, hawks, kites, harriers, falcons, the osprey, owls and, depending on your source of reference, vultures are every bit as fascinating and worthy of our attention. In fact, a number of raptors have been grabbing local and national headlines of late. The now famous red-tailed hawk, Pale Male, who was evicted from his nest site high atop an upscale New York City apartment, but then allowed to return, now has his own website and is the subject of an award-winning documentary. The Virginian-Pilot recently featured a story about the red-tailed hawks that still call the Virginia Beach Town Center area home, despite all of its recent development. For the last several springs, many Richmonders have been thrilled to watch the progress of a pair of peregrine falcons caring for their offspring via a video camera installed on the McGuire Woods building and eagerly anticipate their return in the coming weeks. 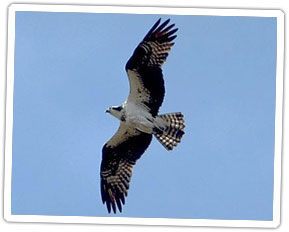 With the exception of vultures, which will be covered separately, raptors share the following features: powerful feet with sharp, curved talons used to capture their prey, a sharp, hooked beak for cutting and tearing meat, and keen eyesight. While owls predominantly hunt at night, all other raptors are diurnal or daytime predators.

While people today enjoy watching hawks and eagles soaring majestically high overhead, it wasn’t all that long ago when raptors were wrongly persecuted as “varmints”. Widespread use of DDT following World War II further decimated populations of many of these top predators. The bald eagle, peregrine falcon and osprey were especially hard-hit. Native to Virginia’s Allegheny and Blue Ridge mountains, the peregrine was extirpated as a state nesting species by the 60s and all were placed on both the federal and Virginia state endangered species list. Following the ban of DDT in 1974, raptor populations began to slowly recover. Osprey have now been de-listed and the bald eagle numbers have increased to the point where it is currently under consideration for federal de-listing from its current threatened status.

As the Commonweath’s wildlife agency, the Virginia Department of Game and Inland Fisheries played a lead role in the restoration and management of peregrines in the state. Beginning in 1978 on the Eastern Shore, state biologists used a method known as “hacking” to re-introduce peregrines. This process involves placing 3-6 month-old chicks into a protective box at a release site. Food is provided daily, but interactions with humans are kept to an absolute minimum. Ten to 15 days later, when the young falcons are able to fly, the box is opened and the birds released. Food is provided until the birds are able to hunt successfully. There are now 17 known breeding pairs in the Hampton Roads and Eastern Shore and another pair has successfully nested in downtown Richmond. Visit the falcon section of our website for more information about peregrines and our FalconTrak program, which allows biologists to track peregrine movement and migration through satellite technology. Peregrines were taken off the federal endangered species list in 1999, but are still protected as a State Threatened species in Virginia. 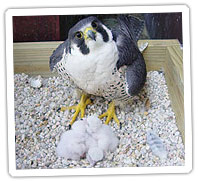 The peregrine is one of two species of falcons that nest in Virginia. The other, the American kestrel, is North America’s smallest raptor. The slightly larger merlin is common winter visitor, especially to the tidewater region. Falcons belong to a different family than that to which most hawks and eagles belong. Their long, pointed wings and long compressed tails are adapted for the high-speed predatory dives. Considered the world’s fastest bird, peregrines can achieve speeds up to 200 mph during a dive. Kestrels can be seen “kiting” or hovering in the air over potential prey. 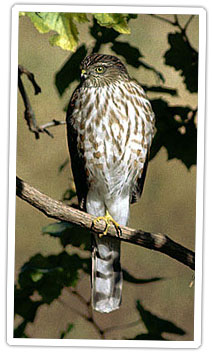 Six species of hawks nest in Virginia: red-tailed, red-shouldered, broad-winged, Cooper’s, sharp-shinned, and the Northern harrier. The red-tailed hawk is perhaps the one with which most people are familiar, as it is commonly seen perched along roads and interstate highways, especially during the winter months. Red-tailed along with red-shouldered and broad-winged, are known as buteo hawks. Buteos typically soar in high circles and have long, broad wings and rounded, fan-like tails. Broad-winged hawks, more commonly seen in the western Piedmont and mountains, are famous and unique among raptors for migrating in large groups known as kettles, with numbers often recorded in the thousands.

Cooper’s and sharp-shinned hawks belong to the group known as accipiter hawks. Similar in overall appearance (Cooper’s are the larger of the two species), they both have short, wide, rounded wings and long, narrow tails. These features allow them to make the quick maneuvers necessary to capture songbirds, their favored prey. If you have spotted a hawk hanging out by your backyard feeder, it was most likely one of these two.

An interesting feature common to most raptors is the fact that females are most often larger and heavier than males. Known as reverse sexual dimorphism, the disparity between the sexes increases as a species’ prey size and speed increases. A harpy eagle female may be twice as large and heavy as its mate! Biologists believe this allows for a greater variety of prey to be captured by mated pairs.

The Northern harrier, formerly known as the marsh hawk, is a low-gliding hawk most easily distinguished by its white rump patch just above the tail. As its former name would imply, it is most commonly seen flying low over our coastal marshes. Continued loss of this habitat, however, has led to declining numbers of this species and it is now on the state’s “species of special concern” list.

Owls are supremely adapted as nocturnal raptors. Their exceptionally large eyes maximize their ability to see in dim light. To match an owl proportionately, our eyes would have to be as big as basketballs! Their soft feathers allow for virtually silent flight. Many species have facial discs that help capture sound and off-center ear openings that allow them to triangulate prey location. Virginia has four species of owls that regularly nest in the state: the great horned, barred, barn, and Eastern screech-owl. In addition, both the short-eared and northern saw-whet owls, common winter residents, have also been known to breed here. Both the barn owl and the northern saw-whet are on the species of special concern list.

One of Virginia’s two vultures, the turkey vulture, unlike most all other birds, has a keen sense of smell, which it uses to locate its food. The other, the black vulture, is not so well endowed, but takes advantage of the turkey vulture’s sharper senses by frequently following it to its next meal.

Vultures have historically been grouped with other raptors on the basis of their overall appearance. Often seen soaring high in the sky, they are often mistaken for hawks or eagles.

However, it has recently been determined that the seven species of New World vultures are more closely related to storks than to the hawks and eagles with which they were originally grouped. Unlike all other raptors, vultures are not birds of prey. They feed solely on carrion, preferring animals that have been dead for two to four days. This certainly explains why they, unlike all other raptors, lack strong, grasping feet and talons. Feeding on carrion has led to a number of other vulture adaptations. Long, broad wings allow for many hours of effortless soaring. The elevated hind toe and blunt talons allow for easier walking. Their bare heads keep otherwise-present feathers from getting dirty and specialized enzymes and bacteria allow them to eat contaminated meat.

Late winter and early spring is an excellent time to be on the look out for raptors in your area. Nesting activities have already begun for the bald eagle and many buteos and owls; falcons, vultures and the osprey will begin in March, and accipiters in April. While some North American raptors over-winter, others, including falcons and accipters, migrate to warmer climates. Many people enjoy heading to Virginia’s well known viewing sites to observe fall migration, especially witnessing the kettles of broad-wing hawks that may number in the thousands. Included among the most popular sites are Snicker’s Gap, west of Leesburg, Rockfish Gap, north of Charlottesville, off of I-64, Harvey’s Knob overlook along the Blue Ridge Parkway north of Roanoke, and Kiptopeke State Park on the Eastern Shore. Raptor migration begins in late August, peaks in late September and continues through mid to late October.

If you’re interested in learning more about raptors, the Raptor Conservancy of Virginia and the Peregrine Fund will provide you with additional information and pictures of both Virginia species as well as raptors from around the world. You can also follow hawk sightings at the Virginia Society of Ornithology by subscribing to the VA-Birds listserv or contacting your local bird club.

Our present-day raptors, and all birds, actually share a direct link to those ferocious velociraptors. Scientists believe that birds most likely evolved from the family of dinosaurs known as theDromaeosaurs around 150 million years ago, the same family that later gave rise to a number of velociraptor species.