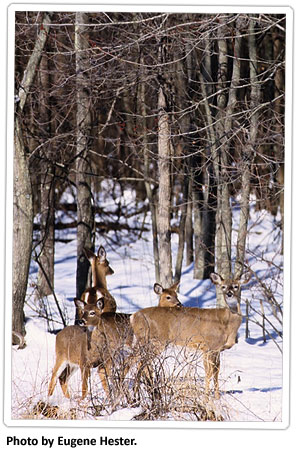 White-tailed deer garner more interest than any other species of wildlife in Virginia. As Virginia’s most popular game species, white-tailed deer provide welcome viewing opportunities but also generate serious damage and public safety concerns. Divergent citizen interests in deer present unique management challenges. Virginia Department of Game and Inland Fisheries (VDGIF), under the direction of a Governor-appointed Board of Directors, is specifically charged by the General Assembly with the management of the state’s wildlife resources.

Deer herds at the time of European settlement (c. 1600) were plentiful and widespread in Virginia. Over-exploitation during the next 300 years nearly extirpated deer by 1900. Since the 1940s, Virginia’s deer herd has demonstrated exponential growth as a result of protective game laws, deer stocking, and habitat restoration. Through the 1980s, the deer management objectives were to restore and to increase populations throughout the state.

Today, deer management objectives have changed to control and stabilize populations over much of Virginia. The change in deer management direction from establishing and allowing deer herd expansion to controlling population growth has been based on cultural carrying capacity – the maximum number of deer that can coexist compatibly with humans. Liberalized hunting regulations enacted over the past decade appear to have stabilized herd growth in most areas. Current computer reconstruction models provide a prehunt population estimate of 850,000-1,000,000 deer in Virginia. Although frequently cited as overpopulated by the press, most of Virginia’s deer herds are managed through regulated hunting at moderate to low population densities, in fair to good physical condition, and below the biological carrying capacity of the habitat.

An optimum population of deer balances positive demands (e.g., recreational hunting and viewing) with negative demands (e.g., agricultural and ornamental plant damage, vehicle collisions, ecosystem impacts). Despite damage caused by deer, Virginia’s white-tailed deer represent a beneficial economic and social resource. In 2011, hunter expenditures in Virginia (by both resident and nonresident hunters) totaled nearly $877 million for all species. Nearly 90% of those who purchase a hunting license in Virginia hunt deer.

The first Virginia Deer Management Plan was completed in 1999 and has been revised twice, during 2005-2006 and 2014-2015. This plan describes the history of the deer management program, its current status (supply and demand), and the future direction or emphases it likely will take. The plan establishes a framework of what needs to be done, how it should be done, and when it should be done. This is a strategic plan (e.g, proposing regulated hunting as the preferred method to control deer populations) and not an operational plan (e.g., establishing specific number of antlerless days of hunting).

It is truer of deer than any other wildlife species that all Virginians have a stake in deer management. To meet diverse citizen demands, VDGIF offers a wide range of deer management programs summarized below.