The Virginia Department of Wildlife Resources (DWR) has confirmed chronic wasting disease (CWD) in a 2.5 year-old male deer legally harvested in southwestern Montgomery County.  It was brought to a taxidermist in late November 2020 and DWR obtained the sample in January as part of the Department’s proactive statewide CWD surveillance efforts.  At the time of harvest, the hunter did not notice any outward signs of disease and the deer appeared to be in good condition.  The deer was harvested more than 160 miles from the closest detection in Madison County.

For up-to-date information on DWR’s response to the 2020 CWD detection in Montgomery County, please view the video presentation entitled Initiation of CWD Monitoring and Management in DMA3.

The DWR conducted extensive CWD testing efforts throughout Floyd, Montgomery, and Pulaski counties during the 2021 – 22 deer hunting season.  Cooperation from area hunters, processors, taxidermists, and VDOT personnel was critical for the success of these efforts.  As of February 28, 2022, the DWR sampled 1,259 deer from these three counties for CWD.  Two hunter-harvested deer were confirmed to be infected with CWD.  One CWD-positive deer was harvested in Montgomery County and the second CWD-positive deer was harvested in Floyd County.  This was the first CWD detection in Floyd County.  Surveillance will continue in the Montgomery County Disease Focus Zone (DFZ) until the last Saturday of March.  See below for additional details on the DFZ.  Hunters that wish to have their deer harvested from within the DFZ tested for CWD may utilize the voluntary CWD tests still in operation (see link below). 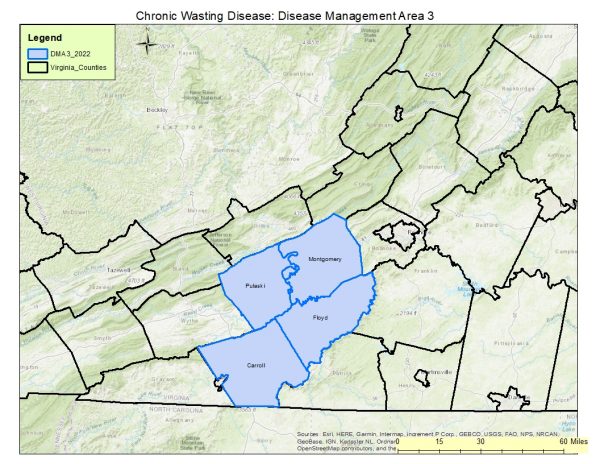 The DWR’s CWD Management Plan guides staff to incorporate any counties located within 10 miles of a CWD detection into a disease management area (DMA).  As a result of the 2020 Montgomery County detection, DMA3 was created and included Floyd, Montgomery, and Pulaski counties for the 2021 – 22 deer hunting season.  The 2021 Floyd detection was located less than 10  miles from Carroll County, therefore, effective immediately , DMA3 now includes Carroll, Floyd, Montgomery, and Pulaski counties.

MANDATORY CWD Sampling will occur in DMA 3 (Carroll, Floyd, Montgomery, and Pulaski counties) on Saturday, November 19, 2022. All deer harvested in DMA 3 on November 19, 2022 should be taken to a DWR staffed sample station (list and map below) or voluntary CWD drop station (list and map linked above). DWR staffed sample stations will be open from 8 AM–7 PM.

Landfill disposal is the recommended option for deer harvested in a Disease Management Area.  Please click here for information on where you can dispose of deer harvested from DMA3. 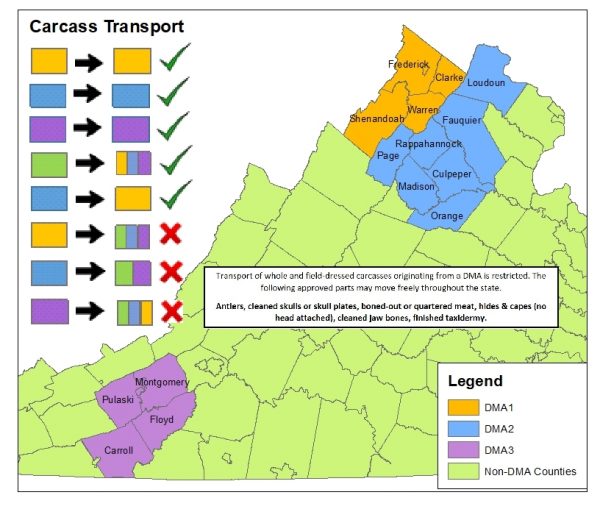 Whole deer carcasses and all carcass parts originating from within DMA3 may be transported anywhere within DMA3. 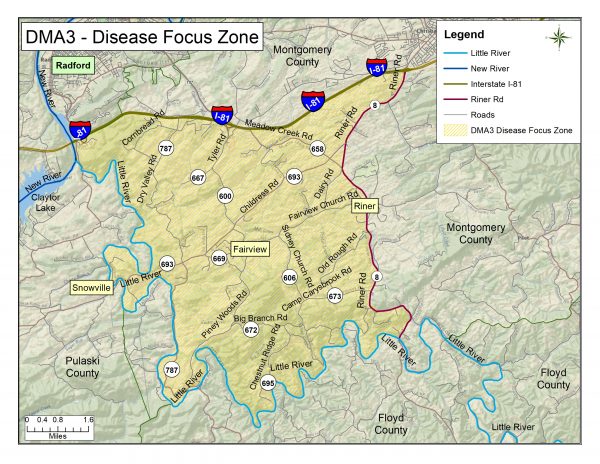 The following hunting regulations will be in effect during the 2022 – 23 deer hunting season.