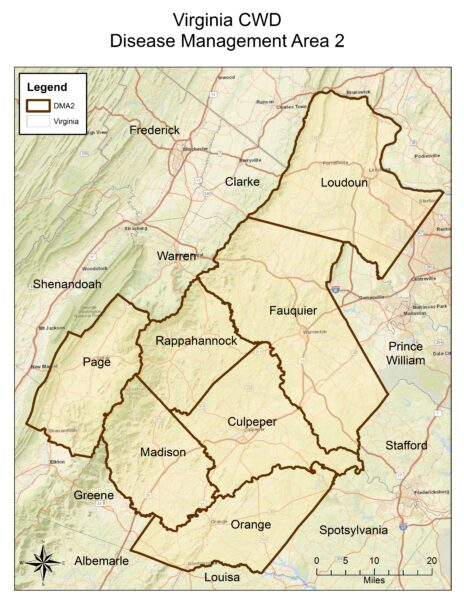 In 2018, DWR confirmed chronic wasting disease (CWD) in a buck legally harvested in Culpeper County. The following hunting season, CWD was detected in a buck harvested in Fauquier County. DMA2 was created in response to these recent CWD detections and includes Culpeper, Fauquier, Loudoun, Madison, Page, Orange, and Rappahannock counties.

If you are hunting in DMA2 this fall, please be aware of the following:

* NEW in 2022* Late (January 8-March 26) antlerless-only general firearms seasons on private lands in Culpeper, Fauquier, Madison, Page, Orange, and Rappahannock counties. Beginning in 2021 an early antlerless-only general firearms season was also initiated for the DMA 2 counties of Culpeper, Fauquier, Madison, Orange, and Rappahannock. The Early season dates for 2022 are (September 3-September 30). The early season was also added to Page County for 2022 (see below).

* Earn a buck is in effect for Culpeper, Fauquier, Loudoun, Madison, Orange, and Rappahannock counties.

MANDATORY CWD Sampling will occur in DMA 2 in Orange and Rappahannock counties only on Saturday, November 19, 2022. All deer harvested in Orange and Rappahannock counties on November 19, 2022 should be taken to a DWR staffed sample station (Orange: Barboursville VFD – 5251 Spotswood Trail, Barboursville and  The Market at Locust Grove –  32301 Constitution Hwy, Locust Grove ; Rappahannock: Amissville VFD – 14711 Lee Hwy, Amissville and The School House – 12018 Lee Hwy, Sperryville) or voluntary CWD testing drop off station (list and map below). DWR staffed sample stations will be open from 8AM-7PM.

Deer heads + 4 inches of neck from a deer harvested at any time during the season in DMA2 may be brought to a CWD deer head drop site for voluntary testing.  Hunting in a DMA does not guarantee that you will harvest a CWD-positive deer but it does make it more likely when compared to hunting elsewhere in Virginia.  The Centers for Disease Prevention and Control recommends that all deer harvested in an area known to be CWD-positive be tested prior to consumption. If you would like to get a deer harvested in DMA2 tested for CWD at any time during the deer hunting season, bring the deer head plus 4 inches of neck to any of the Department CWD  deer head drop sites for free CWD testing.  See the following websites for more details:

Hunting season dates, either-sex days, Earn A Buck requirements, and other deer hunting regulations for counties and cities included in DMA2 can be found in the Hunting & Trapping Regulations section of this website.