HRBT June Update: On the Crèche of Greatness 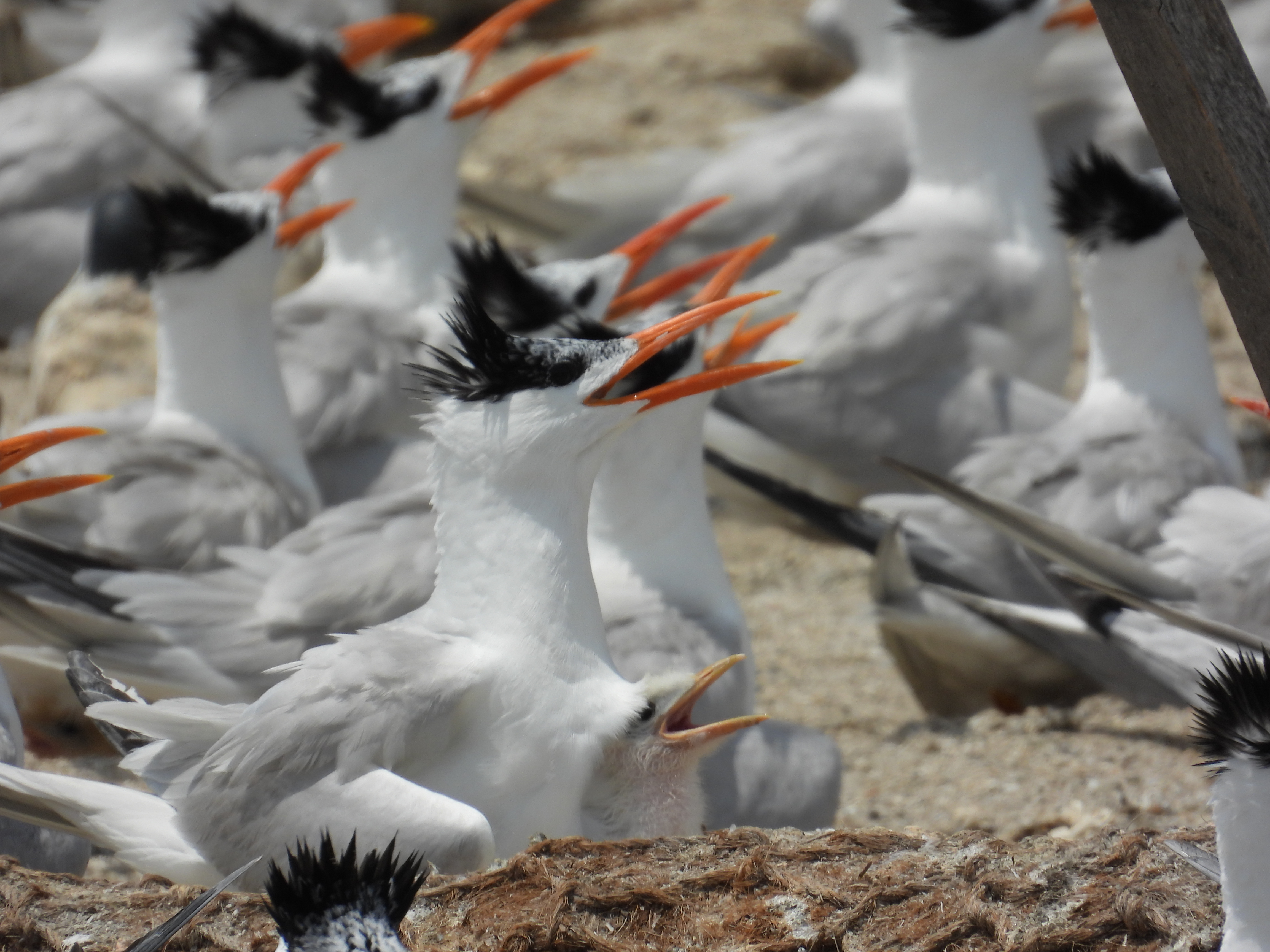 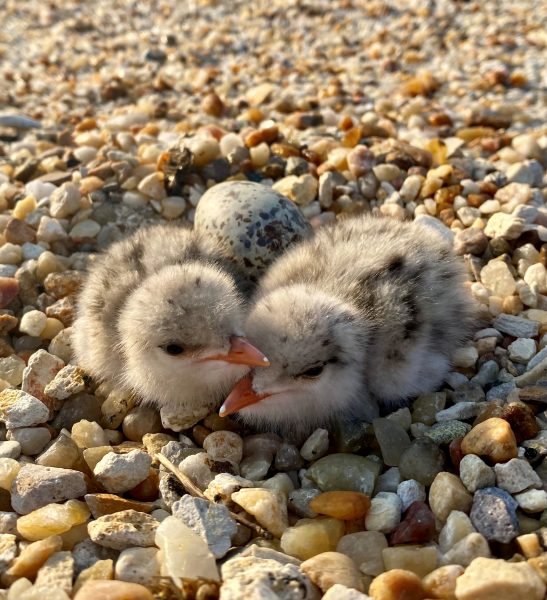 Welcome to the June update in our monthly series spotlighting the Hampton Roads Bridge-Tunnel Seabird Colony! Last month, we gave you an initial report of nesting activity as well as an up close and personal look at the striking eggs produced by our species of interest. Excitingly enough, we’ve had even more nesting occur on site at both Fort Wool and the barges since that last update went out! You may remember that last month’s post contained a report of four gull-billed tern nests, which was a major cause for celebration considering we had only one gull-billed nest last year. Well, I’m very happy to announce that we’ve since documented a total of 15 gull-billed nests atop one of the barges!

We are also happy to report that we’ve had our first hatching events of the season occur within the past several weeks! Chicks were spotted within the royal tern colony on Fort Wool during the first week of June, at which time it was observed that approximately 20% of the nests had hatched. As of this week, we estimate that 80-85% of the royal tern nests have hatched.

The barge colonies, which are made up of common terns, black skimmers, and gull-billed terns, are slightly behind the royal tern and sandwich tern colony, as we observed the first chicks on the barges during the second week of June. Currently, we estimate that roughly 65-70% of nests atop the barges have hatched. 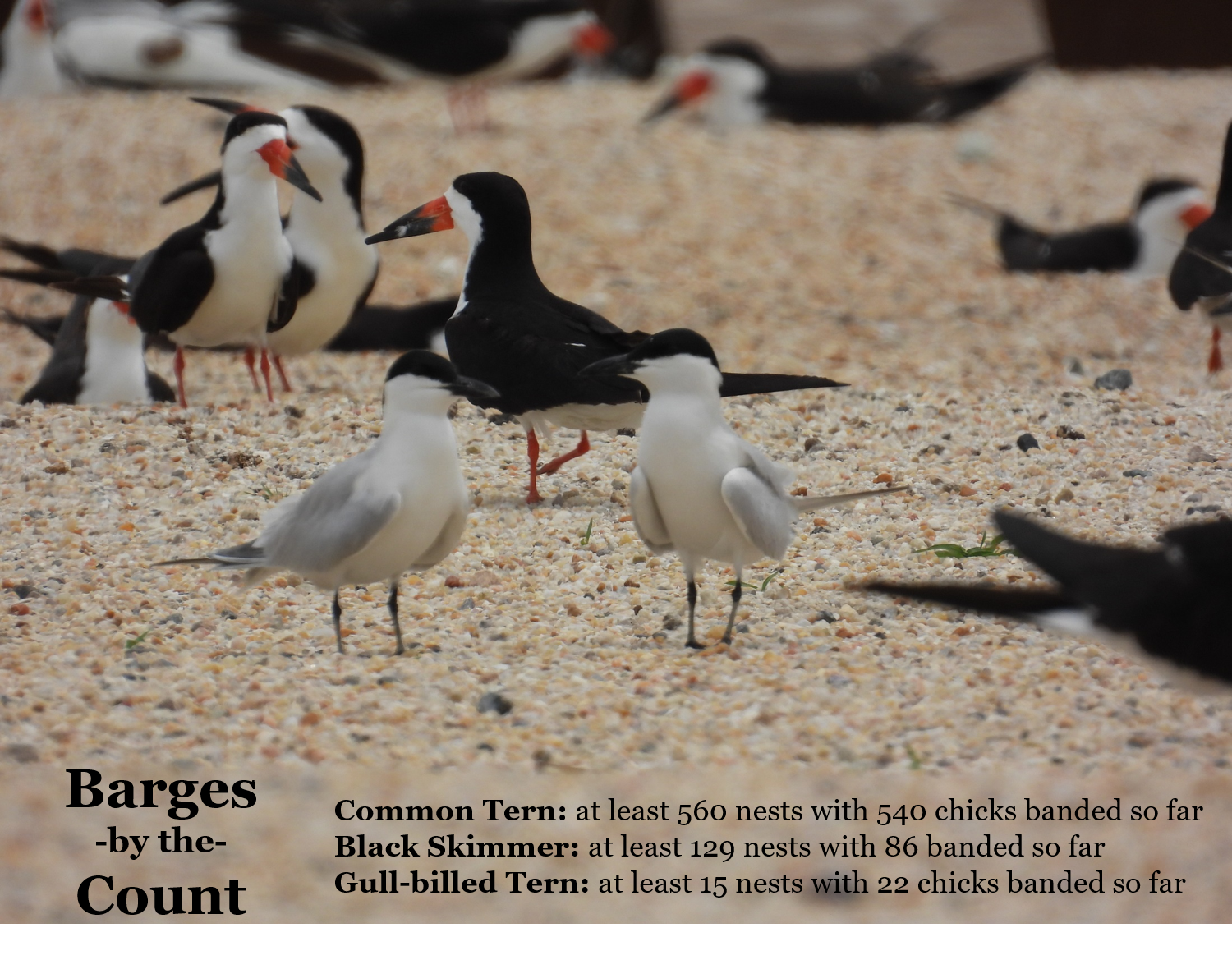 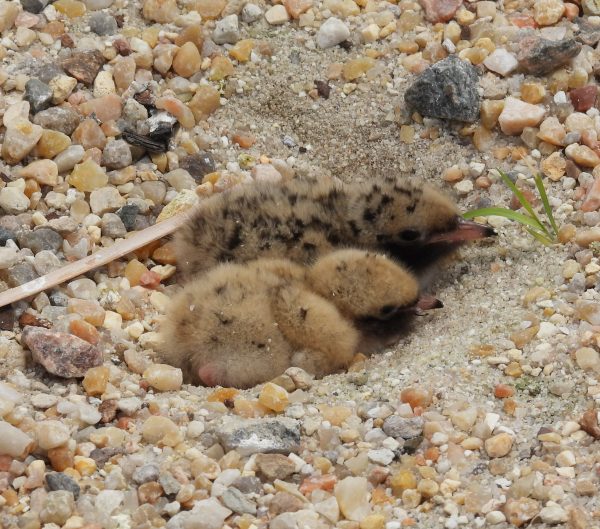 Like the eggs they hatch out of, seabird chicks can be incredibly variable in color and pattern. Upon hatching, chicks are well-developed with open eyes and down coating, and are mobile within 24 hours of emergence from their eggs.

Once the royal and sandwich tern chicks are on the move, they gather into a large crèche (a tight group) made up of hundreds to thousands of other chicks recently hatched within the colony. The crèche consists of chicks varying in age from just a few days after hatching to over a month old—all of which remain in the crèche until fledging. And, even though their chicks leave the nest and join the crèche shortly after hatching, the adults will continue to care for and feed only their offspring. Adults and chicks are able to identify and locate one another by recognizing each other’s individual vocalizations, even among the cacophony of thousands of other calling birds. In fact, research has shown that even recently hatched chicks and chicks in late stage development still within their eggs can recognize the vocalizations of a parent!

The advantage of nesting in such large colonies and raising chicks within a crèche better protects individual terns from predation threats through what biologists refer to as a dilution effect (the odds of an individual being captured by a predator decreases as group size increases). Furthermore, there are always adults on guard duty at any given time, resulting in a higher probability of detecting predators and alerting the colony before predation can occur.

And now that the eggs have started hatching, it’s important to introduce our seabird followers to another incredibly important partner to the project… The Virginia Tech Shorebird Program (VTSP)! 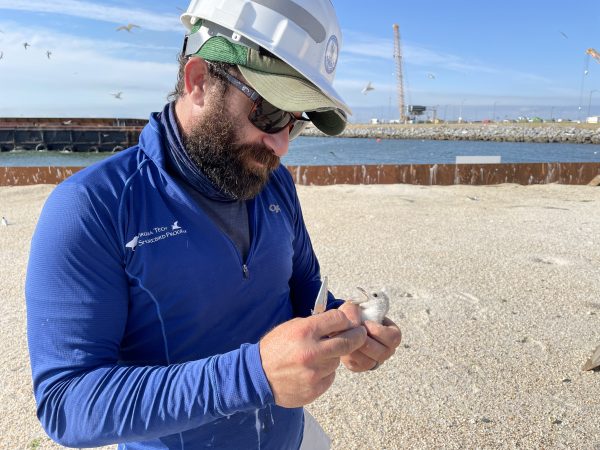 Dr. Dan Catlin bands a black skimmer chick atop one of the barges. Photo by Matt Fossum/Virginia Tech

The VTSP first became involved with this colony in 2018 when it was announced that South Island would likely be paved over in the following year. In response to this news, they were brought on board to band (place a uniquely labeled tag on a birds leg to enable individual identification of the bird in the future) as many birds as they could during the 2018 and 2019 nesting season—before construction was underway. This was long before Governor Northam’s directive to provide an alternative nesting place for the colony. In 2018, we were still unsure what habitat, if any, could be provided for the birds once the paving occurred. The importance of these early banding efforts cannot be understated because without that initial work, we would have had no way of knowing where the birds that formerly used South Island ultimately moved to when it was no longer available. 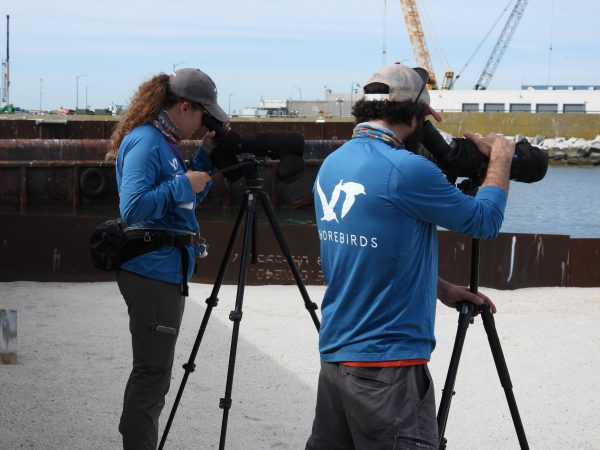 Once the plan was established to use Fort Wool and the barges in 2020, the VTSP was asked to continue its work resighting (conducting surveys for banded individuals) and banding birds at Fort Wool and on the barges. The objective behind this work is to determine whether or not any of the previously banded birds at South Island are using the newly provided habitat. This work also allows us to compare population demographics among the years when the birds were nesting on South Island relative to when Fort Wool became available. And while they did document some use of the Fort Wool habitat last year by South Island birds banded in 2018, we expect that this this will be an even bigger year for resights from the generation of chicks that were hatched and banded on South Island in 2018. Seabirds often take two to three years (with three years being the average) before returning to their natal nesting grounds to breed. With that in mind, we hope to see the return and utilization of Fort Wool by many of those birds now that they’ve matured and are ready to start producing chicks of their own. 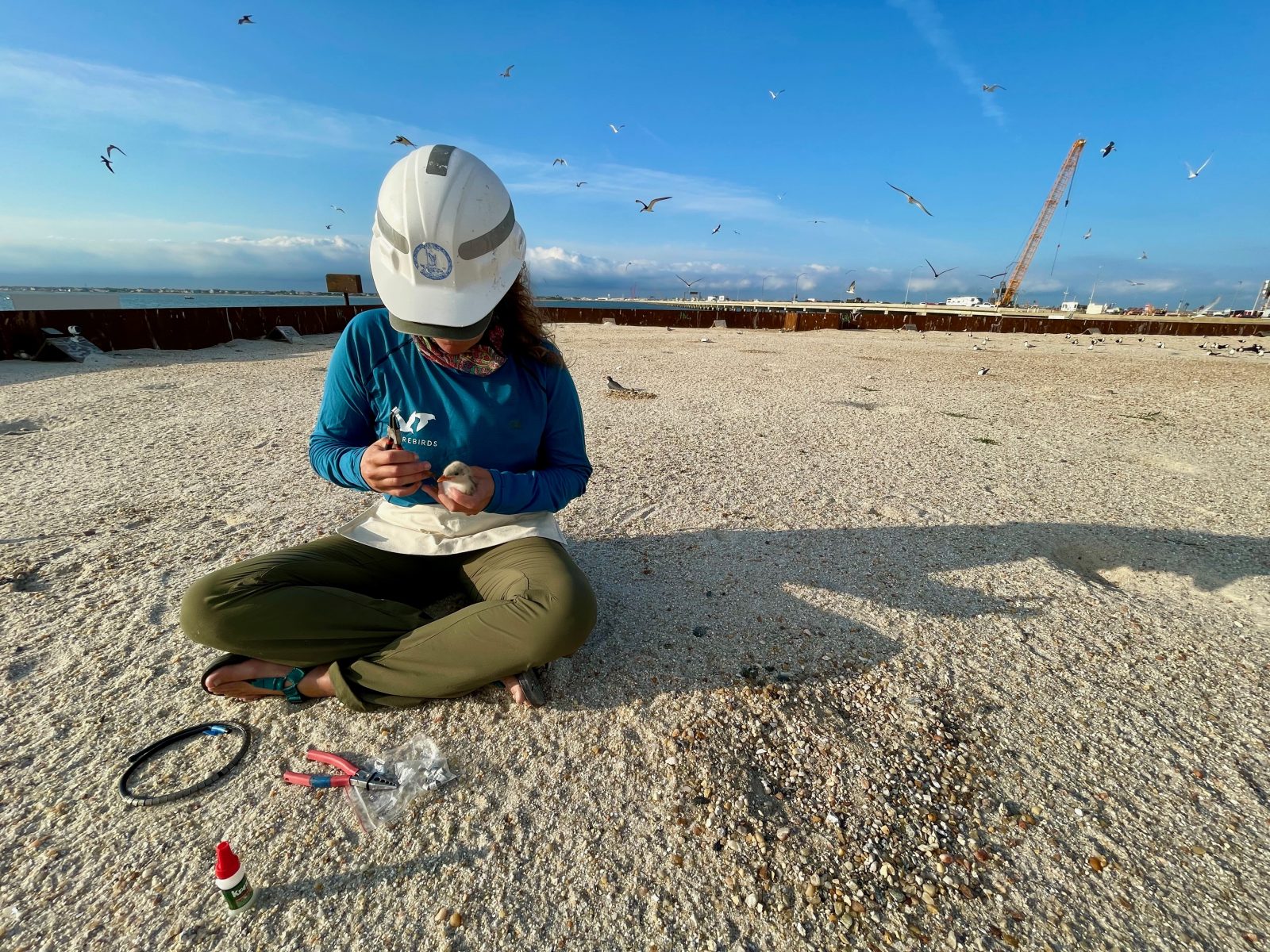 Kelsi Hunt bands a gull-billed tern chick atop one of the barges. Photo by Matt Fossum/Virginia Tech

In addition to the work the VTSP is doing to band and resight birds, team members also perform weekly observations of the colonies on Fort Wool and the barges. At first this may seem like a relatively simple process. However, when you realize there are thousands of birds using this habitat, it quickly seems like an almost impossible task to accomplish once, let alone weekly… especially for the royal tern colony comprised of over 90% of the state’s breeding adults. So how does VTSP do it?!

They are utilizing a remarkable (and free!) program called DotDotGoose, which is administered by the American Museum of Natural History and the Center for Biodiversity and Conservation. DotDotGoose offers an easy-to-use interface that allows researchers to count objects on photos in a more accurate and less time-consuming way than if they did it by hand. In this case, the VTSP is using it to estimate the size of the colony. Check out the before and after photos below to get a feel for how these counts work! 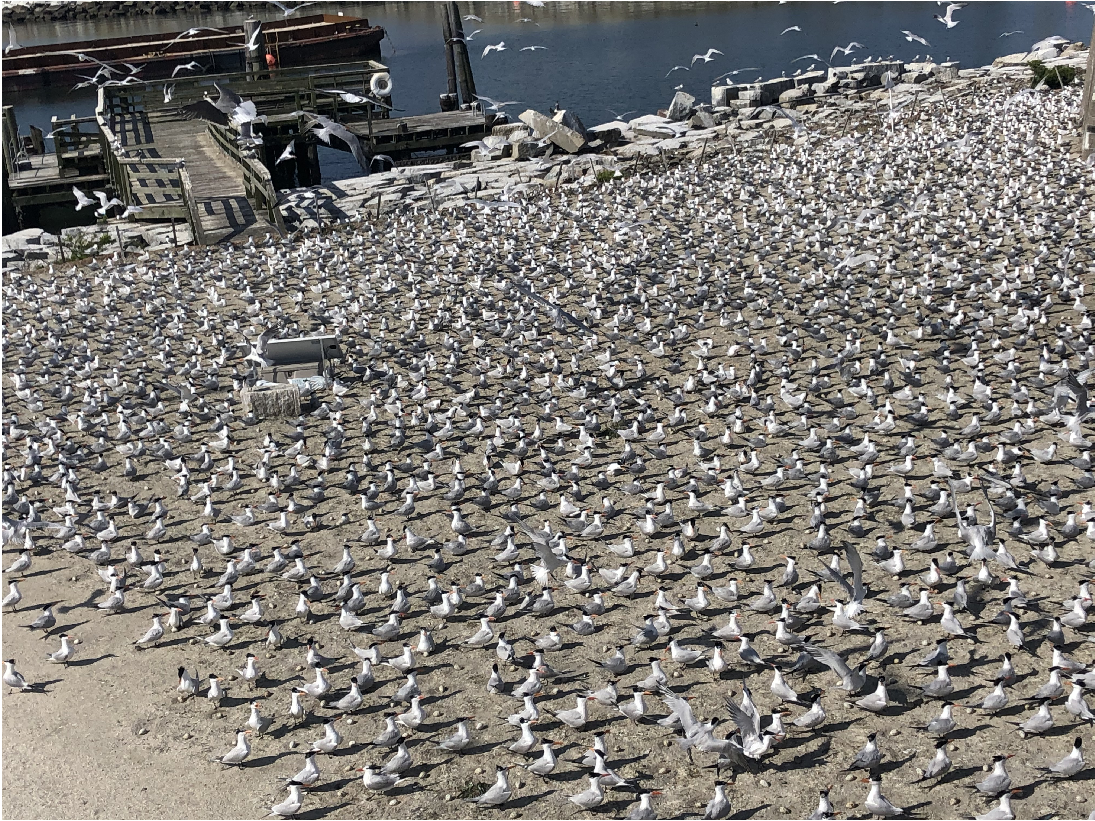 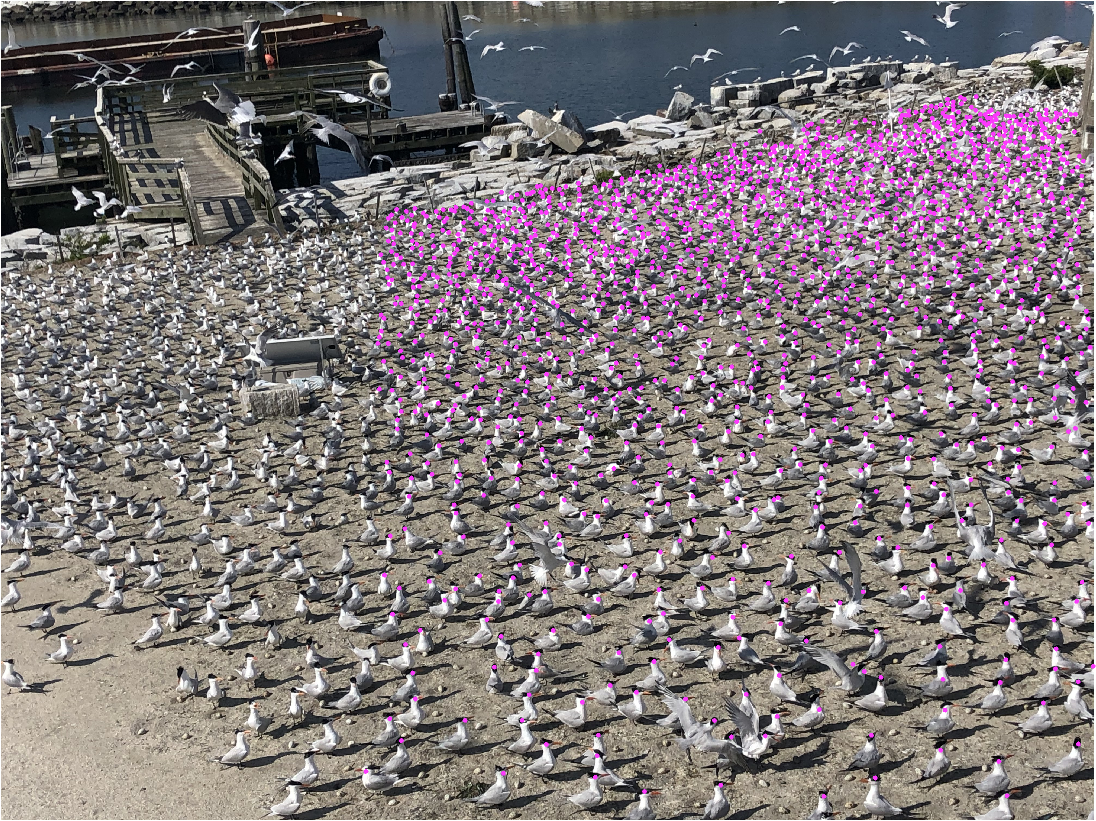 Well Fort Wool fans, that’s it for this month—but if you haven’t had your seabird fill quite yet, fear not! We’ve got two other exciting opportunities we want to put on your radar!

And, if you missed last month’s post, The Birds are Back in Town, you can read it here. We have also archived all of these posts at our Seabird Conservation in Hampton Roads website, which means if you haven’t been following along but want to get caught up, head on over to that page.  You can start reading from the beginning—see you next month!

Note: the next post in this series is now available for viewing, here.