HRBT May Update: The Birds are Back in Town 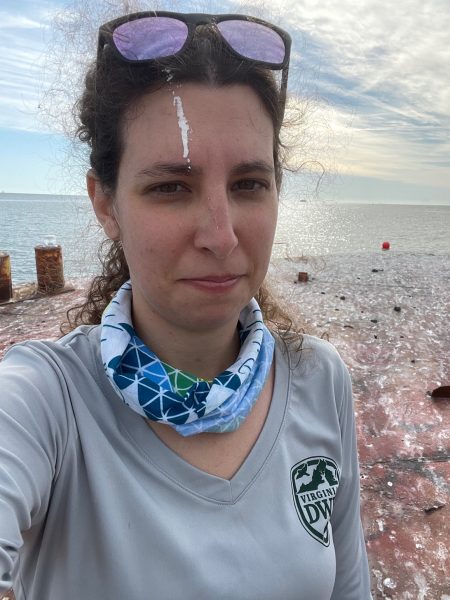 They say if a bird defecates on you, it is a sign of good luck. Personally, I prefer four-leaf clovers and lucky coins.

Welcome to the May post in our monthly blog series highlighting the Hampton Roads Bridge Tunnel Seabird Colony! If you missed last month’s update, ‘A Tale of Two Islands’, you can read it here. Our post this month contains an exciting new feature—360-degree photos! If a photo is labeled as interactive, simply click and drag anywhere in the image to move around within the image or use the buttons in the top left corner to zoom in/out or enter full screen mode.

The past month has been an absolute whirlwind as things onsite have changed dramatically, but in an incredibly exciting way! Last month, we reported that we had spotted the first arrivals of the season, royal terns and laughing gulls, but were still waiting for our other species of interest to arrive onsite…

…I’m happy to report that as of this month, not only have all of the remaining species arrived (including state-threatened gull-billed terns), but nesting is also officially underway! I was fortunate enough to accompany our partners at the Virginia Tech Shorebird Program on Tuesday and was floored by the amount of activity in the area relative to just a few short weeks ago. The difference between my last visit, marked mostly by a few Canada geese puttering about, was striking compared to my arrival this month. The chattering and squawking sounds from the colony were not only loud enough to completely mask the noise of the boat motor, but were borderline deafening at times. The colony itself blankets entire sections of the island, with nests spaced uniformly throughout and attended diligently by their respective owners. Our arrival to the island was met by a flurry of activity that soon died down as the birds return to their nests. 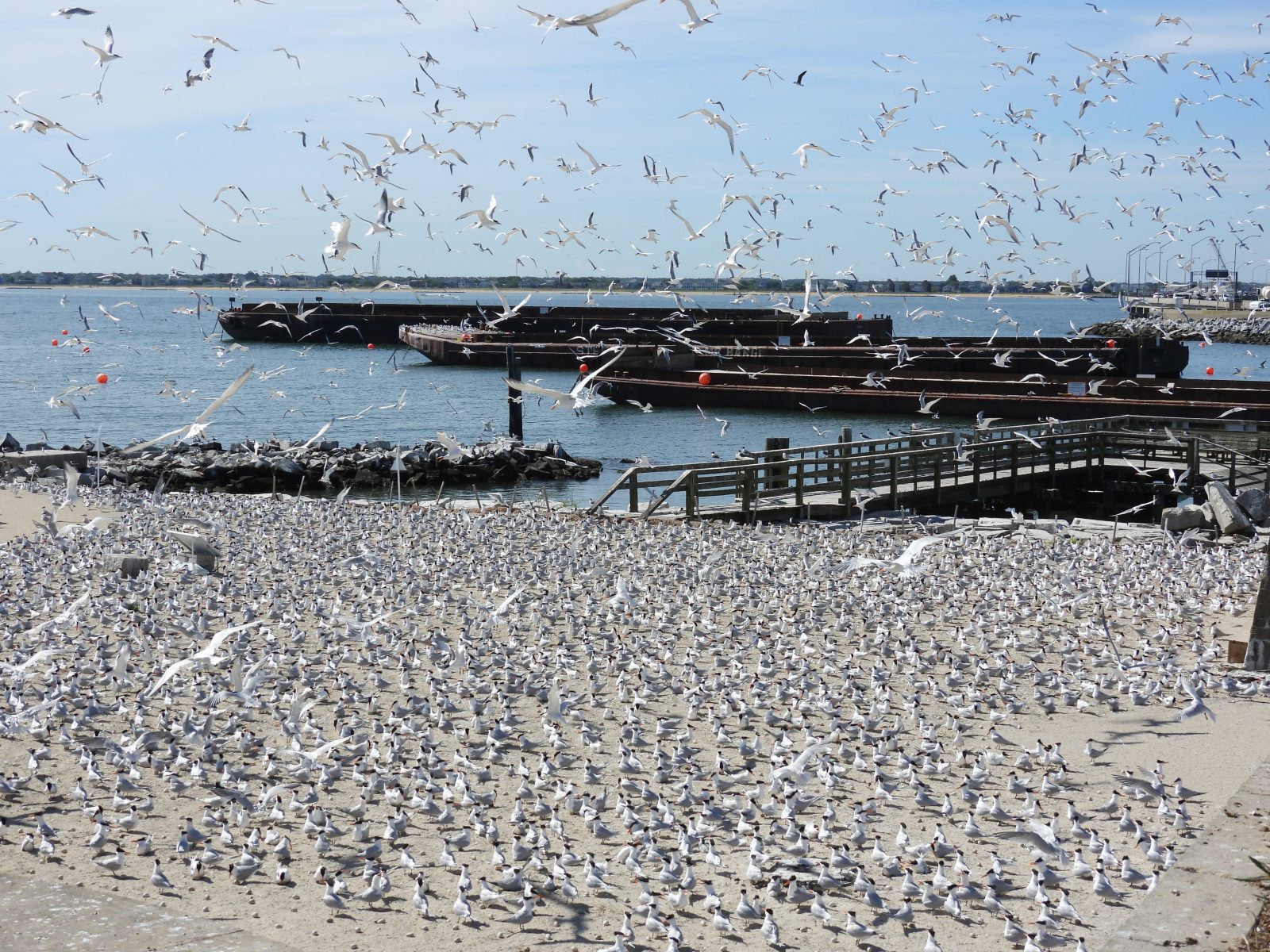 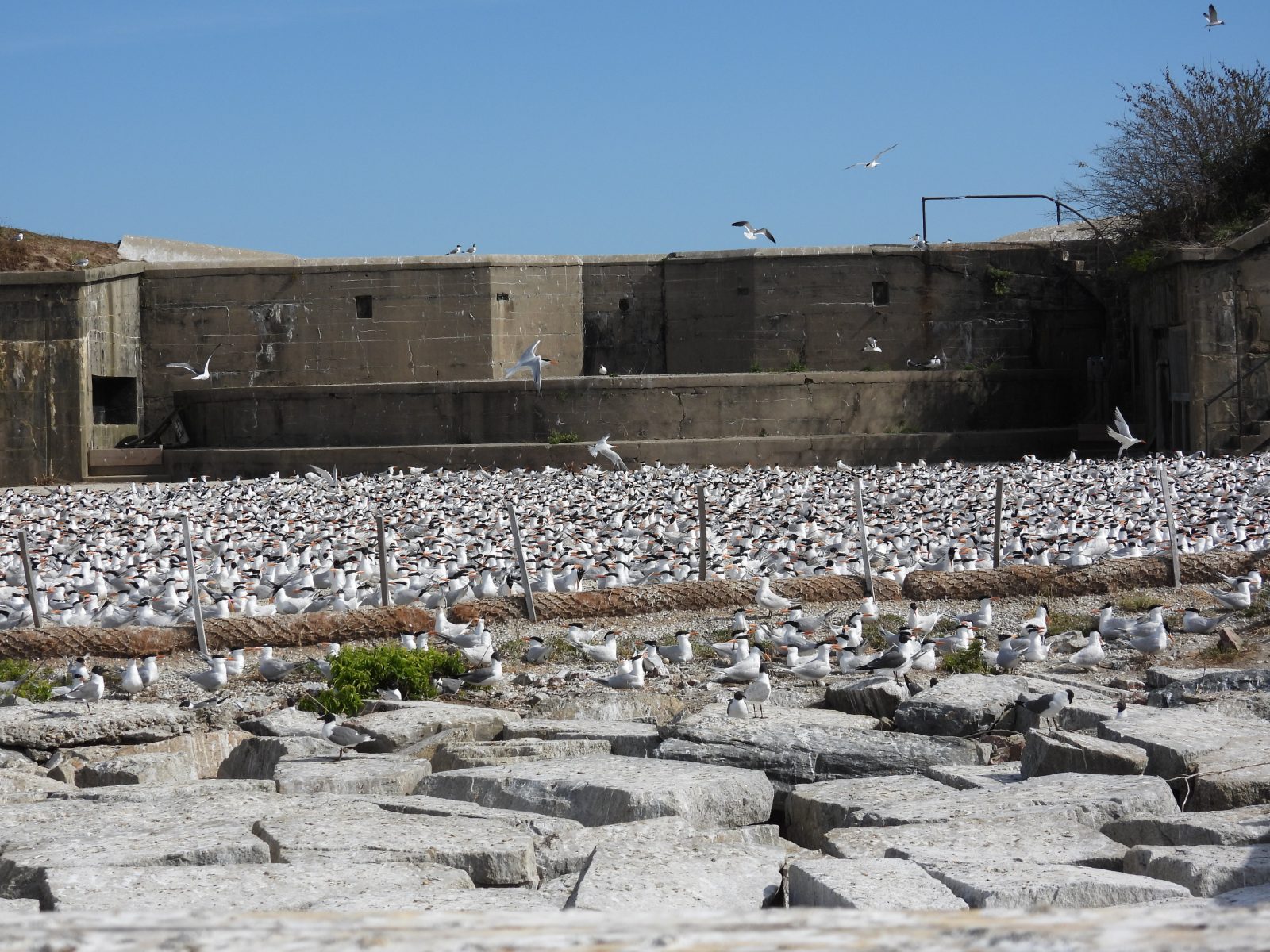 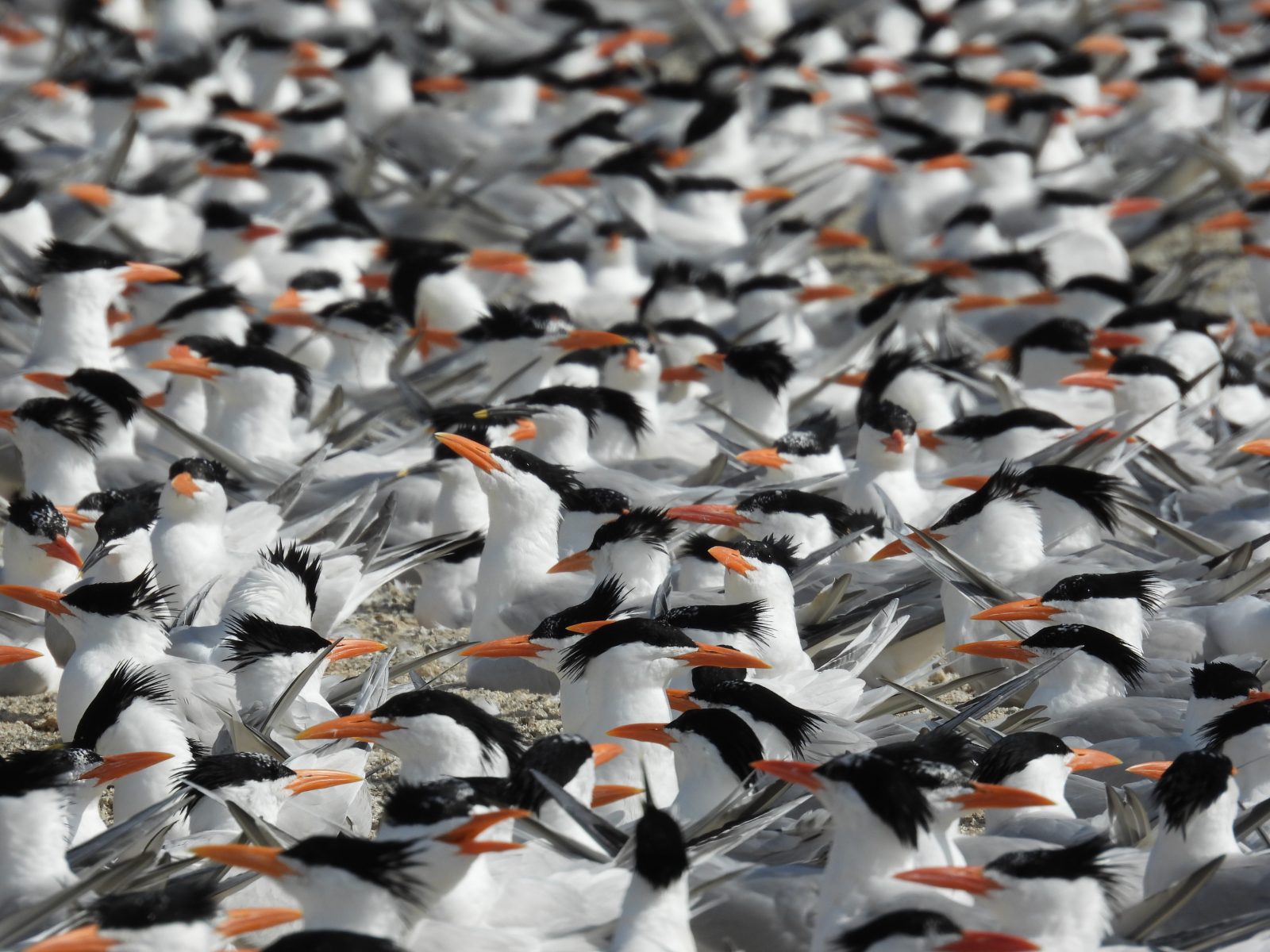 Close-up look at the nesting royal tern colony on Ft. Wool. See if you can spot the three sandwich terns amongst the royals!

It was important that when we got to the island, we moved quickly and gingerly to a hidden location where we could observe the birds from a distance and minimize disturbance to the colony. Seabirds, compared to other birds (like the house finch nesting in a hanging planter mere feet from my front door), are especially susceptible to abandoning their nests if they are disturbed. Because they nest in the open, repeated or significant disturbance at a nest location can indicate that the site is not suitable for nesting and they will move on to find a better location. To protect the massive effort invested in creating this nesting habitat, it is imperative that we minimize disturbance to the nesting birds as much as possible.

Just as they did last year, the royal terns have established a truly massive colony on Ft. Wool. However, they’ve chosen an interesting location relative to last year and instead of staking out the center of the parade ground near the tower, they have situated themselves close to the dock, outside of the fort. There were well over 3,000 adult royal terns nesting on the parade grounds during our visit and hundreds of other individuals loafing amongst the rocks and the dock railings.

NOTE: The below photo is an interactive 360 degree image of Ft. Wool. 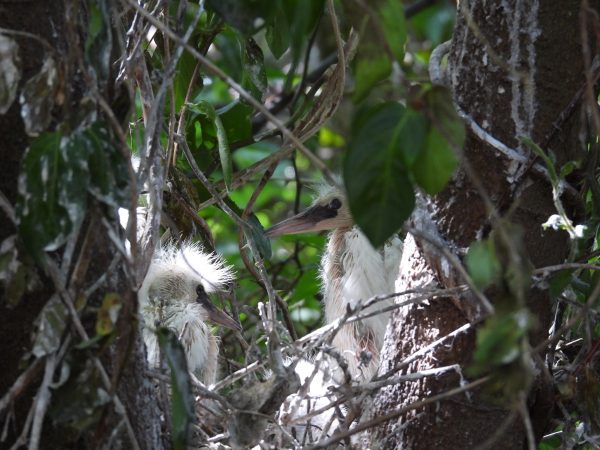 Snowy egret chicks in their nest that is part of the rookery on Ft. Wool. 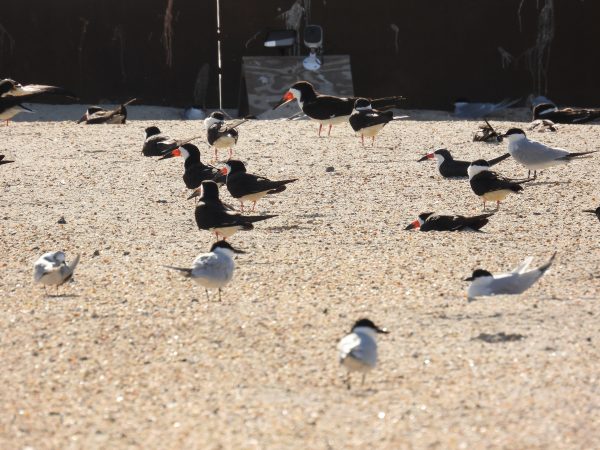 Black skimmers and gull-billed terns (state threatened species) occupying one of the barges in the embayment.

Numerous sandwich terns were also seen intermixed within the colony and have presumably begun nesting on Ft. Wool as well. Laughing gull nests were found interspersed between the parade grounds and the rip rap as well as hidden amongst the earthen mounds atop the batteries. And, while it is too early for any of our target species to have hatched chicks quite yet, we did notice several nestlings within the snowy egret rookery on the southeast side of the island.

In addition to all of the action out on Ft. Wool, we were also able to evaluate the nesting activity atop the barges. Possibly the most important discovery of the day was made when we documented 11 adult gull-billed terns, four of which were incubating eggs on the first barge we surveyed. Gull-billed terns are state-threatened in Virginia so compared to the single gull-billed nest on the barges last year (an incredibly exciting achievement in itself), this is a monumental new development for the barges!

Besides this exciting discovery, we also documented nests from common terns and the incredibly charismatic and unique black skimmers. Last year we didn’t see a large number of nests on the barges until late June, so it appears that our efforts to get suitable nesting habitat out earlier in the year has already started to pay off!

NOTE: The below photo is an interactive 360 degree image of the barges.

When it comes to seabirds, the nests or “scrapes” they create may not appear all that impressive to the untrained eye. They are relatively simple and typically no more than a shallow depression or bowl in a sandy-gravel substrate. However, whatever a seabird nest may lack in appearance, it is easily made up for by the absolutely beautiful eggs the nest will hopefully come to hold. I have always been fascinated by bird eggs, but there is just something so enchanting about the splattered paint-like appearance to the eggs produced by these species. Not only is every egg unique in its look and pattern, but for many species, like common terns, there is even a remarkable amount of variation in egg color. 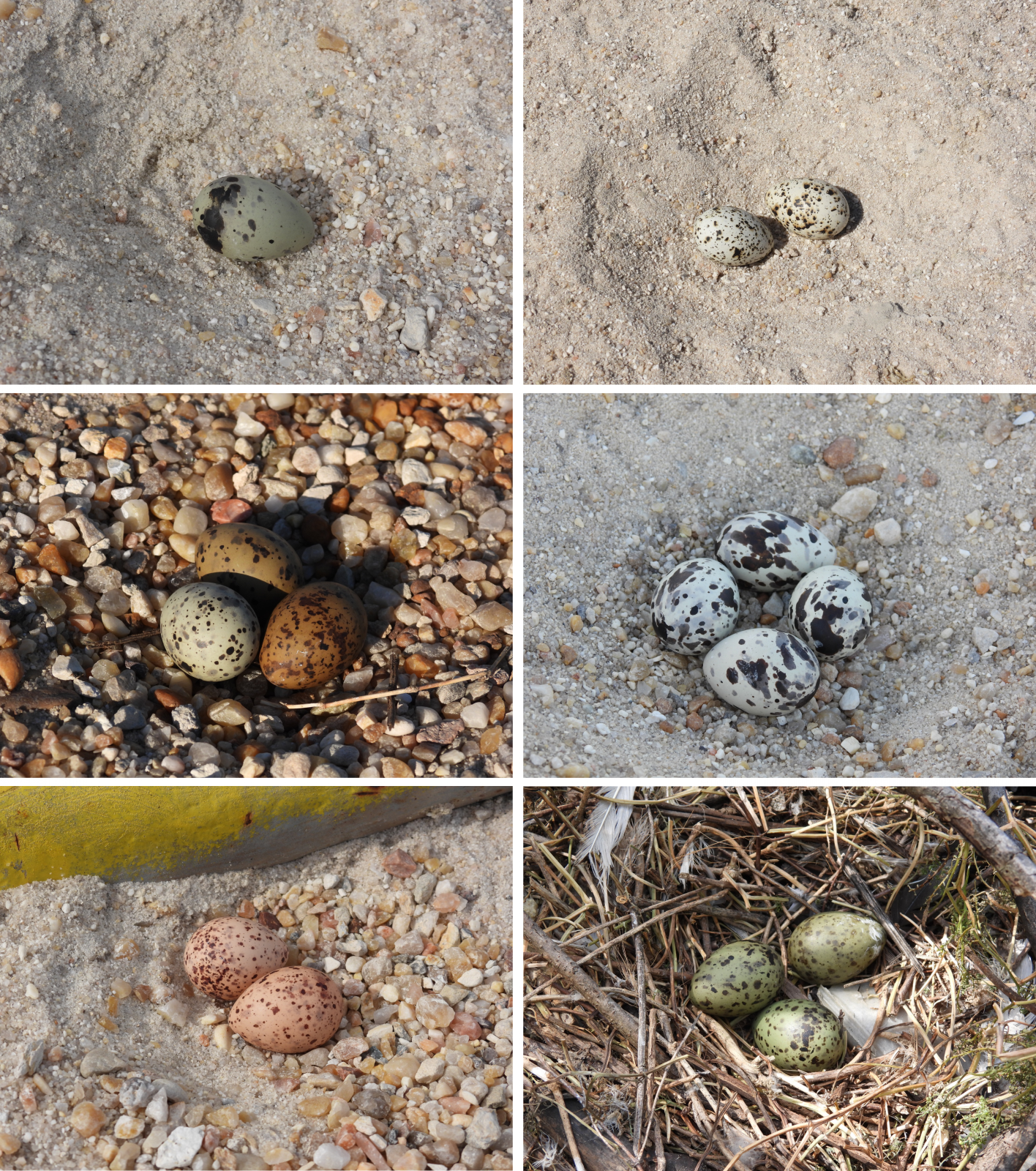 An assortment of different egg colors and patterns from our species of interest at the site. Photos in the left column are all eggs laid by common terns, while the photos in the right column are from the following species: royal tern (top), black skimmer (middle), laughing gull (bottom).

Research has shown that aside from being beautiful to look at, all that variation in egg appearance actually plays a vital role in a bird’s ability to identify their own egg (or eggs) within a colony made up of hundreds or thousands of other birds. A 1972 study found that even when eggs were switched within a royal tern colony, the adults were still able to easily identify their eggs, presumably by recognizing the unique markings on each one.

Left: royal terns and their eggs spaced closely together on the parade ground. Right: a royal tern identifies its egg from thousands of other options.

And, if you think that’s amazing, just wait until you learn about how adults are able to recognize their chicks in next month’s update. The next report will be a big one as we will not only be discussing those details but also spotlighting our VTech partners and the incredible work they are doing to research species demographics at this site. And, if all goes well—we will also be able to report on our very first hatch events of the season. Be on the lookout for that update, and if you are not currently subscribed to our once a month Notes from the Field newsletter where this series is published, you can do so by clicking here. Just remember to check the box for wildlife updates when signing up. See you next month!