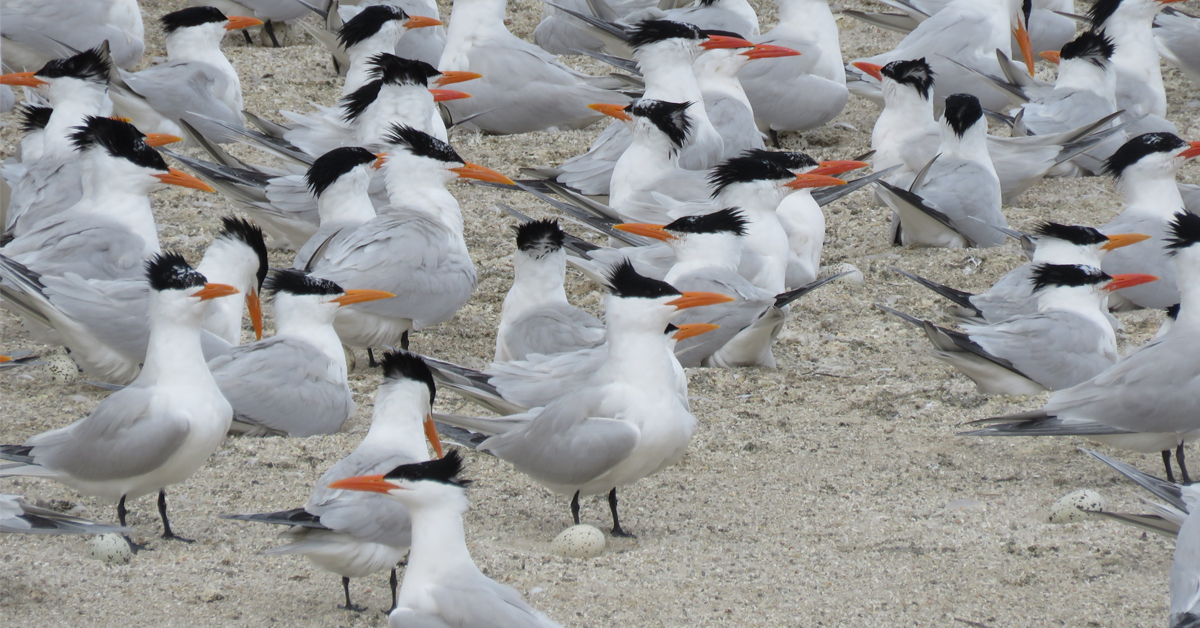 Royal terns on the Ft. Wool parade ground tending to their eggs in 2020. Photo by Meagan Thomas/DWR

Last year I had the opportunity to assist a team of seasoned Virginia Department of Wildlife Resources (DWR) biologists pull off the seemingly impossible to achieve what is likely one of the largest ongoing conservation success stories in our state’s history. It was the kind of impact that just about every wildlife biologist dreams of achieving in their career, and I was fortunate enough to be involved while barely six months into my tenure as a Watchable Wildlife Biologist for DWR. I’m of course talking about the successful relocation of the Commonwealth’s largest seabird colony at the Hampton Roads Bridge-Tunnel Complex. (Read more in the Virginia Wildlife magazine article “If You Build It, They Will Come.”)

What many may not realize is that even after the birds and the barges departed for the winter last year, our team never stopped working to ensure the colony would have a place to safely nest again the following spring. After all, like clockwork, the birds will be back again in just a few short weeks and we need to be ready.

Fortunately, having the winter to plan and prepare means 2021 is shaping up to be an even more successful year than the last. For one thing, we’ve got a season under our belts which has allowed us to fine-tune our efforts. Perhaps even more importantly—this year we’re able to get an earlier start. Depending on the weather, birds in this colony begin returning to the Hampton area as soon as early April.  We are optimistic that this head start will mean even more birds will choose to use the habitats on Fort Wool and the barges.

And in addition to all the work we’re doing to prepare for and monitor the seabirds in 2021, we’ll also be releasing a monthly update, just like this one, to keep folks up to date on what’s happening with the colony. This month’s briefing is focused on the habitat management efforts at the site, so if you want to learn more about what changes we will be implementing in 2021 — keep reading!

What’s Going on at Ft. Wool?

As luck would have it, the sandy nesting habitat on the parade grounds has remained in relatively good condition with minimal loss or movement since the birds departed last year. DWR staff took measures to ensure the area remained clear of any emerging vegetation by spot-treating with herbicide last fall and again this month. In addition to this spot treatment, we are also conducting some more targeted management of the smaller woody shrubs around and atop the batteries to prevent further deterioration of the original stonework. These shrubs will be cut at ground level and treated with herbicides, while the larger shrubs and trees will be treated with a basal bark herbicide to contain growth.

We are also temporarily enclosing the door and window openings of the fort batteries. This is primarily to prevent any accidental entrapment of flightless young and fledgling seabirds, but it will also thwart any nuisance species like pigeons from nesting within the interior spaces of the fort. 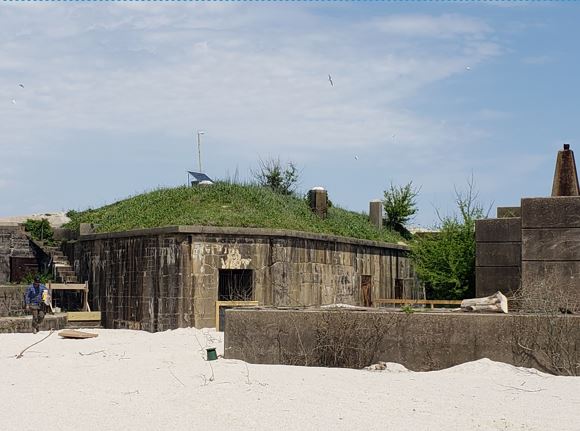 One of the earthen mounds atop the batteries which is in need of vegetation management. Photo by Becky Gwynn/DWR 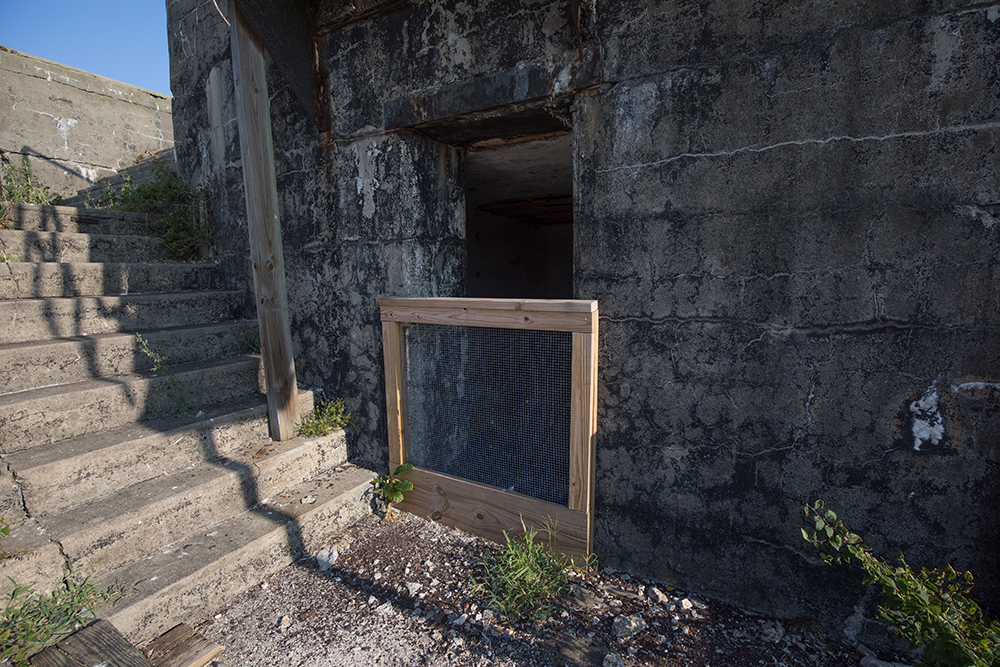 An example of the barriers used to prevent birds from entering the interior of the fort in 2020. The barriers used in 2021 will provide full coverage of the door and window openings. Photo by Meghan Marchetti/DWR 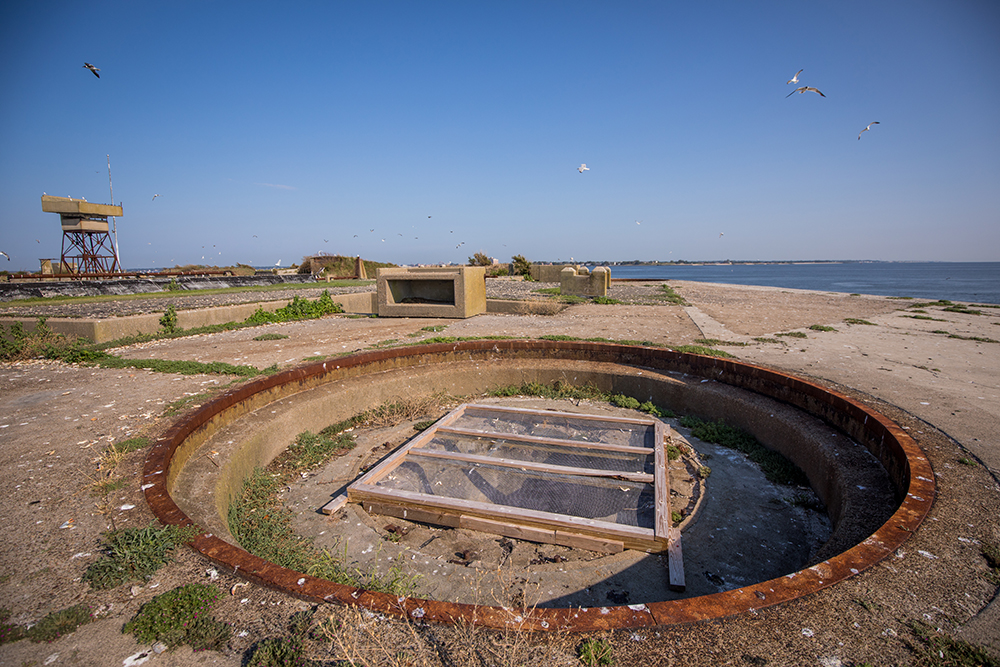 An example of one of the barriers used to prevent birds from becoming entrapped within one of the wells atop Ft. Wool. Photo by Meghan Marchetti/DWR

And what’s the deal with the barges?

One of the more notable features of the 2020 success were the seven sand-topped barges anchored in the embayment next to Ft. Wool that provided an additional acre of nesting habitat. While coordinating the modification and arrival of these barges was one of the biggest logistical hurdles we had to face, in the end it proved well worth the headache when approximately 800 black skimmers and common terns nested on the barges as well as a pair of state-threatened gull-billed terns that fledged two young.

This year we will only be using up to four barges in the embayment, most of which are greater in size than any of the seven used last year. All in all, these barges will provide up to 50,000 square feet of nesting area — 10,000 more than last year. To prevent any inundated nests or drownings, each barge will be outfitted with a drainage system topped with sand and pea gravel to ensure that water doesn’t pond or drain too slowly. Collectively, the barges will be covered in 2,000 tons of sand and gravel. And just like last year, side walls will be welded in place to prevent young chicks from stepping or flying off the edges before they are developmentally ready for flight.

Additionally, we will continue to install a suite of anti-perching devices on any surfaces atop the barges higher than four feet. These anti-perching measures include a combination of coiled wire, monofilament line, and spikes to prevent predatory birds from perching anywhere on the barges where they could grab an egg or chick. After all of our modifications are installed, the barges should be transported and anchored to the embayment by March 31, a month and a half earlier than last nesting season. 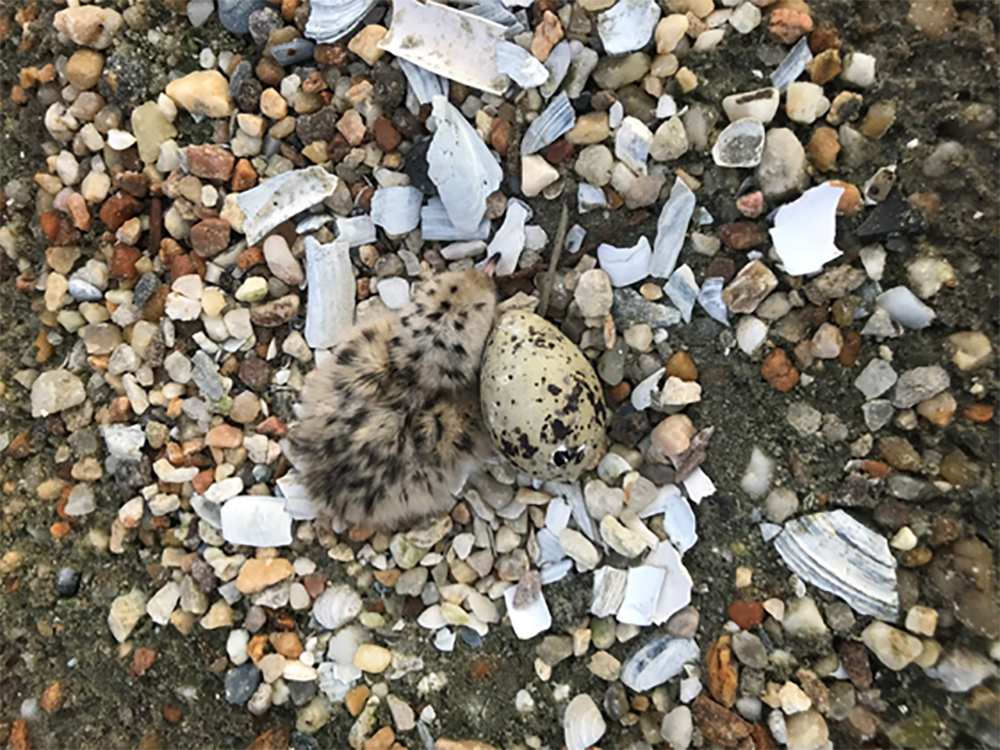 Common tern chick and egg from a 2020 nest atop one of the barges. Photo by David Norris/DWR 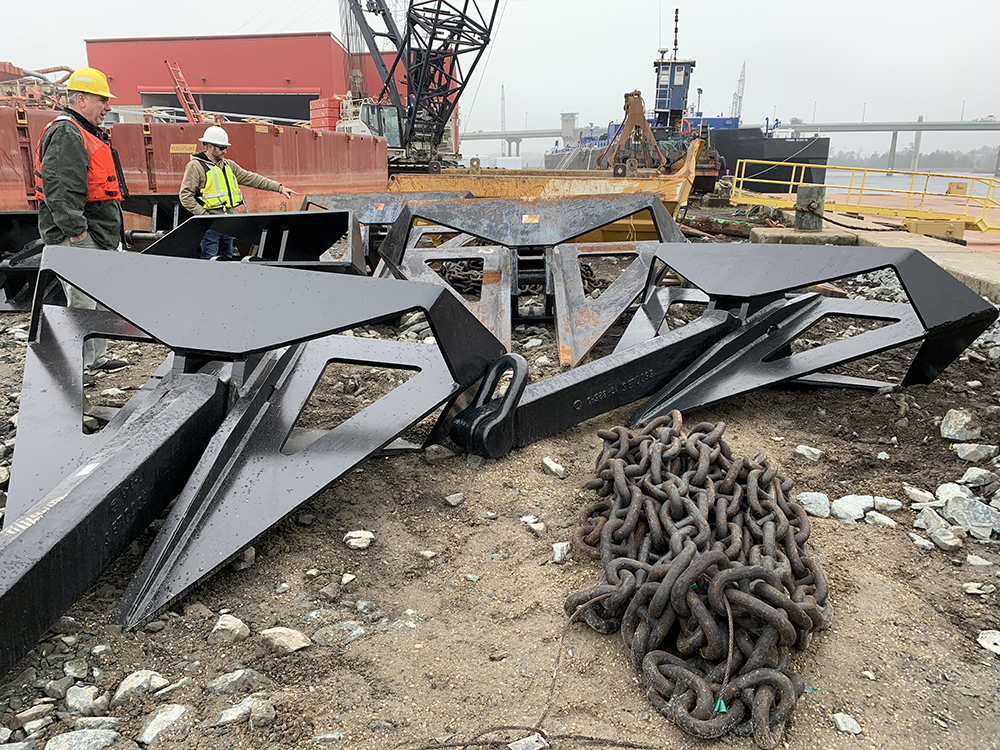 DWR Regional Wildlife Manager, David Norris, meets with PreCon Marine Operations Manager, Matt Anders, to view the anchors that will be used to tether the barges to the embayment at Ft. Wool. Photo by Meagan Thomas/DWR 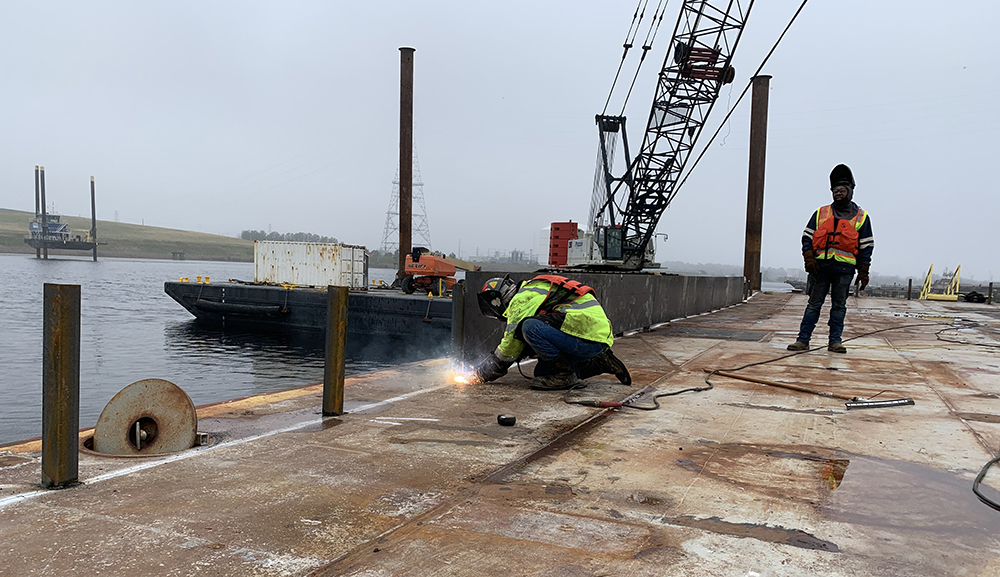 PreCon Marine Construction employees weld a side wall to one of the barges which will be used by the project in 2021. Photo by Meagan Thomas/DWR 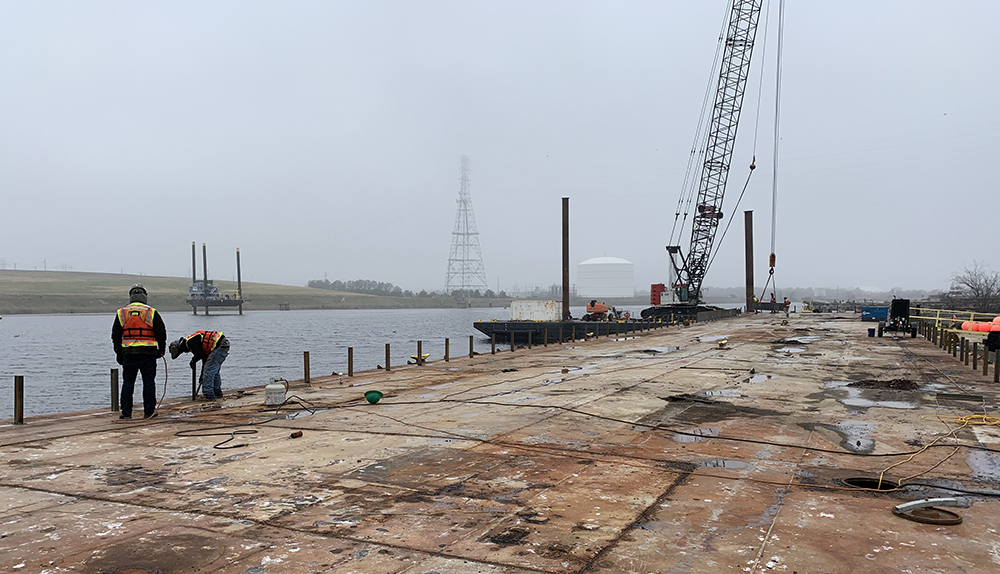 One of the 2021 barges currently under construction by Precon Marine Construction employees in preparation for the upcoming deployment. Photo by Meagan Thomas/DWR

Finally, it is imperative that the barges and Ft. Wool remain free of human disturbance to minimize any chances of nest or chick abandonment. With that in mind, we will be continuing to enforce the “no boats zone” that is marked by a line of white and orange buoys in the Ft. Wool embayment.

Left: An example of the no trespassing signs that are installed around Ft. Wool. Photo by Becky Gwynn/DWR. Right: A tern perches on one of the buoys which demarcates the “no boat zone”. Photo by Meghan Marchetti/DWR

While we know many dedicated bird lovers across the state may be left wishing they had the chance to get a more up close and personal look at what’s happening with the colony, we hope you’ll enjoy following along via this monthly blog series which will outline all the trials and tribulations surrounding the birds’ upcoming arrival and nesting efforts! Next month’s post (now available here!) will cover a dive into the specifics we use to lure the colony in and, if we’re lucky, may even contain some details about the season’s first arrivals! And since you can’t view the birds at the Hampton Roads Bridge and Tunnel Site, we will be providing a list of our top picks for viewing at publicly accessible locations. So if you want to stay up to date on all the barge hopping, nest counting, and bird banding action this year, please consider subscribing to our monthly Notes from the Field email newsletter!

We hope to see you next month!