Female of the Pair Replaced by a Familiar Bird

Much action was seen on camera over the weekend as an intruder female, who will be familiar to veteran Falcon Cam watchers, appeared to successfully take the place of this year’s unbanded female.

On Saturday, March 7, a windy day in Richmond, the falcon pair appeared on camera for only a few minutes in the morning and early afternoon.  But Sunday, March 8 saw a lot of activity as they were challenged by an intruder.  Though there were comings and goings throughout the early morning, poor lighting made it difficult to distinguish among individual birds.  The intruding female was first verified as a new bird because of her bands, visible as she emerged from the nest box at ~ 8:30 a.m.  But the unbanded female was back on camera from 9 a.m. onward.  As can be expected, conflict ensued. 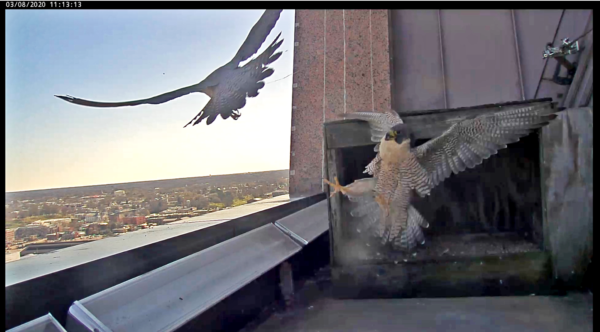 The next several hours were likely spent in clashes among the birds, much of it not visible to the viewer but understood to be happening because of the highly agitated state of the birds on camera.  Several attacks by the intruder were captured on camera, however, and can be seen in the video below.  The unbanded female, sticking close to the box, was last seen on camera shortly after 11:15 a.m.  From 1 pm onward, the banded intruder made frequent, repeated visits to the ledge, lasting as little as a minute or even seconds at a time.  Her highly anxious state and the brief duration of her visits suggest that she was likely involved in numerous aerial altercations with the unbanded female, and perhaps even the male.  Following an absence of roughly an hour and a half, the banded intruder finally visited the nest box at 6:45 pm, even working the scrape.  Appearing more relaxed as the night fell, she settled on the parapet to roost for a few hours.

Following the excitement of this past Saturday, the new, banded bird can no longer be considered an intruder, as she has established herself as the new female of the pair – at least for the time being.  She has been regularly seen on camera, alone and in interactions with the male, over the past two days.

So who is the new female?  Based on the black and green band on her left leg, which reads 95/AK, we know her to be the same female who replaced an unbanded female at this very same site in 2019.  Originating from Delaware, 95/AK was last seen in the streaky sub-adult plumage typical of second year peregrines.  She is now showing in her full adult plumage, with a pale buffy wash on her underparts and distinctive, fine vertical speckling on her upper breast. 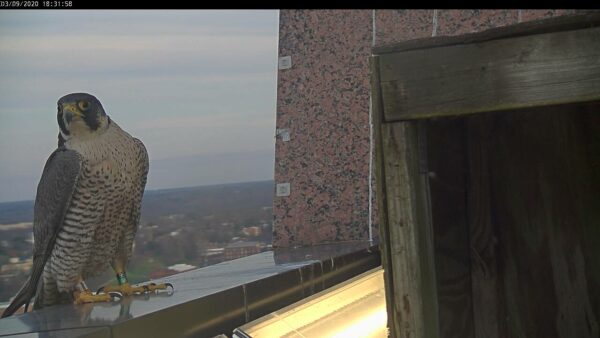 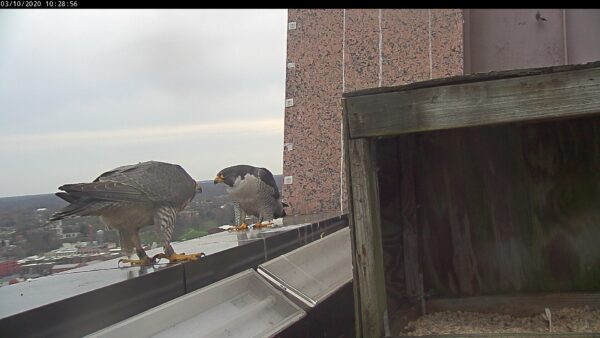