The founding fathers of America envisioned a nation of farmers, not the least of which was James Madison, whose farm lies at the beginning of the Green Springs Loop. With such a long and rich history, Virginia unsurprisingly hosts some of the oldest farms in the nation. Several of these can be seen in the Green Springs National Historic District interspersed by numerous woodlots and crossed by several streams. This area is great for wildlife such as short-eared owls, rusty blackbirds and horned larks. Along this loop is Lake Anna, the largest waterbody in the central Virginia Piedmont. The lake has produced dozens of unusual species sightings, ranging from loons to shearwaters, making it well worth the effort to explore thoroughly. Be on the look out for regularly-occurring species, such as bald eagles, ospreys, tundra swans and many, many more. Interspersed along the way are a few smaller parks that host a great variety of resident species, with the occasional surprise during migration. 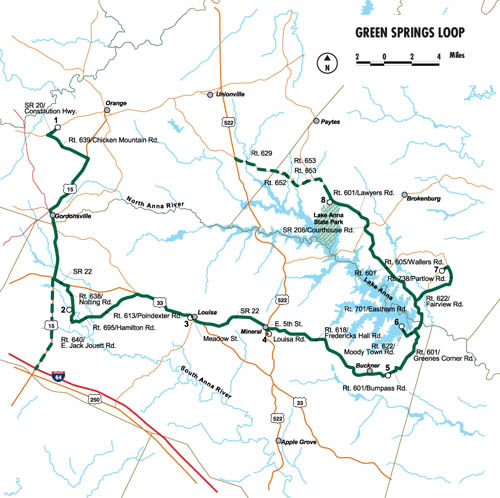