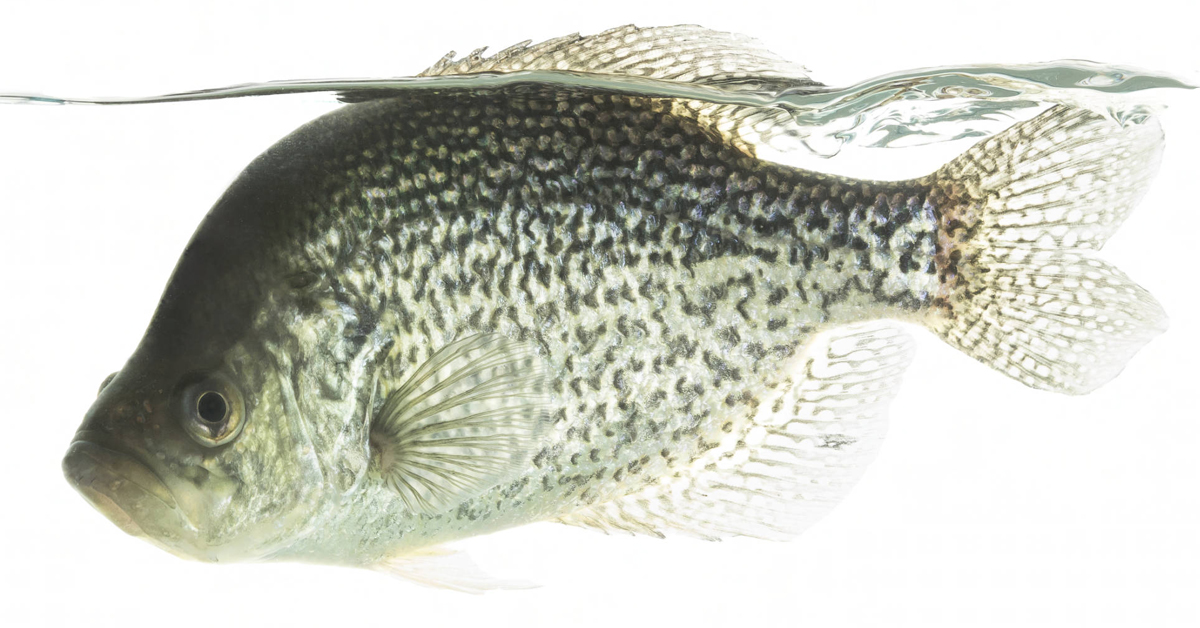 Is there an angler alive who doesn’t thrill to the sight of a bobber twitching, then slowly descending out of sight as a crappie nails the minnow below?

Bass and trout may be the “glamor” species, but for Virginia fishermen, the crappie is king. There’s little cause for wonder why. Crappies are plentiful throughout the state, from reservoirs in the western mountains to tidewater rivers and blackwater lakes in the east. And they’re almost always willing to bite.

While they can be caught year-round, most anglers feel there’s no finer time to go after these speckled silver, white, and black panfish than spring. That’s when the fish gather in dense schools before swarming into the shallows to spawn near flooded brush, timber, dock pilings and beaver huts.

When the redbuds bloom and turkeys gobble from ridge tops, crappies shake themselves out of their winter doldrums and move towards shore, stirring deep roots within the hearts of anglers. The fishing season is going full bore once again. It’s time to catch crappies!

Also known as speckled perch, crappies are great fish for family outings, biting more readily than species such as bass, muskies, and trout. That makes them the perfect choice for someone new to the sport of angling—young or old.

Crappies are delicious when fried, baked, or broiled. Even a half-pounder yields two small but tasty filets. Since a female can expel over 50,000 eggs, there’s no worry about keeping a few fish for the pan. Regular harvesting prevents crappie populations from outgrowing their habitat and becoming stunted.

Virginia’s lakes and rivers are home to both black and white crappies. Sometimes you’ll find mixed populations, such as in Buggs Island Lake (Kerr Reservoir). In other waters such as lakes Moomaw and Anna, black crappies are the major species found. 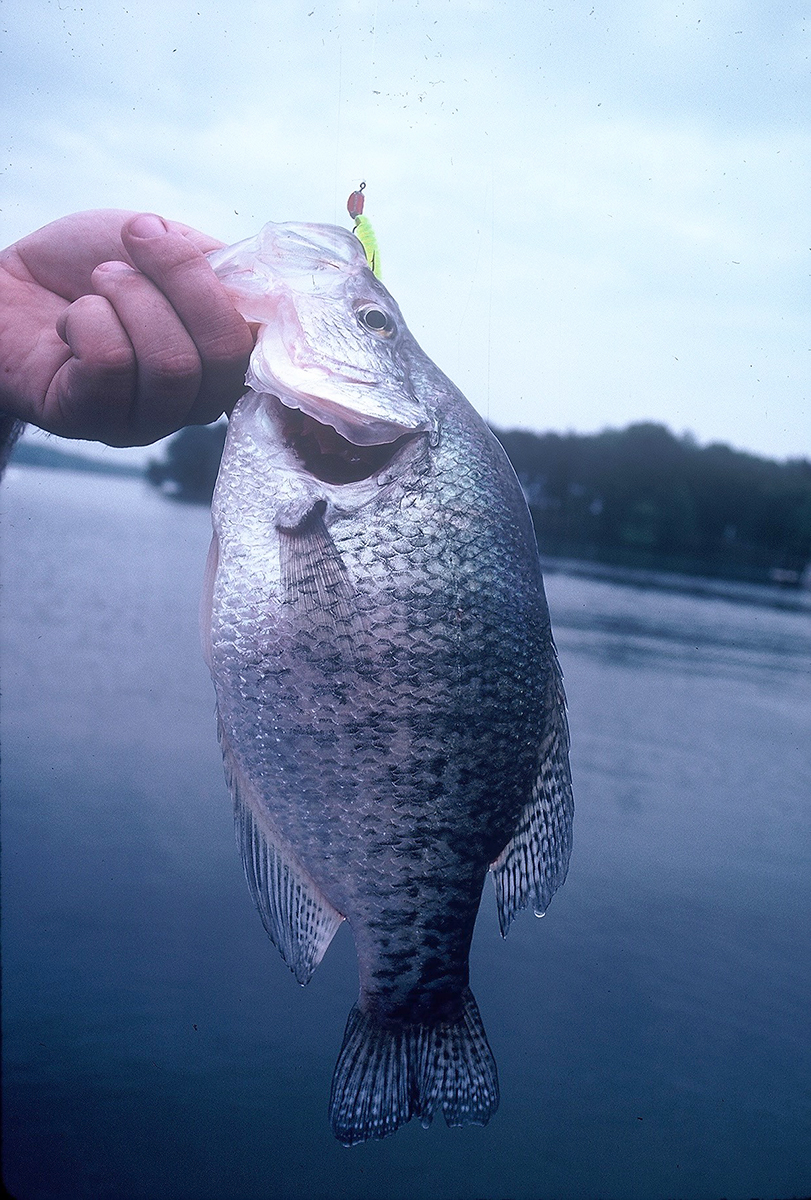 A nice crappie caught on a jig. Photo by Gerald Almy

A typical crappie weighs a half to 1 pound, but some lakes such as Buggs Island tend to produce larger than average specimens in the 1 to 2-pound class. A 2-pounder or released fish measuring 15 inches merits a citation award from the Virginia Department of Wildlife Resources (DWR).

A variety of tackle can be used to catch crappies, including light spinning gear, bamboo and fiberglass cane poles, even fly rods. Here are four proven tactics you can use for Old Dominion crappies this spring.

When winter loosens its grip on the land and water temperatures rise into the upper 40s and low 50s, crappies stir from the depths and begin a slow movement towards the shoreline. This isn’t a quick, sudden shift into the shallows. Instead, the transition process takes several weeks.

Some of the year’s best fishing comes in March for these crappies that are gradually becoming more active. The first steps are tentative, easing into shallower water than they inhabited during winter, typically 10-20 foot depths.

Drift fishing is the way to go since it allows you to cover lots of water and pinpoint roving schools. Concentrate on points, the mouths of large feeder creeks, drop-offs, bridge pilings, creek channel edges and deep-water structure. A depth finder will help you locate these areas, and often pinpoint the crappies too.

Two different riggings work well. The first set-up simply consists of a cylindrical bobber, a split shot or two and a fine-wire hook, size #1-4. Lip-hook a 1 ½-2 ½ inch minnow and drift over likely areas with floats adjusted to cover different levels from six to 10 feet or deeper by tying a bobber-stop on the line.

The second set-up for drift fishing is the “tight-line rig.” This consists of a 1 to 2-ounce dipsey or bell sinker attached to the end of the line, and droppers 18 and 36 inches above that with minnows for bait. The sinker bounces on the bottom while the baits float up higher in the strike zone. This rig lets you make sure your offering is just off the bottom as you feel the sinker knocking on the lake floor. That’s typically where many early-spring fish are holding, especially on days after a cold front.

Keep a marker buoy handy. If several fish strike in one area, toss it out and then re-drift through that spot. On days when the wind is too calm for drifting, troll slowly with the electric motor or gently scull with a paddle.

From mid to late March, fish move a bit closer to spawning areas but not actually on the beds, except for a few “scouts.” Comb-casting the transition areas is a great tactic now. A number of lures will catch these more active fish such as small crankbaits, spoons and spinnerbaits, but no artificial will top the humble jig. Since crappies can be picky about which jig they prefer on any given day, though, it pays to stock a variety of these lures.

Weights can range from 1/64 to 1/8 ounce, with 1/16 and 1/32 usually best. Chenille-bodied jigs with a marabou tail can be deadly. More often than not, however, soft plastic bodies adorn crappie jigs today. Try stubby bodies and short or stiff tails on cold days, fluttering twister-type tails when waters are warm and fish are more aggressive or if the water is cloudy. Also stock a few weedless versions such as the Charlie Brewer Slider design. Best colors are chartreuse, white, black, yellow, smoke, pumpkinseed and hot pink.

Focus on water just off from the brushy cover-rich areas where crappies spawn, in 8 to 12-foot depths. With this tactic you’ll be fan-casting to probe lots of water and locate fish. A light weight 6 to 7-foot spinning outfit with 4 to 8-pound line is the perfect rig.

Reel slowly and steadily. Every now and then you can pause and let the lure drop back deeper, but no jerking or twitching. The smoother the retrieve the better.

Search the Shallows with Minnows

When the majority of crappies move in tight to cover and begin the spawning ritual, it’s time to pull out a fly rod, special “crappie rod,” or an old-fashioned bamboo cane pole. The length of these fishing tools, 9 to 10 feet and up, gives you “reach” to gently flip minnows back into pockets in brush and drop them next to logs and dock pilings where crappies spawn, without actually casting. That allows precision accuracy.

Cover, especially woody structure such as brush piles, logs, flooded trees, dock pilings, and beaver huts, are the places to target now. If wood cover is scarce, fish next to weed beds or bridge abutments in 4 to 8 feet of water. Special fish structures planted and marked in many DWR lakes are great spots to try. Bridge pilings can also be good, especially the spans in shallow water.

This tactic for actively spawning fish involves moving from one piece of structure to the next, flipping minnows positioned 18 to 36 inches below a float into openings you couldn’t deliver a cast to. Extend the rod, then drop the minnow straight down. When a fish strikes, wrestle the thrashing quarry quickly out of the tree limbs.

Use a cylindrical float and a fine wire hook with a split shot or two a foot above the bait. Keep the line extended 1/2 to 3/4 the length of the “pole,” the perfect length for flipping the offering into openings. If a fish is there, you should know within one or two minutes. If nothing strikes, lift the bait straight up and drop it carefully down beside the next piece of cover. Scull with a paddle or use an electric motor to move from one piece of wood to the next along the shoreline. 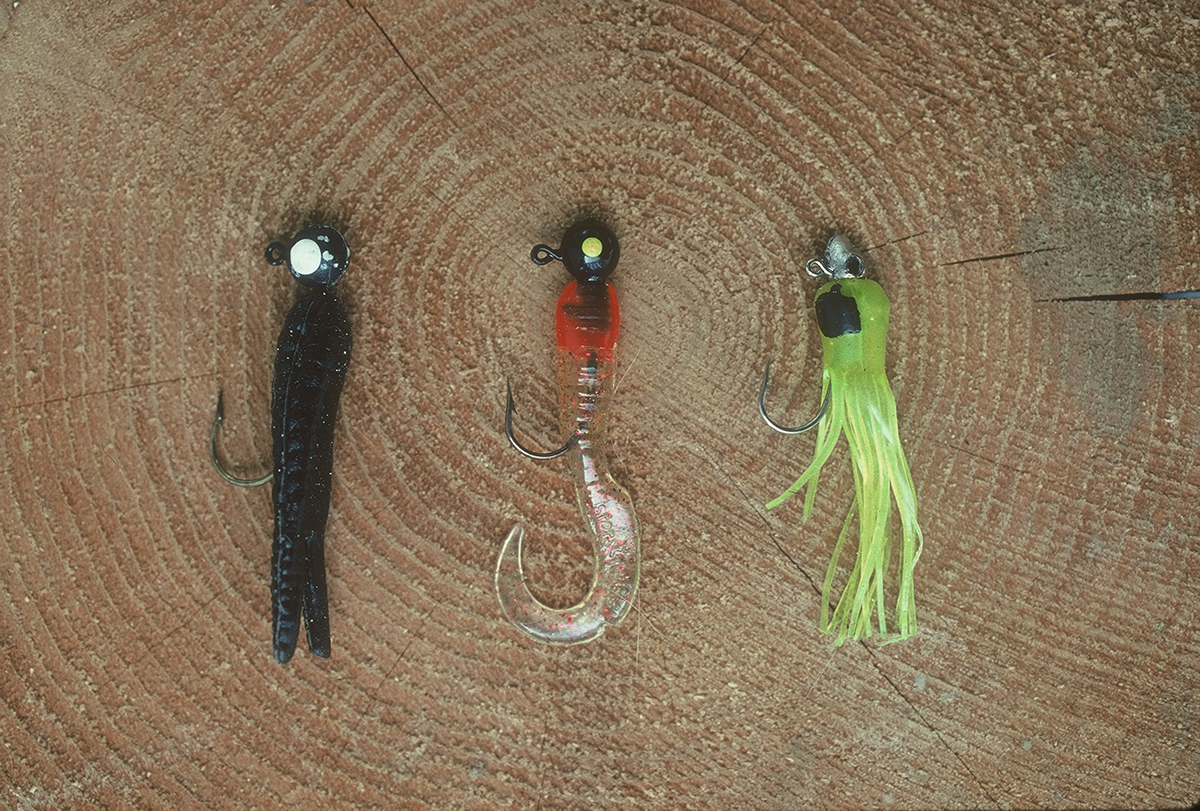 Dap the Brush with Jigs

This is an exciting tactic if you prefer using “artificials” over bait. It’s basically a variation of the technique described above, using small jigs instead of minnows. Simply tie on a tiny jig in the l/8 to 1/32-ounce range and lower it down next to flooded trees, stumps, beaver huts, weed beds, and docks in the shallows.

At this point you’ll probably be tempted to jiggle or twitch the lure. Don’t! Instead, hold it steady next to the cover. Your hand is actually trembling and shaking just enough to give the jig a very life-like, quivering motion, something like a minnow rotating its pectoral fins. That’s usually enough to draw thumping strikes from any nearby crappie protecting its nest.

After holding it steady next to the cover, slowly swim the jig around to the other side of the tree or piling. Pause a few seconds there, then lift the lure up and plunk it down near the next piece of cover. This method lets you probe the very best flooded brush quickly and usually results in a heavy catch by day’s end if the fish are in the shallows. Whether it’s hunger or territorial instinct that makes them strike these jigs is hard to say, but strike them they do—often belligerently!

Keep these four strategies in your arsenal of fishing tactics and you should be well-equipped for the challenge of catching Virginia’s most popular panfish this spring.